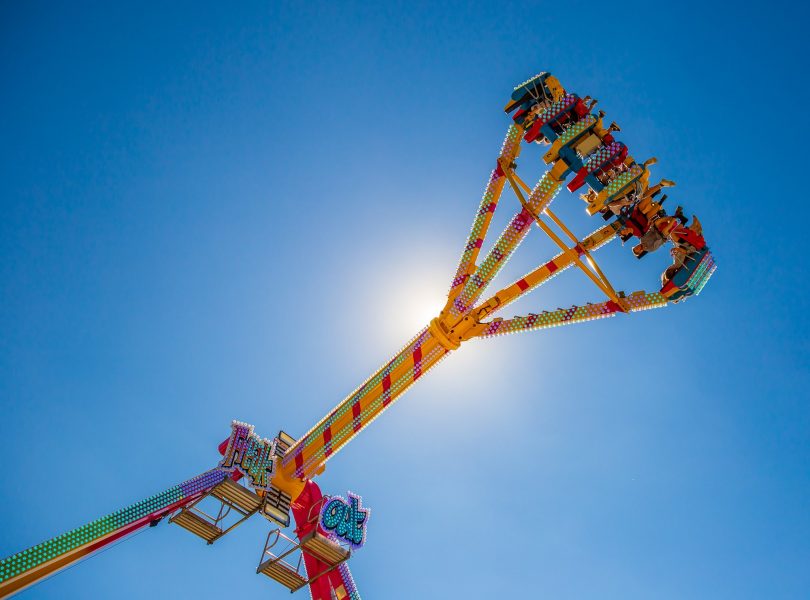 The Show is back – that’s the big take-out after years on the slide, with attendances just shy of 50,000 over the weekend and a big increase in families through the gates.

This year’s cut to ticket prices did the trick with the early numbers showing a 25 per cent increase in attendance, and a 150 per cent boost to sales of family passes.

Brilliant weather and a re-imagination of the Royal Canberra Show driven by new CEO Athol Chalmers also made a difference, and while not everything went to plan, the course is now set for the Show of the future.

Mr Chalmers said there was now a solid platform to build on, and he was already thinking about expanding the main arena entertainment with fresh events.

“The next thing is for me to go to sponsors, now we’ve got a product which is on the improve, the numbers and feedback are good, it gives us an opportunity to get some additional sponsors on board.” 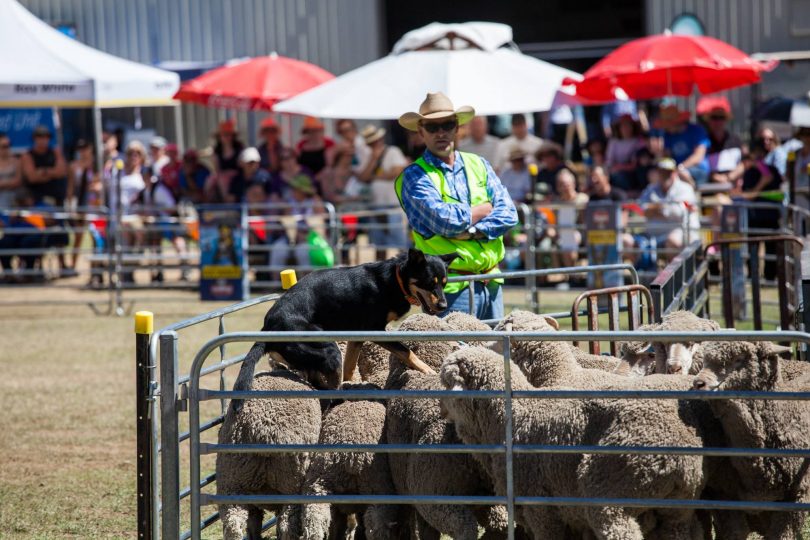 And he had a message for the ACT Government which is about to embark on a review of Exhibition Park – “don’t move it, invest in it and build a better entertainment precinct”.

“They should be turning EPIC into a world-class arena. It just needs investment, some of the buildings and facilities are a bit old and tired,” he said.

Mr Chalmers said Sydney connections had praised the site, saying it was a fantastic venue to build on.

He said it could also be a conference and trade show venue, and with light rail running past it, EPIC will be even easier to get to and from. 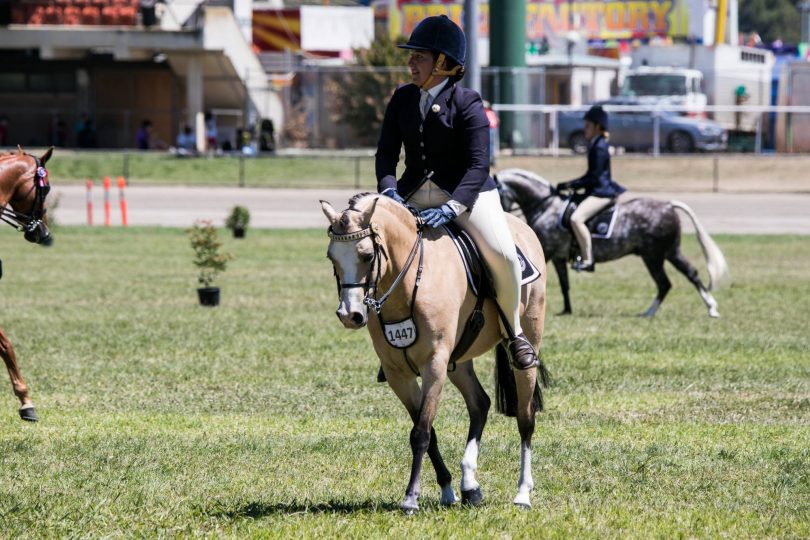 With 2700 horses and 4000 events the horse section was the biggest ever.

Ironically, the light rail works may have been part of the problem over the weekend when getting into EPIC and finding a park proved difficult.

Mr Chalmers said there were long queues and waits to get a parking spot and some even turned around and went home.

Access will be easier when light rail is operating but he flagged creating more parking spots and talking to the police and Government about managing the traffic management issues better next year.

Mr Chalmers also flagged finding a better location for the new Canberra On Show community event which had difficulty drawing people to the top end of the park, despite the talent on offer.

He said many people tended to walk past on their way to the heart of the show without stopping, and some stall holders were disappointed.

“The concept is still a really good one, it’s just getting them in a spot where there is more traffic going through,” Mr Chalmers said. The woodchopping returned to big crowds.

But overall exhibitors and vendors were delighted with the 2019 Show and convinced that it was on the right track.

Entries were mixed but with 2700 horses and 4000 events the horse section was the biggest ever, while cattle and sheep held their own despite the drought.

“One of the things that came out was that for a lot of farmers, it’s an opportunity to get off the property and spend some time talking to their buddies rather than being isolated on the farm worrying about the drought,” he said.

The woodchopping returned to big crowds and its popularity meant that it was likely to be a three-day event next year.

Mr Chalmers said he expected the Show to be back in the black but it would take the next two or three weeks to establish its financial position.

I’d have no problems so long as they built a new epic nearby. The current state of that place is plain awful.

Pretty standard for any Canberra event !!

Parking chaos?? That pales into insignificance when you compare it to to the main entrance having two only, yes two windows open for ticket purchase. Farcical situation…

Karen Mathias Zaveri….this ride even make it to the news!!! Hahaha wish i could go on it again!

We had a great time.

I hope they expand the EPIC train station. It might be too small for crowds

Was pleasantly surprised this year. Had a great afternoon with my wife and some friends. We went just after midday on Saturday and there were next to no queues for parking. Needing cash for the carpark was frustrating, it was the first time I haven’t been able to PayWave something in about 6 weeks. (I know, first world problem)

I was impressed with the show. They let my girls in for free early Sunday morning and we used the money to buy extra show bags. The value of the show bags actually surprised me as well, especially many of the lolly ones. As my kids pointed out, a few single items were a few dollars each at our local Woolies, and there were loads. My kids had a blast. We paid $5 for parking and had no problem, perhaps because we came early. A few extra discounted eateries would be great.

if it’s running by then…

We loved it. Would love to see the D-Max routine change though – it’s getting very old and tired. The farmers were great letting us get up and close to the livestock- our 1 year old loved the cattle.

The drop off/set down point on one side of the road only just added to the woes. Cars trying to turn around and travel back was silly.

I luckily took the $20 VIP option at Kamberry car park across the road. There were heaps of spots. Saved myself half and hour of the car pile up and only an extra $15. Totally worth it. Five minute walk to gate 2

I packed a sandwich to compensate not buying food. So came out pretty even in the end

Or save your money, your mind and your time. Just don’t go.

The traffic jam to the parking was ridiculous. Glad we just went across northbourne and parked in the residential area.

Simple idea, close Flemington road between Federal Hwy and Randwick Rd, divert all cars to either Morrisset or old well station and have heaps of parking around the back and then have a ticket gate/entry at the back. There’s heaps of space on that side for parking, anyone getting the bus or light rail can get dropped off at the front entrance

Mat Barber there was heaps of parking at the back and a ticket gate there.

Didn’t have any problem parking – it was very slow to get into the car park though. Not sure why.

Parking? Really?
Not the price of food. 2 dagwood dogs and 2 bottles of coke $26. I was more pi$$ed about that. Then parking

Sammie Davis I thought food price was ok. Gourmet pulled pork sandwich for 13 I thought was reasonable. Is a dagwood dog gourmet or crap? Serious question…dont know what it is.

Eric Tenthorey I’m not sure if anyone anywhere has ever mentioned a dagwood dog and gourmet in the same sentence. You may well be the first. 😉 You’d know it as a corndog or pogo.

Sammie Davis the market will set its price based on the price it can get from the public Vs the costs of doing business – some costs are out of the stall holders’ hands.

Those Carnies aint dropping those prices..

Omg me too I never have dagwood dogs unless im at the show and couldn’t believe the price of them.

It was great to see the Canberra community come back to the Royal Canberra Show. Some major changes were implemented in relation to ticket prices and bringing back events such as woodchopping, the Art Show and the Racing Pigs … also adding over 45 local acts to the program. Much more will be implemented to make the 2020 Royal Canberra Show even better.