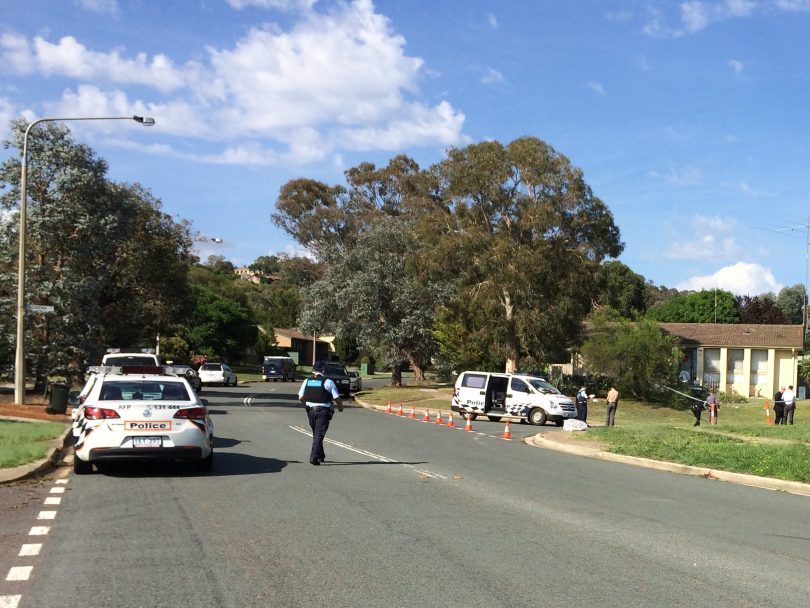 Police at the corner of Casuarina and Goodenia Streets about 9:30 am this morning. Photo: Ian Bushnell.

Police are investigating a suspicious death in Rivett early this morning after a badly injured man was found at the front door of a residence in Goodenia Street.

Detective Station Sergeant Matthew Reynolds said the dead man had apparently made his way to the Goodenia Street residence for assistance but those living there were not involved in any way.

He said police had not identified the man or where he was from, and would not say how he died, other than to say it was not from gunshot.

They were called to the residence about 5.25am and attempted to give first aid to the injured man. The ACT Ambulance Service arrived soon afterwards and treated the man but he died at the scene.

Police established a crime scene and sealed off Goodenia Street, with police blocking the entry from Casuarina Street and from about midway down, coming from Burgan Place.

They have been scouring the surrounds looking for something, which might be a weapon. Late yesterday afternoon police were seen searching a drain in nearby Bangalay Crescent.

Detective Station Sergeant Reynolds said at this stage the death was not related to Outlaw Motorcycle Gang violence or a drug deal gone wrong. There had not been a late night party in the area.

He would not identify the residence where the man had been found. On one side are two-storey townhouses, with detached single-storey houses on the other.

He said the residents of Goodenia Street were assisting police with their inquiries and police were urging anyone who may have witnessed any suspicious activity in the area between 3 and 6am to contact Crime Stoppers on 1800 333 000.

Goodenia Street remains sealed off, with streets and access points taped off and desks and a gazebo sun shelter set up.

Specialist Response Group officers, detectives, forensics and uniformed officers were at the scene, with many police cars and vans parked along Casuarina Street.

I recon its mc related for sure

Bill N Dee Norton hope you are both ok!

Matt Lyons we chose the right weekend to be in Melbourne

Jayde Parker were you close to here last night?

Dry sad especially before Christmas bad enough any other time . WhT is this world coming too

UPDATE 1:45 pm – ACT Policing are conducting investigations in relation to the circumstances surrounding the suspicious death of a man in Rivett early this morning.

they reckon he got bashed to death with a baseball bat

Shannon are you in Rivett?

KB Brusensky is it her street?

Samantha Maree near you?

I think I left the iron on

Abbie McMillan-Maher what did you do