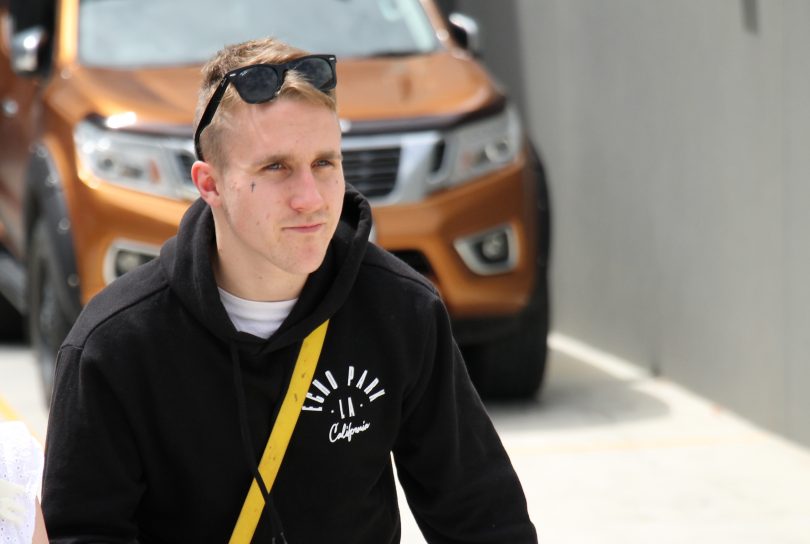 Aaron James Campbell, 22, was allowed to leave custody after he was sentenced. Photo: Albert McKnight.

Confronted by a bystander over shoplifting, a robber with a distinctive cross tattoo under his eye lashed out and slashed at one of his victims with a fishing knife.

Aaron James Campbell, 22, was spared extra time behind bars when he was sentenced in the ACT Supreme Court on Tuesday (14 December), having pleaded guilty to aggravated robbery.

Acting Justice Richard Refshauge said Campbell had gone to the IGA Supermarket at the O’Connor shops on the night of 4 August 2021, then left without paying for several items, including a $15 phone charger.

The store’s owner saw him leave and gave chase, but when he caught up, Campbell punched in him the face, knocking him backwards.

A bystander sitting in his car saw the incident unfold then tried to apprehend Campbell outside the Duxton Hotel.

READ ALSO: Driver’ snapped’ and bashed passenger, leaving behind clumps of hair on the road

However, Campbell pulled out a 10 cm fishing knife and swung it at him, narrowly missing the man’s neck and cutting a small hole in his hoodie.

He then dropped the knife and fled, chased by the man for a while. He handed himself into police several days later.

Justice Refshauge said while the bystander had been “slashed” with the knife, he did not receive any injuries, although he did note the shop owner had been punched in his head, a vulnerable part of the body.

He said Campbell had been in custody since he was arrested, although he served three months of that time for other offences.

Justice Refshauge said he was dependent on methamphetamine and probably cannabis and his drug dependence had substantially contributed to his crime.

Campbell was sentenced to two years and four months’ jail, but the remainder of his jail time was suspended for him to undertake a two-year Drug and Alcohol Treatment Order.

He was released from custody and told to admit himself into a drug rehabilitation program by the afternoon.

Justice Refshauge told him he would be dependent on drugs forever, but his ability to manage was possible.

“It will be hard work. A dependency is not easy to get on top of,” he said.

“If you can successfully meet those challenges and address them, then you will be stronger for it.”