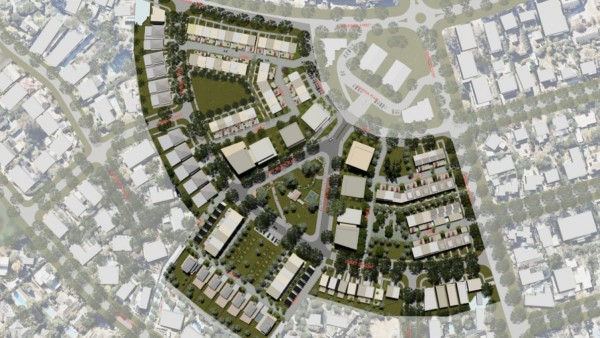 The future of the large public housing precinct behind the Red Hill shops is clearer today after the ACT Government confirmed it has lodged a development application setting out its revised plan for the site allowing for a maximum of 252 dwellings, scaled back from its original plan which allowed for more than 550 dwellings.

The DA allows for 108 single residential blocks of various sizes as well as between 83 and 144 multi-unit dwellings.

Height limits for single residential blocks vary between two and three storeys under the plan while the multi-unit sites will be limited to four storeys.

The original plan for the site allowed for heights of up to six storeys.

The Government faced a backlash from Red Hill community groups during 2016 over their initial plan and last December announced the scaled back version it has now taken to the DA stage.

Demolition of the existing public housing buildings is set to commence shortly once all tenants have been relocated, with blocks expected to be released for sale later this year and in 2018.

“The Red Hill community’s input through a number of workshops has helped create an estate development plan that will provide the opportunity for a variety of housing options and high-quality public spaces,” Mr Gentleman said.

“The community’s feedback led to changes to the draft plan to use the natural landscape of the hillside for a mix of housing types, including terraces and medium-density apartments, and high-quality parks.”

The DA includes a planning control plan designed to ensure the overall design intent is achieved.

The full DA is available for viewing here and at the Land Development Agency’s offices, 16 Challis Street, Dickson, between 8.30am and 4.30pm Monday to Friday.

Pictured above is the concept master plan from the development application.

Herman Riet - 22 minutes ago
Paul Muscat There is a group on Northside in the new suburbs called Friends of the Park I tried ringing & leaving message the... View
Troy Dare - 2 hours ago
Rien Wiersma - Most of the grass we’re talking about here is weed species...which invade the bush capital. And you’re rig... View
Seti Saenz - 2 hours ago
Trish Hunt It has been raining a lot so it makes sense it is so tall. We are building a house and the builder has to keep can... View
Public Sector 33

Jilly Beans - 32 minutes ago
Michael Miitze yes true- consultants always look so surprised when you take them to task on something! View
Michael Miitze - 42 minutes ago
Jilly Beans agreed, but the APS does itself no favours. They are so passive and poor at contract negotiations and management. View
Ben Stevens - 3 hours ago
"the increasing reliance on labour hire and consultancies is based on Coalition hostility to public servants and the public s... View
News 21

@the_riotact @The_RiotACT
The @CPSUnion is concerned about an ACT Government data breach that potentially enabled #sensitive health data of 30,000 ACT #publicsector employees to be publicly available for three years https://t.co/N5EhD2peS6 (56 minutes ago)

@the_riotact @The_RiotACT
The battle lines are drawn. Who do you know that needs to get drenched? The Great #HaigPark Water Fight is back, with this month’s Play Outside Day to transform Haig Park into a #waterfight arena https://t.co/XVI03UjeCX (14 hours ago)