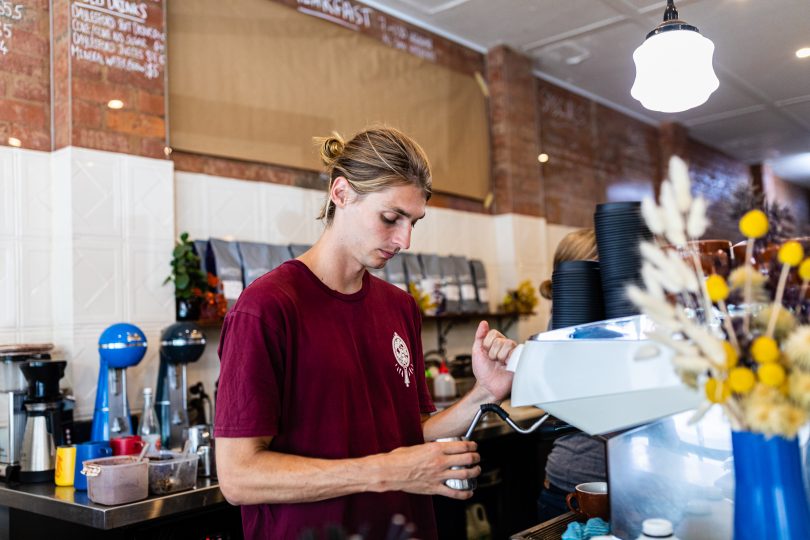 Hayden manning the coffee machine at the Stand By Me cafe at Lyons shops. Photo: Daniella Jukic.

Lyons has all the important features of a much-loved suburb: a central location – it’s around 8km from the city, local shops and cafes, walking and cycling paths and plenty of open space.

The Woden Valley suburb is an ideal location for anyone who wants to live close to essential services, sporting facilities and public transport, as well as those who seek a fast commute to Woden’s government offices.

With its proximity to Woden Town Centre and major transport corridors including Hindmarsh Drive and Adelaide Avenue, Lyons offers an enviable location for its residents.

Thinking about visiting or moving to Lyons? Here’s what you need to know.

Lyons is a hilly suburb surrounded by nature reserves. Established in 1966, it is named after Joseph Lyons, the tenth Prime Minister of Australia. The streets are named after locations in Tasmania: Joseph Lyons was Premier of Tasmania before he became PM.

The family-friendly suburb is known for its neat and tidy appearance and strong community feel. It’s currently experiencing something of a building boom, with knock-down-rebuild projects making the most of large, established blocks and several apartment complexes springing up around the suburb in recent years. 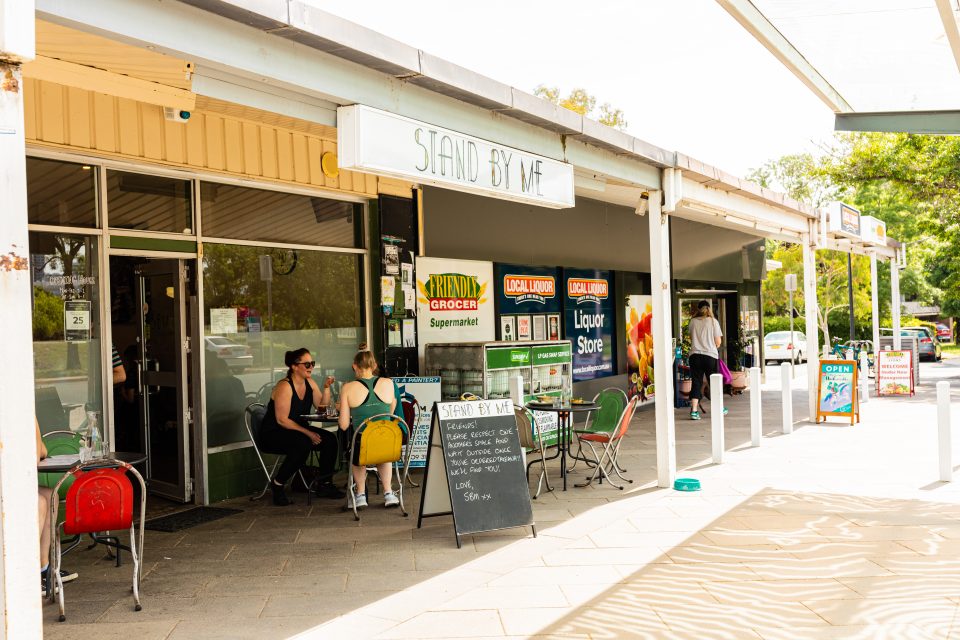 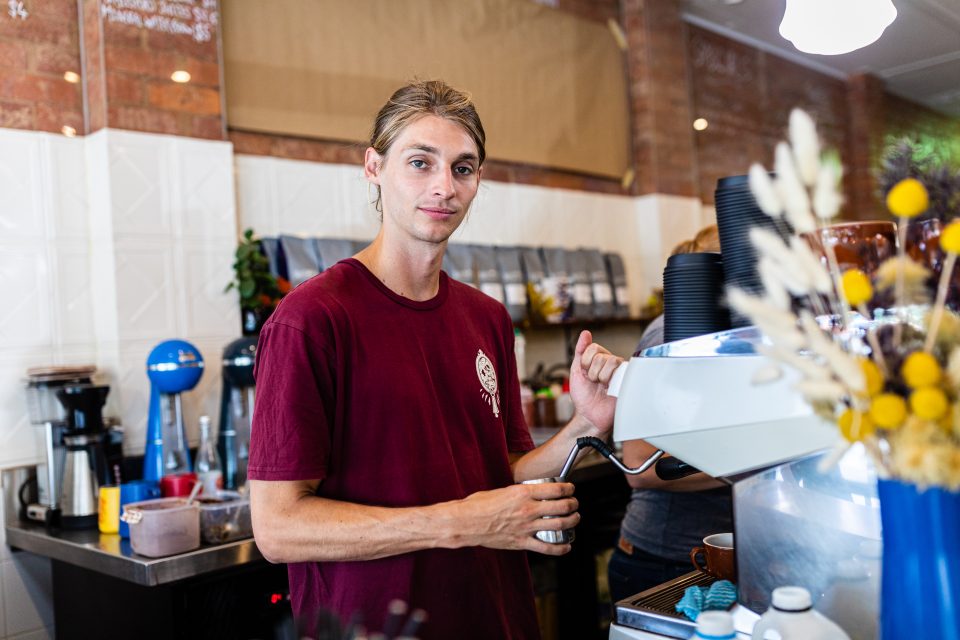 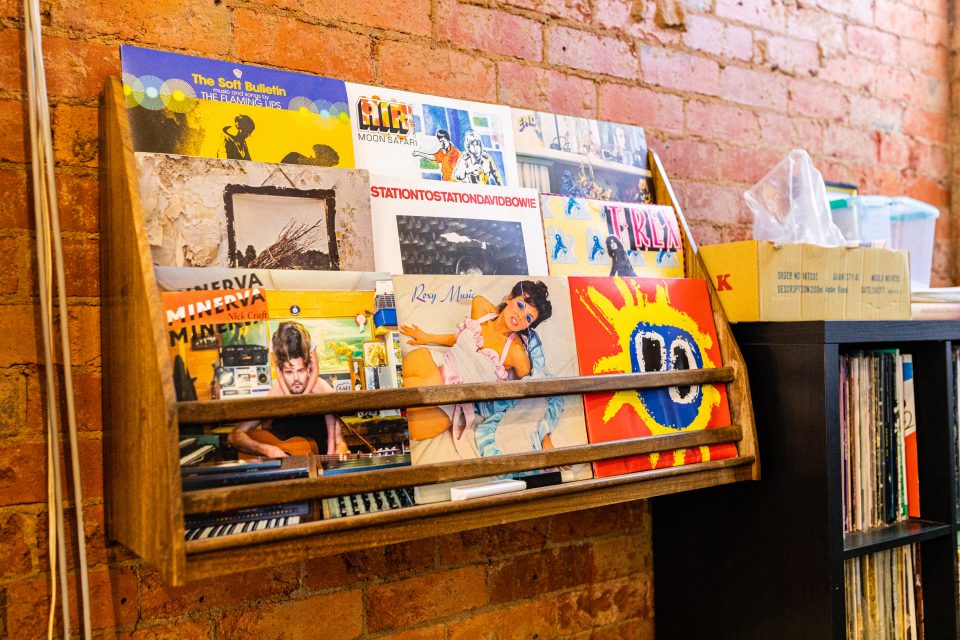 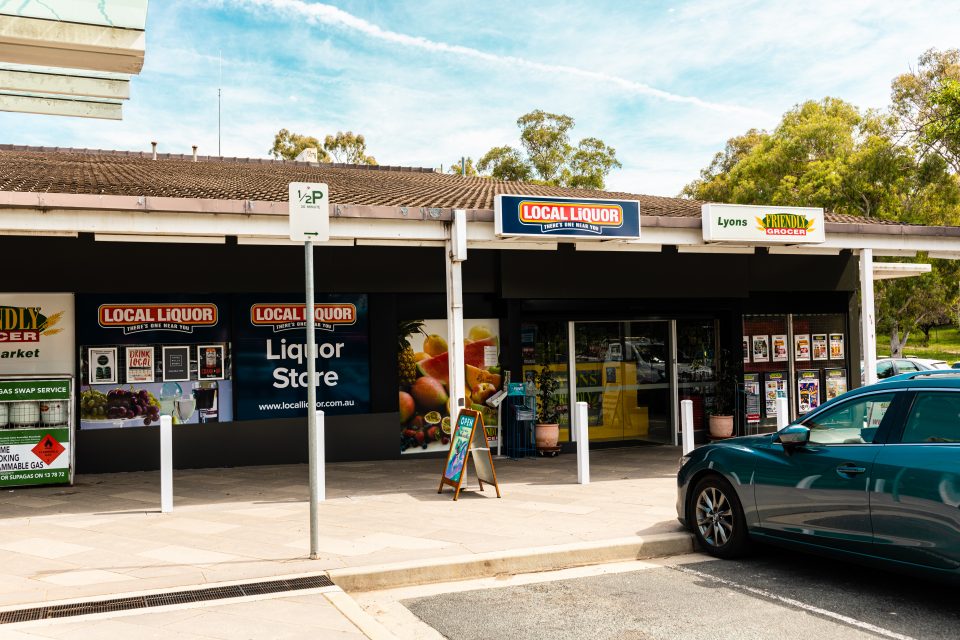 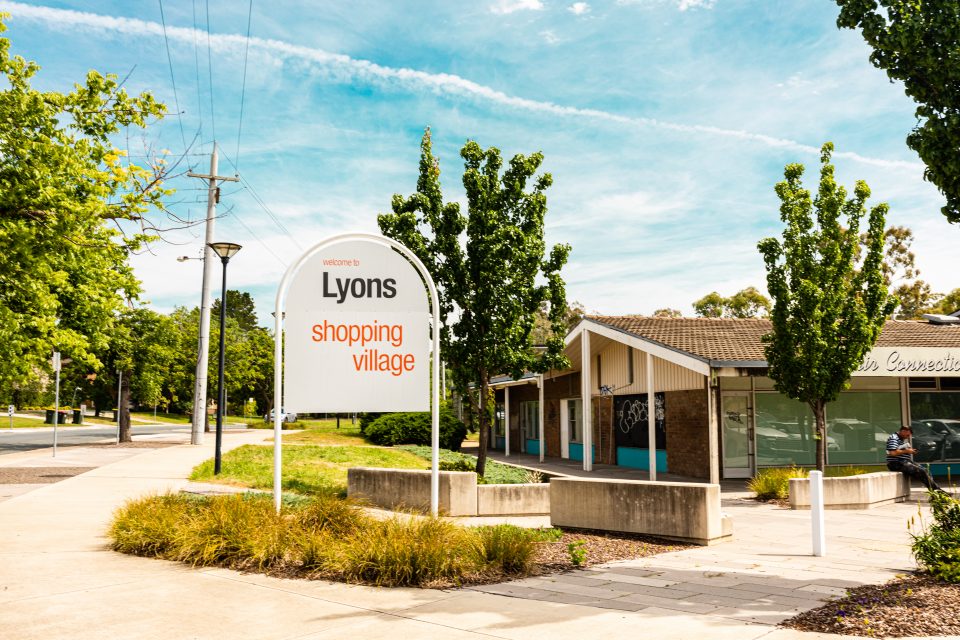 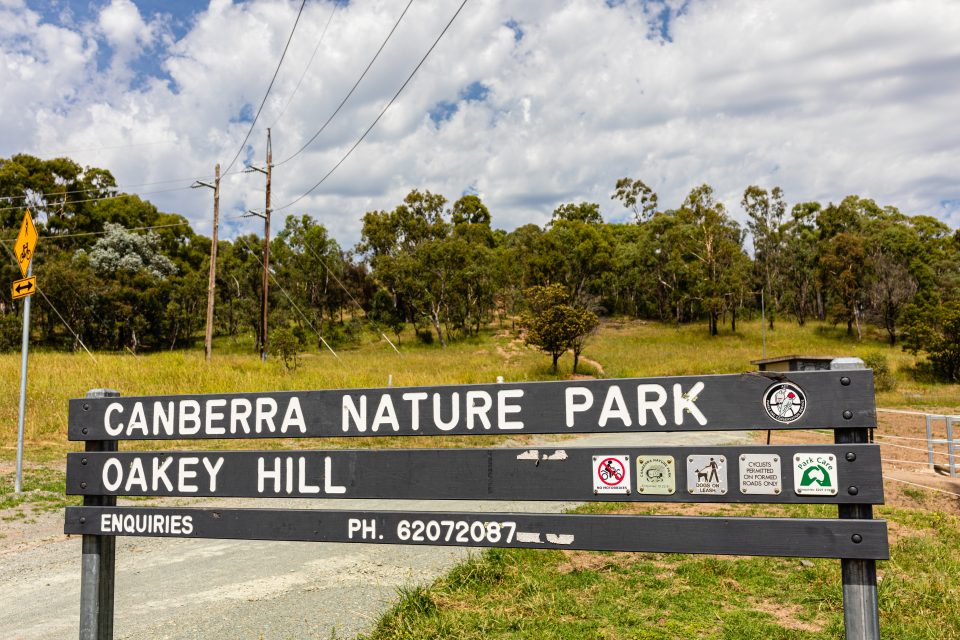 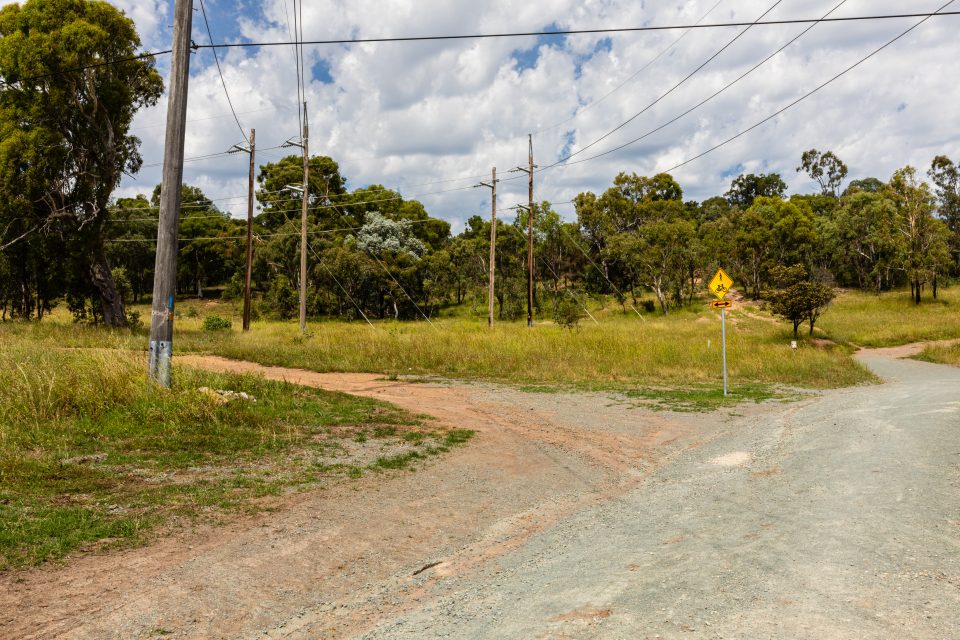 Lyons has a small local shopping centre with an IGA and the popular Stand By Me café.

Just over the road, and adjacent to the suburb, is the Woden Town Centre. It’s a major shopping centre with a Westfield and an array of supermarkets, retailers, eateries and entertainment venues.

Woden’s dining scene was rejuvenated in 2019 with the launch of Westfield’s Bradley Street dining precinct, featuring several new places to eat, including as Fenway Public House. Westfield Woden is also a great spot for enjoying international cuisine – from zucchini balls at Turkish Pide House to beef madras at Flavours of India. Space Kitchen is a favourite breakfast destination as well as a cake shop and patisserie. And the best thing? All of these venues and many more are just a short stroll from most parts of Lyons. 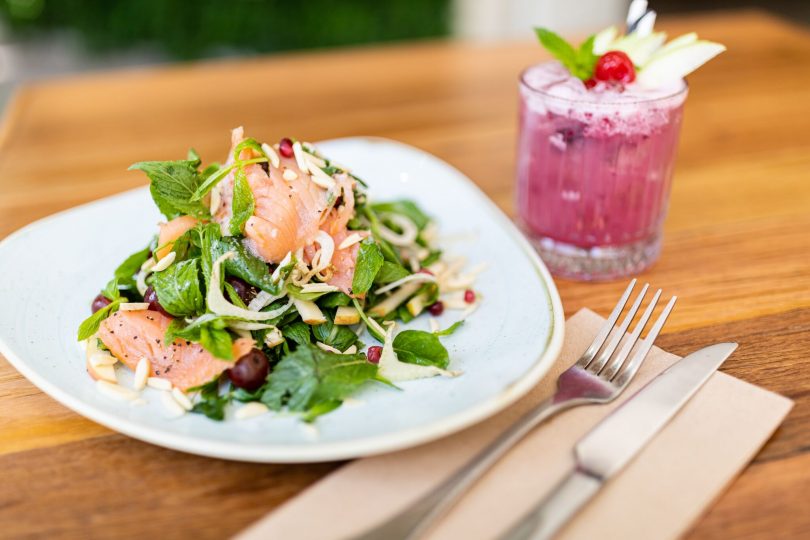 Fenway Public House, down the road in Woden, offers a great range of meals for lunch and dinner. Photo: Daniella Jukic. 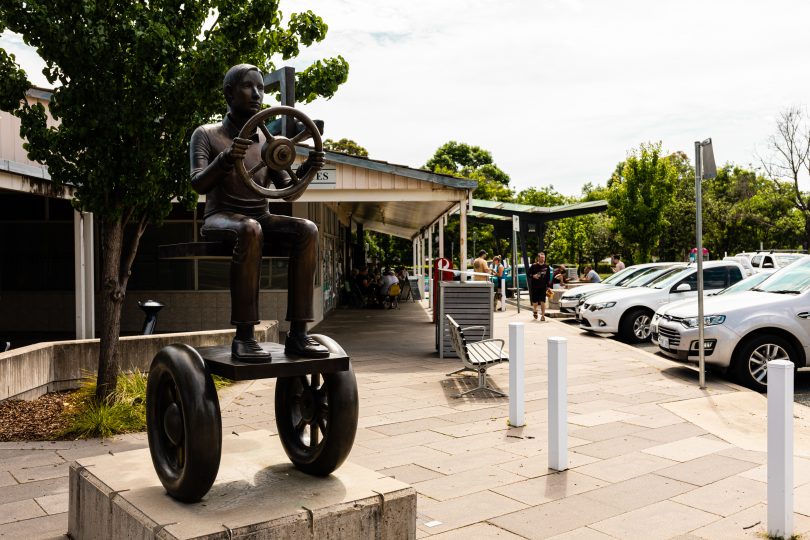 On the Road Again by Anne Ross is on display at the local shopping centre. Photo: Daniella Jukic. 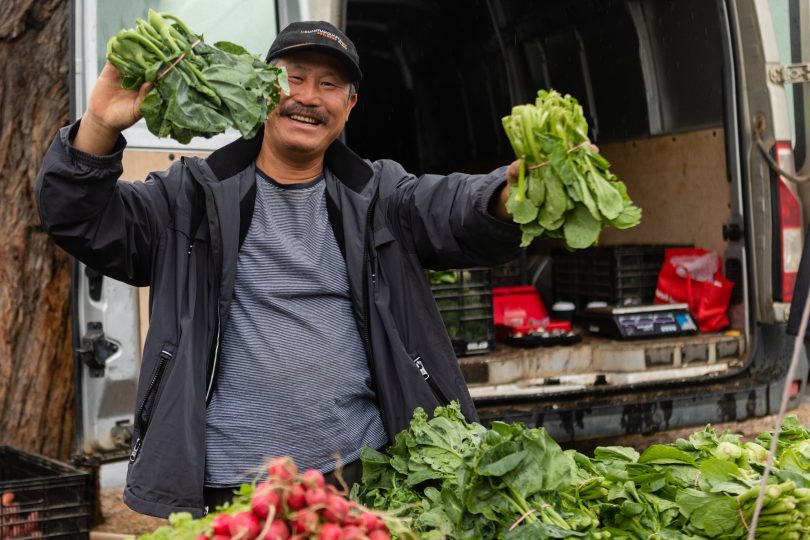 Pick up some fresh vegetables and fruit from the Southside Farmers Market on Sunday mornings. Photo: Daniella Jukic. 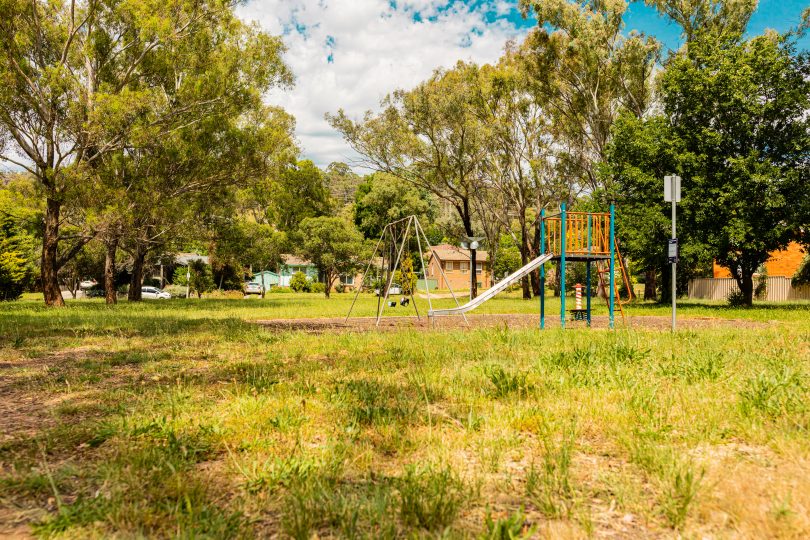 Whether your preferred mode of transport is car, bus, bike or your own two feet, chances are you’ll have no trouble getting around if you live in Lyons.

Transport Canberra buses run through Lyons, including routes R4, R5, 58, 62 and 66. Woden Interchange is a short stroll from most parts of the suburb, and from there, regular services run to all parts of Canberra, including the major centres of Tuggeranong, Civic and Belconnen.

Bike enthusiasts can take advantage of the area’s bike paths and on-road bike lanes to access many of Canberra’s popular routes. 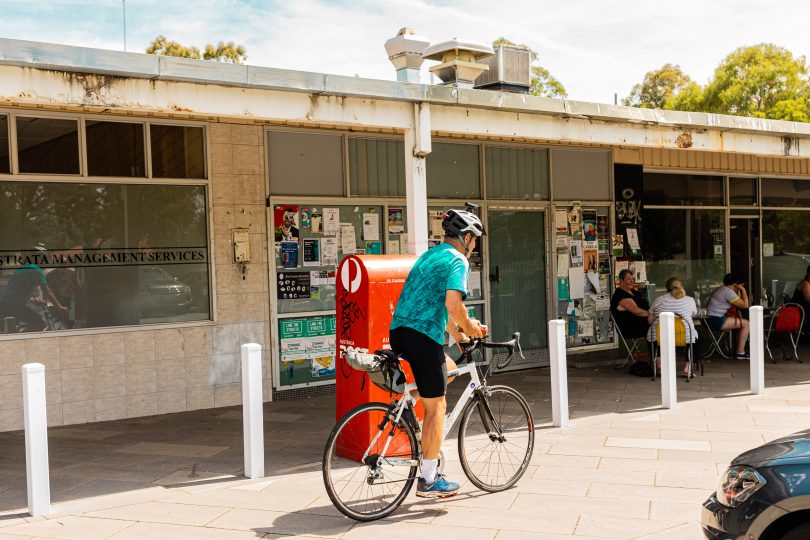 Locals love to ride to the local shops at Lyons. Photo: Daniella Jukic.

Lyons Early Childhood School is one of six ACT schools that apply an innovative early childhood school model, catering for children from infancy to Year 2 with its childcare and educational programs.

Other nearby schools include: 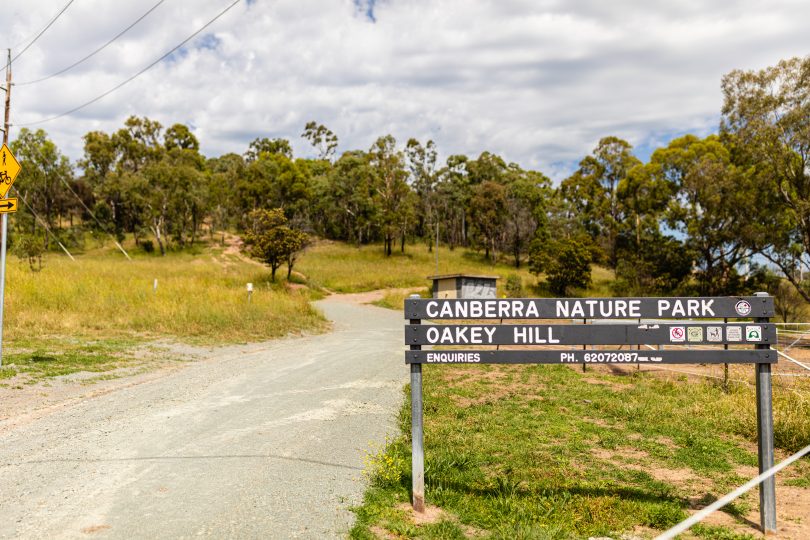 “Lyons has always been popular but is becoming increasingly so,” says Mark Wolens, from Independent Property Group Woden and Weston Creek. “Its appeal is growing, especially with the revitalisation of Woden, including the new bar and restaurant precinct.” 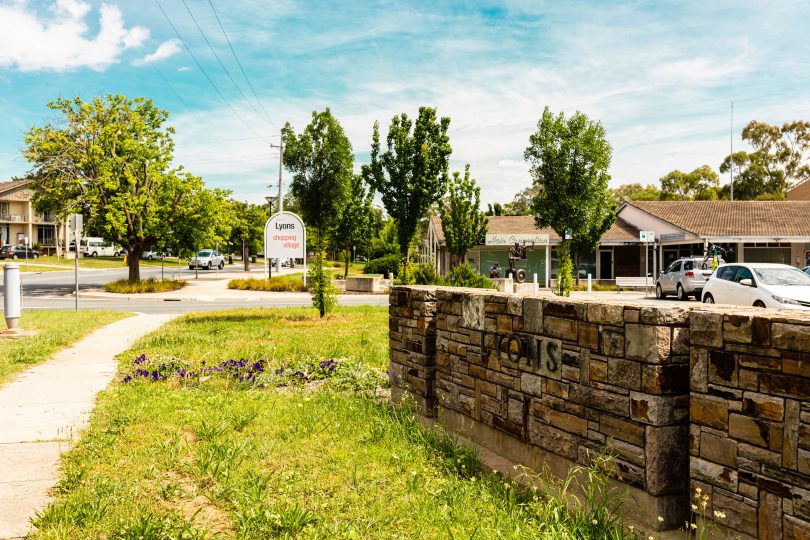 Why do you love Lyons? Photo: Daniella Jukic.

Want to find the latest real estate listings for sale and rent in Lyons? Zango can help you find them:

Do you live, or have you previously lived, in Lyons? What are your favourite things about the suburb? What advice would you give to people considering moving there? Share your thoughts in the comments below.

Lyons, ACT is also situated nearby the diplomatic quarters and departments of foreign affairs. The majority of traffic to and from the southside suburbs of Canberra passes through the midland suburbs of Woden Valley, ACT. Lyons, ACT contains its own town centre containing professional services and goods from all over the world.

Before they demolished the Burnie St Flats Lyons had a bad reputation. Curtin residents near the border with Lyons reckoned the burglary rate dropped dramatically after they were bulldozed & I know a Community Nurse who was afraid of going there on her own.

I know the SBM guys. Lyons has had a massive turnaround – used to be home to some of the dodgiest flats in Canberra. It’s a suprising thing that cafes have real value to local communities. They are the standard meetings places these days – as perhaps the pub once was. We are waiting, and waiting, and waiting for shops and a cafe in Giralang, so we too can have a central hub in our community.

Blake Anthony Cross - 4 minutes ago
Great read bit depressing as well.. all sport stories are.. this is why we haven't cured cancer to busy talking to people not... View
Kacey Butterworth - 11 hours ago
I feel extremely privileged to have had Ben as a mentor, teacher and year co-ordinator throughout my high school years. He ta... View
Annamaria Zuffo - 14 hours ago
Fantastic Ben. Lucky kids and us for knowing you. View
News 14

Fran Bink - 7 minutes ago
Unsung hero 👏🏻 View
Soledad Berenguer - 8 minutes ago
Well deserved! View
Jan Gowing - 18 minutes ago
Congratulations....so well deserved. He is an inspiration to the community. I remember Ricky when he was a sports teacher at... View
Community 5