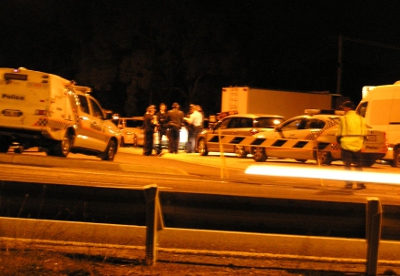 The shiny new ACT Policing website is silent on the subject but ABC radio reports there’s a siege underway on Dickson Drive in Holder.

If your kids can’t get home on the buses they will apparently be kept for you at Canberra College.

UPDATED: “fgzk” has sent in the above photo along with these thoughts:

The area is very calm. I talked to another local walking the dog his only statement was that “they oughta gas him out, none of this waiting just gas Im ” The police are well organised and even from a distance reek of profesionalism. I was the only spectator so I left. I would say its a waiting game now.

In the comments we also have unfounded scuttlebutt that the barricaded man has some sort of improvised explosive using gas bottles.

My condolences to everyone stuck in a college hall tonight. I hope it’s well heated.

FURTHER UPDATE: The ABC brings word that the siege ended around 1am this morning.

A man apparently in his sixties [Turns out 75], walking with a cane, walked out and was taken away for a chat with police. Apparently there was a family dispute of some sort. TV news reports last night seemed to indicate a government agency had been involved.

No update yet on the AFP’s shiny new website.

Another Update: The AFP have now provided a media statement. The site has not yet been made safe and residents are unable to return to their homes.

One more update for the road: The Canberra Times brings word that one Erwin Klinger has been charged with threatening to damage property. He’s been remanded in custody.

40 Responses to Siege in Holder
Filter
Showing only Website comments

I’m reliably informed you can tie balloons to your house and move it to free land in South America.

UP UP and away

I’m reliably informed you can tie balloons to your house and move it to free land in South America.

i think it’s really sad that a 75 yr old man is now homeless – no wonder he refused to leave his home. disgraceful really that a community treats their elderly this way – he had debts i hear – who hasn’t but where the hell is he going to live now. poor man, where’s the compassion etc….

Today’s Canberra Times reports that Mr Klinger had been declared bankrupt and was to lose his house. The Sheriff’s Dept had turned up to evict him and change the locks so he barricaded himself in to prevent this from happening. The police were called because of this along with the fact that he threatened to kill or harm all persons that were in the house with him (for the record, no-one was in the house except him).

That explains why all this happened. And it also explains why there are notices plastered all over the front windows.

I do feel for him – fancy being 74 and being told that you would now be homeless. But I can’t help feeling somewhat more sorry for all the people he displaced as a result of him refusing to leave what once was his home.

Given the sad nature of the event, i would say that this would possibly not be the last time that we see something like this happen. A terrible thing to lose ones home.

That crazy Klinger. He’ll do anything to get sent home from the war!

I’m with Thumper (#23) on this one.
I barricade myself in my house every night but I don’t make a song and dance about it.
Smells a bit “gassy” sometimes though…

The man is deaf… knock knock… come out Mr. Klinger..

Yeah, what are the chances?!

He didn’t even have any hostages, and they wanted to know what his problem was. So ideally you’d want to talk him out, not shoot him out or freak him out with teargas and explode him out!

Besides police mentioned that he said things they wanted to hear more about. He might actually have useful information about freaky Canberra happenings.

Don’t forget the deaths of a third of the hostages.

And have a 70% mortality rate? That incident was a disaster, not the best example.

And here I was thinking…Weston is one of the quieter areas of Canberra :(Thanks for dispelling that myth for me.

That statement has left me speechless. I hope it’s a joke.

Otherwise fgzk is a cop.

I’m perplexed as to how you hold a seige?

Do you lock your doors and hope someone notices? Maybe ring the police and tell them, “hey guys, I’m having a seige”.

Maybe you lean over the fence and casually mention it to your neighbour?

come on now people there has been no big explosions in duffy since the petrol station ! i would say it’s less dangerous but a more exciting suburb

I told my parents – despite all their stirring Tuggeranong is much safer – the last few incidents have been in weston creek! Glad it is over, pity the people in temp accommodation last night, unfortunately we will probably nevery know the real story.

consumeradvocatecanberra - 8 hours ago
Most folk don't get it. Canberrans love their cars and have done so for 30 years. It's quick and convenient. But, imagine car... View
Lucy Jane - 8 hours ago
4 day week for everyone but everyone gets a different day off. Will help immensely with traffic congestion and has been trial... View
Ronnie Adams - 13 hours ago
Helicopter 🚁 View
Community 15