Significant Canberrans honoured in the heart of the city 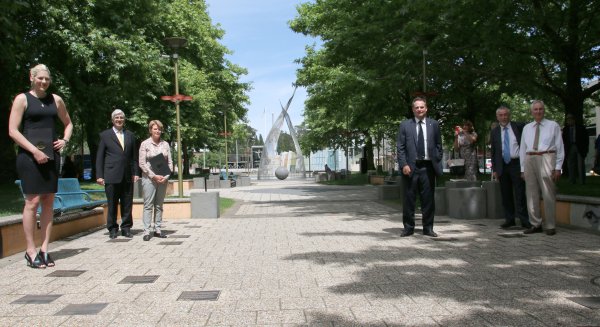 “It is a great privilege to honour eight Canberrans whose contributions to this city will be immortalised in the ACT Honour Walk,” the Chief Minister said.

“Women’s basketball legend Lauren Jackson will join the Canberra Capitals on the Honour Walk in recognition of her outstanding personal achievements in basketball and her role in promoting Canberra and inspiring young women in the national capital to be fit and active.

“Also in the sporting field, the contributions of Heather Reid to the development of football from the grassroots right up to the professional levels will be recognised. Football would not be what it is today in Canberra without the longstanding commitment of Ms Reid to our community.

“Dynamic couple Elizabeth Dawson OAM and husband Peter Dawson will be honoured for their contributions to Canberra. Liz has been a long-time advocate for the homeless and the vision impaired. She is also responsible for bringing the Common Ground project to Canberra which will come to fruition early next year. Peter has led this community in business and through his recent book ‘Creative Capital’ uncovered many of the hidden stories of talented Canberrans who have become global successes,” the Chief Minister said.

Former Chief Ministers Kate Carnell AO, Gary Humphries and Jon Stanhope AO will join Rosemary Follett AM and Trevor Kaine on the Honour Walk in recognition of their roles in shaping our city during many years of public service.

“Gary Humphries has also given much of his adult life in service of the Canberra community both in his time as member of the Legislative Assembly, which spanned 13 years, as Chief Minister of the ACT, and as Senator for the ACT. Mr Humphries established the first 24 hour mental health facility and established the Snowy Hydro SouthCare rescue helicopter service.

“The ACT’s longest serving Chief Minister, Jon Stanhope will also take his place on the ACT Honour Walk. Mr Stanhope served the ACT community from 2001-2011 as Chief Minister and was driven by his commitment to social justice, freedom from discrimination, human rights and equality of opportunity. He championed the establishment of the National Arboretum which is now taking its place as one of Canberra’s most recognisable and inspirational national attractions.

“Finally, we look back to Canberra’s early days and recognise surveyor Charles Robert Scrivener, without whom Canberra would not exist as it does today. In 1908 Charles Scrivener was chosen to determine the best city site and water catchment territory for the new capital. He was appointed the first director of Commonwealth lands and surveys in 1910 and worked closely with the Griffins in Canberra’s design.”

These eight Canberrans will join 50 other individuals and organisations already listed on the Honour Walk including Walter and Marion Griffin, Agnes Shea OAM, Peter Leonard, Jim Murphy AM, Bishop Pat Power and Heather McKay AM MBE and the Canberra Philharmonic Society.

Reading the article would give you the answer you are seeking.

Former Chief Ministers Kate Carnell AO, Gary Humphries and Jon Stanhope AO will join Rosemary Follett AM and Trevor Kaine on the Honour Walk in recognition of their roles in shaping our city during many years of public service.
I’m with you Rossco – why can’t some people read before their knees jerk them into typing?

Seems a little biased when you add 3 cheif ministers – especially Stanhope.
Why don’t we just let Katy add herself for her contribution of…um…?

I honestly don’t see why we need to add politicians to this. They hardly serve the Canberra community during their time yet get immprtalised.

Reading the article would give you the answer you are seeking.

I have to agree with you.
It would be totally incongruent to recognise Lauren Jackson (who is not really a Canberran) ahead of Follett.

Andrew Brettargh - 41 minutes ago
Multi story and solar panel the top.. pays for itself.. View
Tom Adam - 3 hours ago
Why won’t they make it multi storey, instead of stealing parklands?? Not a wise investment.... View
Steve Herczeg - 7 hours ago
I've always wondered why there's a statue to celebrate single mothers at the top of the street. View
Property 36