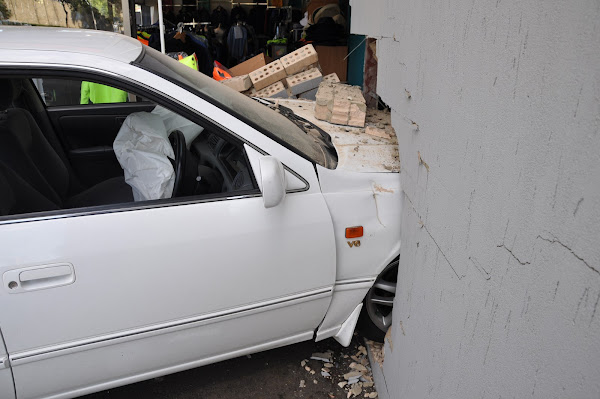 ACT Policing will summons a 20-year-old Florey man on drink-driving charges after an incident this morning in which a vehicle collided with a retail premises in Belconnen.

Police were called to the Nettlefold St address around 7.30am today (Saturday, February 9) when it was reported that a white Toyota Camry had failed to negotiate a corner and had struck a building.

The driver and passengers in the vehicle left the scene after the collision.

The driver later came to the front office of the Belconnen Police Station and made admissions. He submitted to a breath analysis and found to have a Blood Alcohol reading of 0.114. He is also a provisional licence-holder, and his licence was immediately suspended.

He will be summonsed to appear in court at a later date.

Any witnesses to the collision and who have not spoken to police are urged to contact Crime Stoppers on 1800 333 000, or via act.crimestoppers.com.au.

“how could they prove that he didn’t go home and down a few drinks before going to the cops.”

That is a seperate offence in itself. In N.S.W. it’s called ‘Willfully alter blood concentration’ and carries a maximum of 18 months. (Of course in the ACT that would translate as a severe finger wagging and a taxpayer funded taxi voucher home, but it is still on the books…)

Yep no doubt about it yet another one that’s as thick as a brick.

thicker than bricks by the looks of the photo!

If he reads this you might have given him some ideas on a defence. I mean how could they prove that he didn’t go home and down a few drinks before going to the cops.

If you knew the legislation, you’d know that’s not a defence to drink driving.

If he reads this you might have given him some ideas on a defence. I mean how could they prove that he didn’t go home and down a few drinks before going to the cops.

The white Camry. The white Commodore for the parsimonious.

JS9 - 12 minutes ago
Amen to that BJ - not just for those wanting to downsize, but those people that may actually want to have families and stay i... View
JS9 - 2 hours ago
Not saying it isn't true Nick, but is there any reasonable, valid research that has been done around housing preferences any... View
bj_ACT - 3 hours ago
How about Canberra developers start building apartments that are big enough and of a high enough quality to encourage mature... View
Opinion 32

Elroy Jones - 1 hour ago
Kate Tricks it is exactly what we need. Why do you think houses are so bloody expensive here?? Because there aren’t enough! View
JC - 2 hours ago
Attractiveness is in the eye of the beholder. I often wonder how an ugly mug like me found a good gorgeous wife, turns out th... View
54-11 - 5 hours ago
I've been to 2nd and 3rd world countries where people are living cheek by jowl, and they can design some very attractive buil... View
Opinion 22

American actor Matt Damon was happy to pose with star-struck locals while visiting the regional village of Jugiong in the...
*Results are based on activity within last 7 days

Unlicensed driver to face court after driving at police, failing to stop

@The_RiotACT @The_RiotACT
As Canberra's demand for housing continues to grow, are there too many new apartments on the horizon? One expert says no https://t.co/wOvLEBTlHx (21 minutes ago)