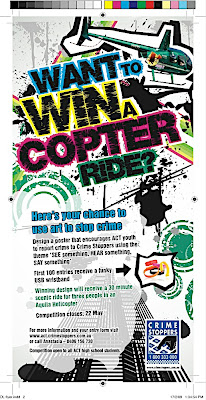 The program is encouraging young people to share information they have about criminal activity with Crime Stoppers, which will in turn bring down youth related crime.

“Crime Stoppers is an essential resource in fighting crime in the ACT, and this competition is a great way of introducing young people to Crime Stoppers from an early age,” Mr Corbell said.

“It is important for children to know that telling Crime Stoppers about illegal activity is not ‘dobbing’ on a friend or peers, rather, it is doing the right thing.”

The program calls on young people to draw on their creativity to design a poster which incorporates the theme ‘SEE something. HEAR something. SAY something.’

The first 100 entries will receive a USB wristband, while the overall winner will get a 30 minute ride in an Aquila helicopter for three people. The winning design will also feature on the back of a bus, as well as get used in Crime Stoppers promotional material.

But will anyone report the parents who actually make the posters in place of their children?

And does anyone know what a “USB wristband” is?

UPDATED: Thanks to Peterh for finding the poster which advertises the poster comp.

I can see why they’re keen for fresh blood.

But it is dobbing….isn’t it?

you can bet that the people you inform on would certainly think so, and anonymous? in the tight social communities that kids have? yeah. right.

But it is dobbing….isn’t it?

the geniuses behind ‘Be Alert, Not Alarmed’ must feel that their work has been done.

You get what you pay for.

a wristband that is joined together by a usb connection… WOW!

SP Brogues - 9 minutes ago
All that landfill View
Vickie Saunders - 12 hours ago
Not seeing a face makes one confused. Clarity pays off. View
Lorraine Marsh - 12 hours ago
Fed up seeing them all over canberra. One will do.... View
ACT Election 27

Julie Macklin - 2 hours ago
Colin Vivian, The bridge replacement was a suggestion from the Federal government, not local. Now it's not to be replaced, bu... View
Colin Vivian - 2 hours ago
Peter Mackay if they’re smart they could look at Trackless Trams at 1/5 the cost. No need for ridiculous bridge replacement... View
William Mudford - 3 hours ago
The Liberals announced the other day that they would fund their promises by encouraging people to “move back from Queanbeya... View
Property 14