Six things to do around Canberra this weekend (23–25 March) 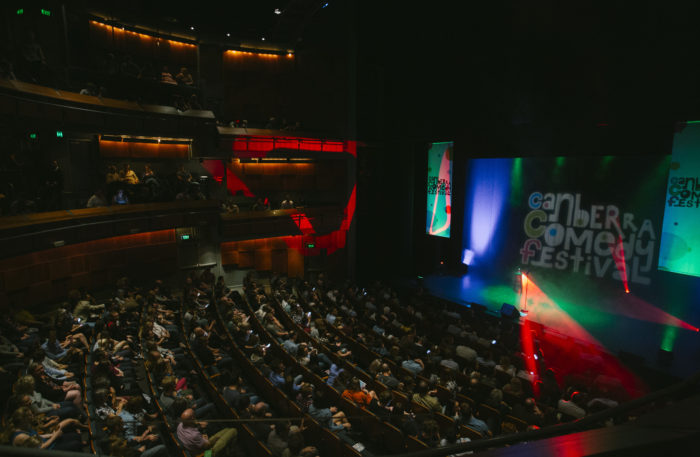 Going for a walk up Mt Ainslie, catching a movie, eating gourmet food, drinking craft beers and having a laugh: this is what every weekend should be about. The Canberra Comedy Festival is in full swing, films from the Mardi Gras Film Festival and Mountainfilm documentary film festival are being shown, and the Neverest Challenge is encouraging you to climb Mt Ainslie enough times to simulate summiting Everest! The Canberra Environment Centre is promoting local gourmet food at its Harvest Festival this Saturday, and there are no prizes for guessing what the Canberra Craft Beer and Cider Festival is promoting. Enjoy!

Where: Various venues
When: Friday, Saturday & Sunday
The Canberra Comedy Festival started on Monday night and continues until Sunday night with plenty of shows to catch this weekend. The festival is on at four locations: the Canberra Theatre, the Street Theatre, ANU and the Civic Pub. It has also taken over the square outside the Canberra Theatre—turning it into Festival Square—where there is food, drink, live music and comedy on offer from 5 pm. The Festival Club is on again in the Courtyard Studio of the Canberra Theatre. Entry is $10 or free if you have a ticket to another festival from that day, it opens at 10 pm with the comedy starting at 10:30 pm. Shows to catch this weekend include:
Friday

A special mention goes to local comedians Andrew and Danny Bensley who are playing at the Civic Pub, 9:30 pm this Friday and Saturday. And if you have kids and haven’t booked a babysitter don’t despair, the Clean Comedy Spectacular is on at the Street Theatre, 5 pm Saturday and Josh Earls is doing a show for the kids at 1 pm, Saturday and Sunday in the Courtyard Studio of the Canberra Theatre. Check here for the full program of shows.

Where: Mt Ainslie
When: Friday 6 pm – Saturday 11 pm
Run or walk enough laps of Mt Ainslie (53) to simulate climbing Mt Everest—well sort of—without having to suffer altitude sickness and frostbite and survive the death zone, of course. The Neverest Challenge is organised by and is a fundraiser for the Australian Himalayan Foundation who work with people in the remote Himalaya region to improve the long-term viability of sustainable health, education and conservation programs across that region. The challenge started in 2015 after the devastating earthquakes in Nepal and has grown to include three locations in Australia—Canberra, Melbourne and Sydney. You can do the challenge by yourself and start anytime from 6 pm on Friday or with a group of up to 20 people from 7 am on Saturday. If you enter as a team it is not a relay, the number of laps each person walks or runs counts to the team’s total. It costs $60 for a team participant, $80 if you’re doing it alone and $30 for a student. Register here.

Where: Arc Cinema, National Film and Sound Archive
When: Friday 7 pm, Saturday 6 & 8 pm and Sunday 6 pm
This weekend, the National Film and Sound Archive is showing five films from recent Queer Screen Mardi Gras Film Festival including a film restored by the NFSA—Witches, Faggots, Dykes and Poofters—which is a 1980 documentary about the very first Mardi Gras held on 24 June 1978. This film will be shown 7 pm this Friday. The other four films are:

For more information on the movies, click here. Tickets are $19 full and $17 concession, book here.

Where: Canberra Environment Centre, Acton
When: 2 – 6 pm
The Canberra Environment Centre (which is located near the National Museum of Australia) is holding its annual Harvest Festival this Saturday. Eat gourmet food prepared from locally sourced ingredients, attend sustainable living workshops, start a compost bin or worm farm, listen to live music and enjoy a drink from the Locals Bar. The Kids Fruit and Vegetable Growing Competition will be on again and there will be plenty of other activities for kids on the day. All money raised will go towards supporting kitchen gardens at community-run childcare centres in Canberra.

Where: Mercure Canberra, Braddon
When: 11 am – 6 pm
In its 11th year, the Canberra Craft Beer & Cider Festival is on this Saturday in the gardens of the Mercure Hotel in Braddon. Choose from over 200 craft beers and ciders to sample from breweries across Australia. Exhibitors will include locals Bent Spoke Brewing Co, Captial Brewing Co and Jono’s Jerky; from interstate the Sydney Brewery, Endeavour Beer, Pirate Life, Stone Dog Meadery, Akasha Brewing, Young Henrys, HopDog Beer Works, Mountain Goat Beer, Goose Island Brewery and James Squire; and cideries Nightingale Bros Alpine Cider and Willie Smith’s Cider. Tickets are $15 pre-purchase or $22 at the door, book here. All money raised will go to supporting Rise Above; a charity that provides financial assistance and support to cancer patients and their families living in Canberra, Queanbeyan and surrounds.

Where: Dendy
When: 5 – 7 pm
Mountainfilm is an annual documentary film festival held in Telluride, Colorado. And this year, for the first time, a selection of short films from the festival is coming to Canberra. The films are about adventure and issues that affect the alpine village of Telluride. They feature skiing, rafting, mountaineering, expedition travel, cultural and environmental stories. To get an idea of the films shown at the festival check out this link for films selected to tour. Tickets are $25 for adults, $20 for concession and $15 for under 19s, book here.