South Coast communities are grateful for the donated goods, but say no more now, please 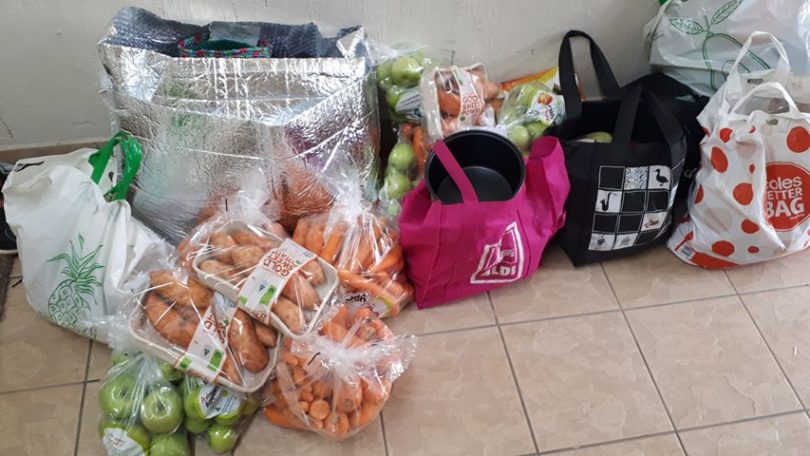 Food and non-perishable items have been received with gratitude after the fires, but the volume is now becoming hard for communities to handle. Photo: Supplied.

South Coast communities have been overwhelmed by the generosity of donations from around the country, and especially from friends and neighbours in Canberra. But while they’re grateful, they’ve asked for donations of goods to pause while they grapple with the massive amount of material.

“We continue to be blown away by the level of support coming from across the country for those impacted by the ongoing bushfire emergency – it is just incredible”, says Bega Valley Shire Council spokesman Justin Welsford.

“We have now reached a point, however, that the sheer volume of donated goods is becoming a problem.”

Mr Welsford says that stockpiles are growing rapidly, causing an issue for recovery staff on a number of fronts. There are issues around storage availability for goods, and resourcing how those goods are tracked, distributed and received.

The issue was highlighted by Bodalla resident Lisa Cornthwaite who told Region Media that the logistics of managing donations in a major disaster were huge for small communities.

“It’s not that we don’t need the supplies, we do. It’s that the deliveries need to be staggered, and we need some Government or Council personnel, professional people on the ground to help, so we can get back to dealing with our lives,” Ms Cornthwaite says.

“Currently, we are volunteering full time, around the clock.”

“We need a coordinated effort, and to find some storage. We have set up a centre here at our Community Hall, which will be needed for other activities in the future. We are working for ourselves, too. We can’t do this forever.”

Bega Valley Council has also pointed to the impact on local businesses who have been hard hit by the fires, noting that in some cases, they are unable to sell groceries such as drinks and snacks as they are available free nearby.

Vinnies and Anglicare are advising that financial donations rather than donated material goods (blankets, clothing etc) are the best way to support those affected by the devastating NSW bushfires at this point.

St Vincent de Paul Society Canberra/Goulburn CEO Barnie van Wyk says that Vinnies is doing everything they can to support people affected by the bushfires. Prior to closing local stores, they had delivered bedding, clothing and towels to local evacuation centres. Vinnies stores will also provide goods to bushfire victims free-of-charge, and Vinnies and Anglicare have said that all financial donations received in any store in the Canberra/Goulburn region will go towards bushfire victims at this time.

There are a number of other options for financial donations: Red Cross teams are on the ground supporting people at evacuation centres and recovery hubs across NSW, Victoria, Western Australia and South Australia, with funds being distributed to those who need support.

Support services include psychological first aid, information services, and practical support over the upcoming months and years it will take to recover and rebuild.

You may also choose to donate to local disaster relief funds including the Bega Valley Community Disaster Relief Fund.

Donation pledges and offers of support can be sent to emergencylogistics@begavalley.nsw.gov.au. They will be registered and linked with specific needs during the transition into the recovery phase.

You can also donate to the RFS either directly or to your local brigade.

Mechanism Of Action - 47 minutes ago
Nugget Harris as they should be View
Silentforce - 10 hours ago
Another solution would be to enforce pedestrian laws (if any in the ACT). Working in Civic, each day I witness jay-walking, c... View
Tāmati Kentwell - 10 hours ago
Hugh Gregory most income based schemes like this take into account number of dependents View
Community 43

COVID-19 clean out? Vinnies is getting ready to take your donations