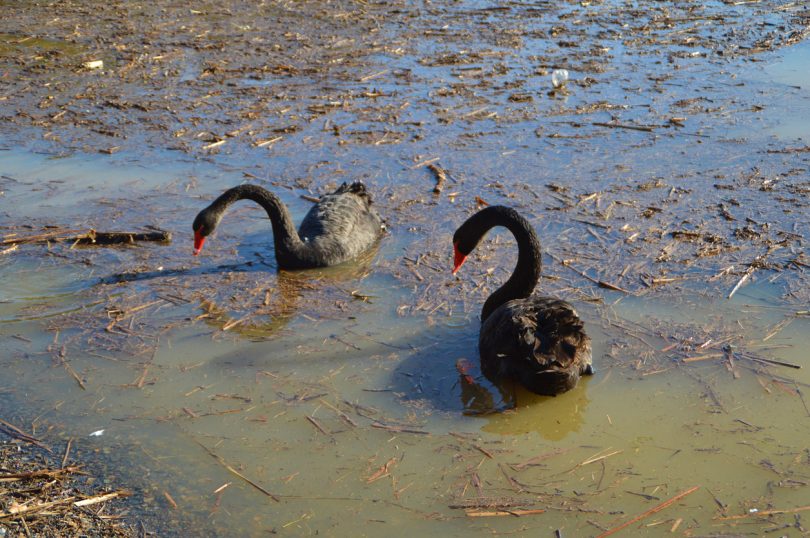 Construction has started on the biggest rain garden in the southern hemisphere in a measure to reduce the amount of harmful pollutants going into Lake Tuggeranong – known as Canberra’s worst waterway.

The new rain garden being constructed in parkland near Upper Stranger Pond will cover an area of 5,200 square metres and, when it rains, will treat about 1,800 litres of stormwater per second prior to it entering Lake Tuggeranong.

The project is one of three new ACT Healthy Waterways projects to be completed by mid-next year which will benefit Lake Tuggeranong and the Molonglo River and were announced today by Senator for the ACT, Zed Seselja, and ACT Environment Minister Mick Gentleman.

“New wetlands are also being established in Holder, between Dixon Drive and Cotter Road. The finished wetland will cover 5,600 square metres and can contain approximately 2.4 million litres of water, which is about the same as an Olympic swimming pool,” Senator Seselja said.

“Water will be diverted from existing stormwater pipes in the area to the wetlands for treatment before flowing into the Molonglo River.

“A third project, also located in Tuggeranong, will see the revegetation of part of the concrete channel to the north of Isabella Pond. Construction on this project is expected to commence in January 2018.”

Senator Seselja said that stormwater run-off is the biggest source of water pollution in Canberra’s creeks and lakes – posing a risk to public health and aquatic life.

He said that the Federal Government is contributing up to $76 million for the construction of key water infrastructure projects to improve long-term water quality in the ACT.

Water quality has been a big issue for many years in Lake Tuggeranong, with the catchment identified as a priority when planning for ACT Healthy Waterways first began.

Work is scheduled to be finished by November 2018 on two new wetlands at Isabella Pond, with this project including the widening of the weir.

“The ACT Government knows the Tuggeranong community is concerned about water quality and these three projects all focus on limiting the amount of pollutants entering the lake,” Mr Gentleman said.

“Three more projects for the Lake Tuggeranong catchment are likely to be confirmed in coming months, along with an in-lake research project that will improve our understanding of pollutant sources driving blue-green algae. This follows on from a carp removal program conducted earlier in the year.

“Research is ongoing into ways to better manage this introduced pest species. Almost four tonnes of carp were removed from Upper Stranger and Isabella Ponds when they were drained ahead of construction earlier this year,” Mr Gentleman said.

“The data collected will add to our knowledge of carp numbers and has been shared with the National Carp Control Plan.”

ACT Healthy Waterways is a $93.5 million joint initiative of the ACT and Federal Governments to improve the quality of water entering the waterways and flowing downstream into the Murrumbidgee River system.

“The management of water is a long-term issue and we all have a part to play,” Mr Gentleman said.

“The drains outside your home go straight to the stormwater system so don’t pour paint and other chemicals into them and make sure you rake up your grass and lawn clippings.”