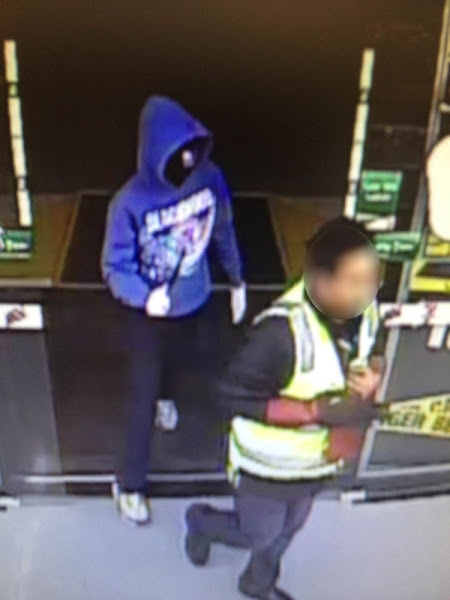 ACT Policing is seeking witnesses following the armed robbery of the 7-Eleven service station in Spence early this morning (Friday May, 10).

Around 2.10am, a man armed with a knife approached the console operator of the 7-Eleven service station who was outside at the time.

The offender walked the operator into the service station where he ordered the victim to open the security door behind the counter.

The offender removed several packets of cigarettes before taking a small amount of cash. The offender then ran from the scene in an unknown direction.

Anyone who was in the area of service station and who may be able to assist with the investigation is urged to contact Crime Stoppers on 1800 333 000, or via www.act.crimestoppers.com.au. Information can be provided anonymously.

Maybe, though sometimes they do have minor issue with the pumps, with the button thing that tells it whether it’s being used or not.

Hell, if the setup isn’t a particularly good one it’s possible the attendant was going to the loo.

I often wonder wtf when I see servos that the staff has to leave their cage to use the toilet.

Re the pumps, I have been asked before to go back out and re set the nozzle.

That wouldn’t happen if cigarettes were legal….

Main reason crims steal cigarettes is because they’re one of the few goods around now that actually have some kind of resale value. (since all their deadshit mates no doubt smoke)

Maybe, though sometimes they do have minor issue with the pumps, with the button thing that tells it whether it’s being used or not.

Hell, if the setup isn’t a particularly good one it’s possible the attendant was going to the loo.

That wouldn’t happen if cigarettes were legal….

Jesus Christ. Threatening a man with a blade (ie potential injury or death) for the sake of a few packets of durries and small amount of cash.

There are some mongrels in this town.

Is that Death in a purple hoody?!

Where’s Dogman when you need him?

Danny O'Donnell - 2 hours ago
Lynda Bailey Daniel would have that tucked away 💵💵😜... View
Opinion 19

A_Cog - 6 hours ago
The ACT Labor Government's terrible performance running core services like Health is what SHOULD matter in elections, but in... View
Best of Canberra 29

Juanita Caddy - 7 hours ago
Had a great experience recently with Kyle Dedini. I had a few problems with my left foot, and after months of pain and confus... View
Lifestyle 1

Jacky Fogerty - 7 hours ago
Thank you so much Larissa for a wonderful article! As well as providing a precious record of our local flora and fauna and he... View
ACT Election 5

maxblues - 7 hours ago
South Australia recently banned the use of political corflutes for future elections., not just because of the visual pollutio... View
I am a Rabbit™ - 9 hours ago
The Greens classify as a minor party but don't seem to believe that spreading the equivalent of spam everywhere is a fair res... View
steve2020 - 17 hours ago
The problem I find with corflutes and other political advertising is that it can be a bit overboard, with the same signs over... View
News 5

Darron Marks - 8 hours ago
Public service super has been a time bomb for many international governments. I will give the Liberal party this they did set... View
tfx1 - 21 hours ago
A now bankrupt Australian economy and therefore the tax collecting Australian government is being asked to pay additional mon... View
Property 2

ny4231 - 9 hours ago
This proposed apartment is built right to the edge of the block and is not set back at all. It is not difficult to find a pla... View
Sport 1

Stephen Saunders - 10 hours ago
What I thought. Somebody send him a soft-toy koala. View
ACT Election 2

Nudist - 11 hours ago
L an excellent summation of the current state of play in the Gungarlin electorate. I’ve had involvement with Peter on at le... View
Fiona Carrick - 18 hours ago
Hi Peter We are singing from the same song sheet. It is time the Government looked after our Town Centres! The Woden Town Cen... View
Community 8

Bill Gemmell - 20 hours ago
Jayne Bobby isn't it going to be a burn out pit? View
show more show less
*Results are based on activity within last 7 days

@The_RiotACT @The_RiotACT
The Woden Town Centre after hours can be a lonely place but all that is about to change https://t.co/Fp5jeIgoHE (2 hours ago)

@The_RiotACT @The_RiotACT
Boorowa’s Charlie Arnott is back with a second series of podcasts featuring fascinating insights into holistic regenerative farming https://t.co/Y3LOTCAzP9 (3 hours ago)

@The_RiotACT @The_RiotACT
Charlie and Julia are more than the new custodians of Yass's Globe Inn - they're bringing new life to the 173-year-old landmark with olive oil, vinegars and raft of fresh ideas https://t.co/IgXmpYuug0 (4 hours ago)