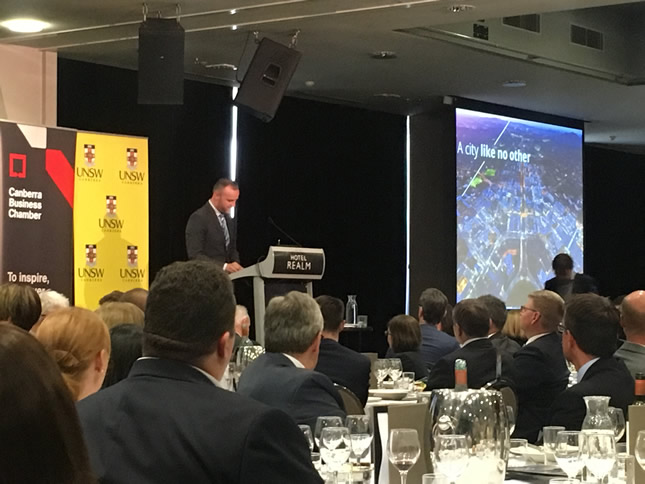 ACT Chief Minister Andrew Barr has used his State of the Territory address this afternoon to announce a funding commitment of $200,000 for the Canberra Business Council to help boost Canberra’s exports.

While the ACT was mostly a service economy, the Chief Minister said our top shelf wines (the ACT pioneered shiraz viognier blends) and high-tech goods were proving popular in south-east Asia.

The Chief Minister used an array of statistics to play up the strengths of the ACT economy during the annual address to the Canberra Business Chamber at Hotel Realm today.

“Jobs growth is double the national average and unemployment among the lowest in the country,” Mr Barr said.

“The ACT’s service exports grew by 13 percent in 2016 and Gross State Product grew by 3.4 percent.

“We remain focused on jobs that will deliver more growth and wages for Canberrans.”

Mr Barr delivered his sales pitch to the titans of Canberra business as they enjoyed a formal lunch with wine.

“I’ve always believed our city’s reputation as a sleepy country town never did justice to this place,” he said.

“I’m pleased more and more people are recognising what’s on offer in our cool little capital.”

His address made a special mention of the ACT’s top universities — the ANU and UC — for their role in giving Canberra its “comparative advantage” in education. The ANU was the largest employer in the territory and responsible for much of the interstate and international migration to Canberra, he said.

“By 2020 I want Canberra to have further developed its strengths as a centre for high-quality research institutions.”

“Up until recently we had rented [Canberra Stadium] for the princely sum of $1 a year,” the Chief Minister said.

But as the Sports Commission, the arm of the Federal Government that owns the Canberra Stadium, was a bit “cash strapped” they had decided to dramatically increase the annual rental to hundreds of thousands of dollars.

“My view is that if we are to improve the Canberra Stadium then the Federal Government needs to take greater responsibility for the asset that they own,” Mr Barr said.

He also said the ACT Government’s balance sheet had been hamstrung as a result of Mr Fluffy.

“Mr Fluffy houses have left us with $300 million in liabilities,” the Chief Minister said.

“As the result of taking on a $1 billion loan to deal with Mr Fluffy we have had to put on hold some of our larger infrastructure projects.”

In his closing notes, the Minister paid homage to Canberra’s powerful property developers, whose work he complimented and encouraged despite having banned their political donations during the 2016 election.

“That’s my call to the development industry.

“This is a once in a lifetime opportunity to rejuvenate the gateway to the capital of the best country in the world.”

Chris Hobbs - 4 hours ago
Time will tell. If they are pragmatic and able to adapt their ideologies to actual plans and policies, it will be an interest... View
David Brown - 6 hours ago
They got disaffected votes from people fed up with both majors. If the Libs can find a moderate leader and develop some sensi... View
HiddenDragon - 6 hours ago
Most of what we've seen from the ACT Greens in the last few terms of government has been fairly standard stuff from the polic... View
Property 37

Capital Retro - 4 hours ago
One comment on this thread was the Australian Electric Vehicle Associate has given advice to the ACT govt. on its policy that... View
Heavs - 7 hours ago
Five superfluous words in that last sentence. View
JC - 8 hours ago
What policy? Always trying to make a political point. What’s clear is you don’t know much about electronics and electrica... View
News 1

russianafroman - 7 hours ago
Terribly underfunded. Around Gungahlin it's hip height. There should be double or triple the amount of mowers. It's not justi... View
News 32

Michael Hourigan - 15 hours ago
Except that it doesn't Joe View
Lloyd Woodward - 1 day ago
Stop with this boomer thing. Im apparently a Boomer, but think this is a great idea. He is just a sad Panda.... View
News 1

awc73 - 16 hours ago
Imagine if the ACT government could provide 24/7 public access AEDs to all residents and visitors. No need to bang on the doo... View
Property 8

Nick Sifniotis - 17 hours ago
I want this View
News 15

Court Watts - 19 hours ago
Sally Barton Hopefully come March there won’t be any restrictions View
Sally Barton - 20 hours ago
Court Watts - this is good news 😊 View
Nicole Lawler Inveen - 1 day ago
Grace Byrne what a difficult time for you and your family. I hope your little girl gets to meet her baby brother, and that yo... View
Sport 9

Michael Weaver - 20 hours ago
Ack was my go-to for anything in Moruya as a sports journo. Fitting tribute for a great bloke! View
News 10

@The_RiotACT @The_RiotACT
Miss the music: the @CBR_Symphony will be back in 2021 with a new team, old favourites and fresh Australian works. Check out the program https://t.co/rdarOqWtAd (5 hours ago)

@The_RiotACT @The_RiotACT
Art deco elegance and century-old charm are back in Kingston with the opening of Queenies Bar and Good Times https://t.co/svCAn3flWd (6 hours ago)

@The_RiotACT @The_RiotACT
The Oaks in Woden is the ideal property precinct for Canberrans to use the Federal Government's HomeBuilder grant to their advantage https://t.co/70jE9wSTeR (7 hours ago)