Steep learning curves for many in expanded Assembly 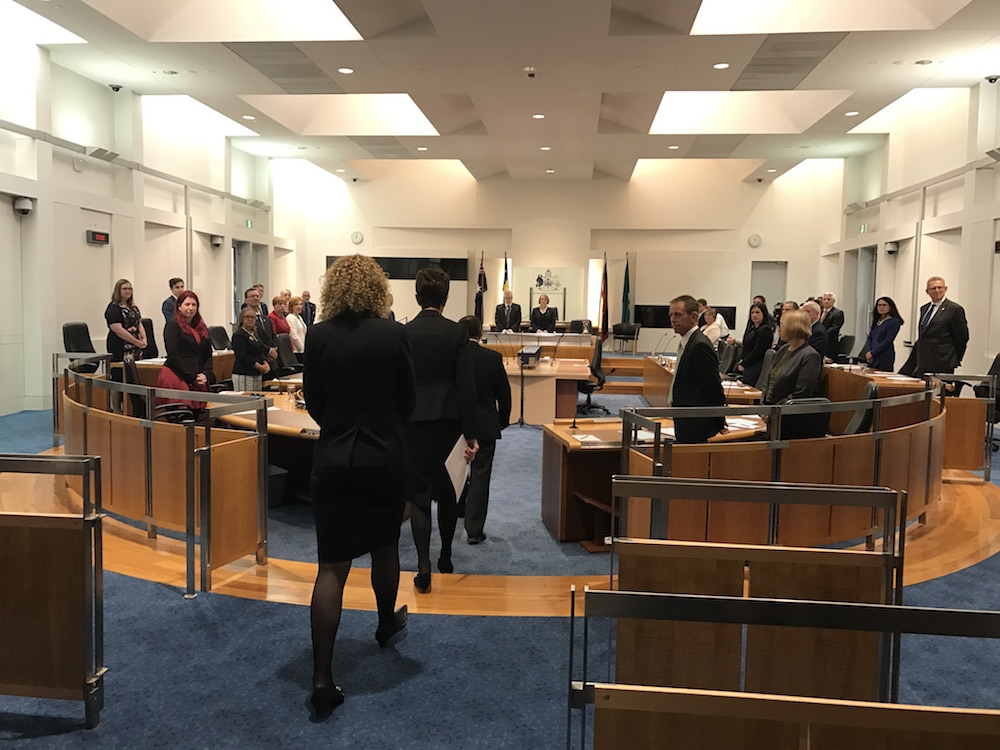 The ACT election has changed the Legislative Assembly, both physically and, of course, numerically.

To accommodate the offices for the increase of eight members from 17 to 25, much of the legislature’s administration moved from South Building across Civic Square to North Building. This includes the Assembly library, effectively clearing out an entire wing of the second floor. Party and media rooms also have been removed and first floor space beside the reception area has been converted to two committee rooms.

The Chamber, originally designed to accommodate additional members from the original 17, still has vacant desks in the crossbench area with the major Parties comfortably seated opposite each other below the Speaker’s chair.

The whole building is a credit to those responsible for the redesign given the obvious space constraints they faced.

The increased Assembly membership, as predicted, has brought advantage to the governance of Canberra with more MLAs to share the ministries and the committee workload.

There have been a few add-ons to existing portfolios within the Ministry, which often do not add much, and a new portfolio Climate Change, the responsibility of Shane Rattenbury, who has re-joined Cabinet. With Joy Burch as Speaker, Labor has four backbenchers on committee work, hopefully ensuring more detailed attention to this important role which often is not as diligently pursued due to lack of time and too many committees.

The Liberals on the other hand have opted to give all 11 members shadow ministry roles, but again the increase in Assembly numbers will make committee work less personally demanding.

The situation of the Greens with one backbencher is interesting. Will Caroline Le Couteur will try to cover all committee work – a formidable task – or, of more importance, will her relationship with Minister Rattenbury and the Party membership poses a challenge? In the previous government Mr Rattenbury was in dispute with his Party over the kangaroo cull. This time around with another Greens MLA will such issues be easily resolved?

The matching of ministers and their opposition shadows has produced some questions, where sitting and therefore experienced members are matched against novice first-time MLAs.

Former Opposition Leader Jeremy Hanson is an experienced Shadow Attorney-General and Shadow Minister for Veterans Affairs while Labor’s Gordon Ramsay has picked up the portfolios as a new MLA. Ex-Speaker Vicki Dunne and Mr Ramsay face off in the arts portfolio while Libs stalwart Steve Doszpot and Mr Ramsay are their parties’ respective spokesmen on seniors.

Deputy Chief Minister Yvette Berry is up against Liberals newcomers James Milligan in Sport and Mark Parton in Housing, while Labor’s Mick Gentleman faces another debutante, Elizabeth Lee, in Environment.

It will be a steep learning curve for many. The Chief Minister conceded he doesn’t expect instant experts from his ministers in all policy areas for which they have responsibility, however departmental support and, in opposition, diligent study should see most through.

Further, although this observation might be premature, the ACT Assembly finally appears to be settling down to a three Party maximum representation after 27 years.

Pictured above, MLAs-elect watch as ACT Chief Justice Helen Murrell arrives in the Legislative Assembly Chamber for their swearing in. Photo: Charlotte Harper

Robbie Munday - 5 hours ago
Inadvertently result in budget cuts more like. View
Christopher Cuba Rabanal - 6 hours ago
Further explanation needed. Because I believe in decriminalisation for users and addicts. But hard prison sentences for deale... View
MERC600 - 13 hours ago
Well I guess if there won't be any concern of this leniency, and there will be no unwanted effects, we should see the same ap... View
News 1

HiddenDragon - 8 hours ago
Much of the progressive agenda being pursued by the ACT government is fairly standard stuff - not just the ideas, but the arg... View
Ray Polglaze - 16 hours ago
Martyn Tweedie, And so what would your view be of the Federal Labor Party in December 1968? What would the evidence show? By... View
Martyn Tweedie - 16 hours ago
Ray Polglaze my sincerest apologies. "Re-elected" then. View
Food & Wine 19