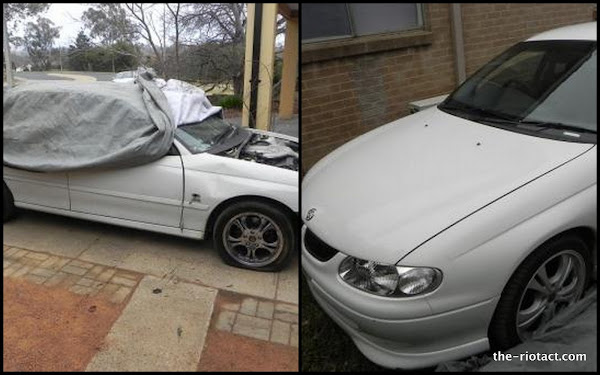 About 9.30am this morning police executed the search warrant at a home in Weston.

Two cars were located which had been stolen recently from car yards in the ACT. A number of other items were also seized.

Police expect to charge a 20-year-old Conder man who drove a stolen car into a police vehicle on Wednesday night (July 10) with these additional offences.

The man attended the ACT Magistrates Court on Thursday morning charged with Ride/Drive Motor Vehicle without Consent. The man was remanded and will reappear at court on July 26.

Gregg Heldon - 44 minutes ago
Margaret Dudley I hope not but...... View
Stuart McKay - 1 hour ago
Ian Bushnell has thrown the toys out of the cot again, sigh Brad Clarke View
Joseph Stubbs - 1 hour ago
Here's a look at what you get when you go to ACT Labors 2020 Election Policies page. Though, to be fair, elsewhere on their s... View
Property 46

Allan AJ - 1 hour ago
Scott Lang you should of knuckled down early on and bought in your 20’s not try to start doing it in your 40’s. View
Jp Romano - 2 hours ago
Margaret Welsh you’re wrong. Shadow me your facts. View
Scott Lang - 4 hours ago
Allan AJ , perhaps you are right. But I'd be looking for something at half that price. Unlike the older generation, I have to... View
Opinion 19

Phạm Quới-Chi - 14 hours ago
We spotted not just one , but three black cockatoos in Isabella Plains 😍 View
David Ironside - 17 hours ago
Tracey Ironside yes there a few around Fadden recently View
Sandy Gibbs - 17 hours ago
Kathy Little Suzy Obsivac these are the ones we saw on our walk today. Timely article!... View
Opinion 1

Jeremy Calero - 21 hours ago
Kaitlyn nothing will stop it lol View
O L - 23 hours ago
Wonder what that means for rental longer term? Probably go up after covid to match increase in housing values View
Community 12

O L - 23 hours ago
HECS gets paid only when you earn enough money to pay it back. What’s the problem with that? Fair system and I had no issue... View
News 6

O L - 23 hours ago
Great, that means little to no federal funding coming our way View
Annie Mills - 23 hours ago
Ben Winkler I have a sneaking suspicion that people in the bushfire affected areas are so desperate for the help they have be... View
show more show less
*Results are based on activity within last 7 days

@The_RiotACT @The_RiotACT
Work at Canberra Hospital? Canberra Health Services has lodged plans for a temporary 1100 space staff car park on the site of the former Woden CIT to service the hospital while it undergoes major infrastructure works over the next four years https://t.co/a1xcG1rZsO (36 minutes ago)