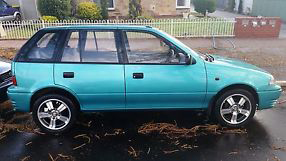 A Suzuki Swift hatchback similar to the one which was driven dangerously. Photo: Supplied by ACT Policing.

Police are seeking public help in investigating a dangerous driving incident in Fraser on Wednesday morning in which a Suzuki Swift narrowly missed hitting two motorcycles.

ACT Policing reports that at about 8.30 am on Wednesday (December 27) a green-coloured Suzuki Swift similar to the car shown in the photo above was seen driving dangerously in Fraser.

The Suzuki Swift continued along Kuringa Drive and then near the intersection with Kingsford Smith Drive, it made a sharp turn onto the dirt verge of the road to overtake two black, cruiser-style motorcycles. When the car moved back onto Kuringa Drive, it narrowly missed hitting the motorcycles.

The Suzuki Swift then crossed onto the wrong side of the road to overtake another vehicle in front of the two motorcycles.

The Suzuki Swift is an early model hatchback and has ACT registration plates.

Police are asking for assistance from the drivers of any vehicles involved in this incident. They would also like to hear from any drivers who may have dash-cam footage from the driving incident, as well as any other witnesses. If you can help please call 131444 and provide contact details for follow up by investigators.

Alternatively, anyone who has information about the incident or the vehicle that could assist police is asked to contact Crime Stoppers on 1800 333 000, or via the Crime Stoppers ACT website. Information can be provided anonymously but please quote reference 6215402.