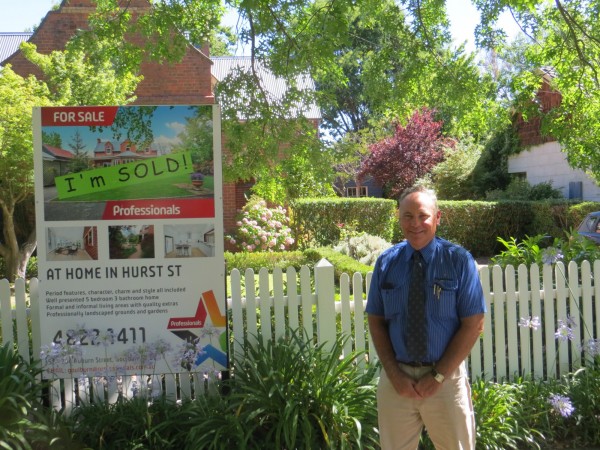 Demographia’s 13th annual International Affordability Study found Sydney the second least affordable city in the world, prompting Deputy Prime Minister Barnaby Joyce to suggest leaving the capital and buying in the bush. Investors and live-in buyers are well down that path in Goulburn.

Canberrans are drawn to Goulburn where they buy a new, four-bedroom home with two bathrooms on a large block for $450,000, rather than $650,000 for an equivalent property in the ACT, Allan McDonald says.

Mr McDonald, real estate principal of the Professionals Goulburn, says by far the biggest driver of the local market are Sydney investors, awash with spare equity in their homes.

Homes for $300,000 to $450,000 lure them from Australia’s most expensive market, and in Goulburn their investment has a good likelihood of tenants from a jobs market based on the jail, abattoirs, NSW Police Academy, and buoyant livestock and markets.

“Farmers have had probably three years now of exceptional cattle prices, and good seasons. The lamb market and wool market have been strong,’’ Mr McDonald said.

“That helps a town like Goulburn, because you have your farmers coming in, they buy new cars, they probably put a new kitchen in, renovate and put a new bathroom in and that gets the tradies operating. At the moment the tradies are flat out, particularly your builders.’’

Farm machinery dealer Andrew White says Sydney’s rural buyers are after lifestyle blocks these days, and he has also sold machinery to Chinese investors too, who buy land to help secure Australian citizenship.

Mr White says Canberrans are even keener rural buyers. The Goulburn dealer has sold equipment to hundreds of lifestyle farmers at Wambion east of the national capital, and are becoming more active beyond Gunning to Dalton and Crookwell.

“If every farm machinery business was within 80 kilometres of a capital city they would all be cranking along nicely,’’ Mr White said.

Mr McDonald says Sydney investors are typically couples in their 50s, who have paid off their home which they had bought 25 years ago for $250,000. Today the home is worth about $1.5 million.

Property information specialist CoreLogic says Goulburn’s median house prices rose 7.69 per cent in 2016. The demand-to-supply (DSR) rating for investment is good, i.e. demand is ahead of supply but not alarmingly.

Mr McDonald said competition for investment properties in 2016 created a backlog of buyers, particularly for homes under $400,000.

“Those places generally are not even hitting the market, they are getting sold before they are advertised.’’

The rural market was slowing for places further out from Goulburn, but he expects the residential market to power ahead in 2017, as it did in 2016.

“That was pushed pretty strongly on the basis your Sydney market was a capital gains market, it wasn’t an investment market in the sense of return on investment. Our Sydney markets were running about 3 per cent maximum on a rental return whereas Goulburn was running on about 5 per cent.

Compared to what you can get for bank interest we are probably 2.5 per cent above it.’’

“Your return is smaller (in Sydney), your start-up costs so much higher. The benefit of Sydney is the capital gain factor, but capital gain in Goulburn has been strong as well,’’ he said.