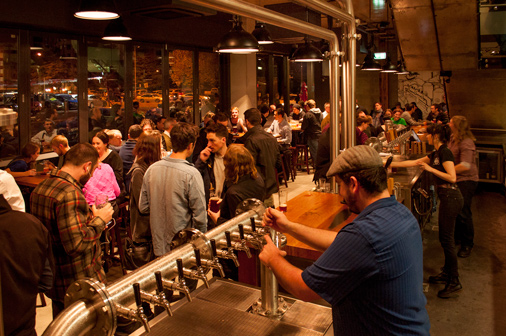 It has been the talk ‘of the town’ for a few weeks, so what better way to the start of a long weekend by checking out the Bent Spoke Brewery. Master brewer, Richard Watkins and partner Tracy Margrain (both formerly of Wig and Pen) have hit the ground running with their brewpub in Braddon.

On Friday night, after and short line-up to get in (to be expected on opening night) I was happy to see the industrial style decor did not overpower the venue and was blended perfectly with raw timber inclusions, such as the beer taps (room for up to 18 tap in the future). The high ceilings, abundance of glass and large silver vats provide a striking and unique feel to the pub that feels understated and not at all ‘over the top.’ 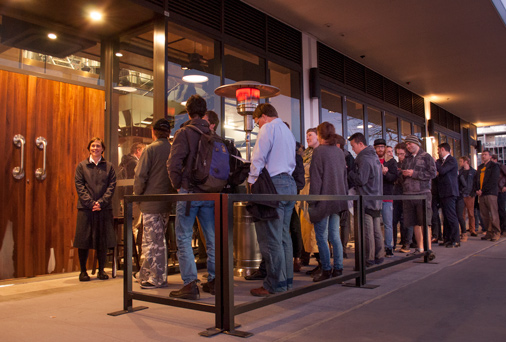 Not being a beer or cider drinker myself I questioned whether I would bother checking out the Bent Spoke, however I am glad that I did because although the venue is a ‘beer-lovers paradise,’ I was pleasantly surprised to see that there is a selection of wine available and was even happier when I noticed that it had been sourced locally. It appears Watkins and Margrain have catered for a wide variety of people in their planning.

If online reviews from the weekends’ trade are anything to go by the venue will continue to draw crowds, however, the one criticism that appears to have been discussed online is the disappointment of the food and portion verses price. Being the opening weekend perhaps there were a few teething problems in the kitchen, however I’m sure it will be a matter of ‘watch this space.’ 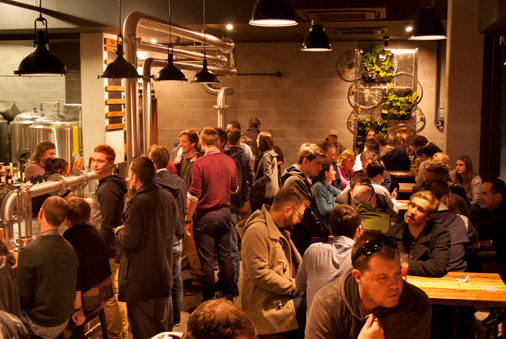 Overall, what a relief to see a Canberra venue that does not look and feel the same as other bars/pubs in Canberra, which are all starting to look very much alike! Watkins and Margrain have definitely found a niche in Canberra and it is not difficult to see why Canberra’s newest ‘hot spot’ has been received so well in its’ first few days.

Wendy Young - 59 minutes ago
Birds are much more important than delivery drones. So. Much. More View
Brittany Pryor - 2 hours ago
Michaela Gillard this is the drone delivery I was telling you about! View
Capital Retro - 9 hours ago
Now for the wind turbines. View
Opinion 37

Louise Earl - 8 hours ago
I love Canberra … but yes.. Canberra has missed the boat on a lot over a lot of years! Not just AFL. View
Matt Bacher - 12 hours ago
Michael Bourke …..as you and I can attest to mate 🤣 View
News 156

Brett Wheeler - 8 hours ago
Leon Arundell but I was more relaxed in a train. I was also able to move more freely, which counts, on journeys over a few ho... View
Brian Kilgannon - 12 hours ago
Frances I think you answered the question. No one uses it so why build it when we have more pressing issues at the moment. It... View
Oan Nbn - 12 hours ago
Leon Arundell but I guess Canberra to Yass need to connected from Kingston without passing CBD and making Light Rail stop as... View
Community 21

Peter Hyde - 9 hours ago
Greg Myat they are for sampling the potable water supply. The samples are the taken to a laboratory and checked for quality a... View
News 6

Capital Retro - 9 hours ago
Where does CBR get its income from? View
chewy14 - 12 hours ago
JC, There's 4 comments, who's this mythical blue glasses brigade whatever that's supposed to mean? And I can't see where anyo... View
News 83

Pat Gagel - 11 hours ago
Maybe not. I have regularly used the service since 1992. Love it. Still the most sophisticated form of travel. Much better th... View
Marco Spaccavento - 11 hours ago
Pat Gagel I’m not a user. 3 a day also hardly justifies a new station… View
Pat Gagel - 11 hours ago
David Malcolm they aren’t a problem. Believe it or not, biggest issue is a grade crossing on a bend between Bungendore and... View
Property 22

Anthony Willing - 11 hours ago
Paul Mills the same as every old / wheelchair person in every multi-storey in every city in the world.The fire brigade have s... View
Anthony Briscoe - 12 hours ago
Canberra more and more of this type of development will happen under the Barr Government. Just wait till the tram goes to Wod... View
Paul Mills - 12 hours ago
Becoming a common Canberra vista. View
News 128

assiduous - 12 hours ago
All voters should look closely at the actions of Federal Liberals prior to and post the royal commission into banking and fin... View
show more show less
*Results are based on activity within last 7 days

@The_RiotACT @The_RiotACT
With its cathedral ceilings, central fire place, charming timber trimmings and vast rural views - not to mention a breathtaking pool - 107 Bingley Way in Wamboin makes up not just one, but two beautiful homes https://t.co/bDgOmDt7Tl (25 minutes ago)

@The_RiotACT @The_RiotACT
The challenge is on - teams from F45 in #Queanbeyan and #Ngunnawal are out to win bragging rights in a burpee competition to raise money for the @DVCSACT https://t.co/OQqAuSxZAh (10 hours ago)