The Dinner Party at Dendy 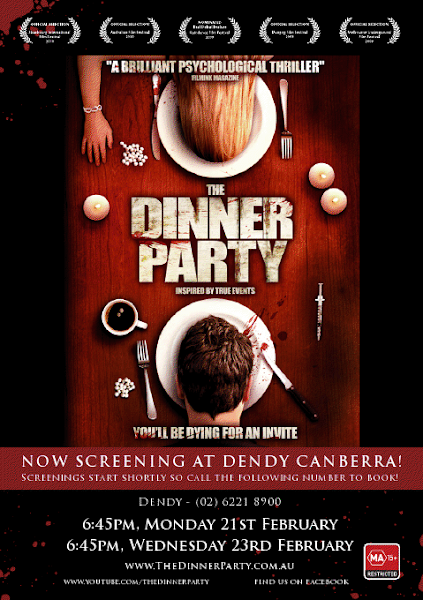 Brendan Sloane has sent the following email through which I think will be helpful:

Due to increasing demand for people to see this film on the big screen, THE DINNER PARTY will start screening at Dendy Canberra starting on Monday the 21 February (See attached flyer). A big thanks to Kathryn Craig and Sean at Dendy who have made these screenings possible by shifting times to accommodate us in ‘Oscar Season’…… God help us!

Please call the following number to ensure a seat:

Given we have been slotted into programming so quickly, calling is the only way to book. Thanks again to the team at NFSA – you can pass future calls onto Dendy now!

For those not in the know this is a locally made feature film based losely on local events. (the death of Joe Cinque at the hands of Anu Singh)

The Dinner Party will be screened again on Monday 28 February 6.45 pm. Go see it!

It’s great to see a film set in Canberra – beautifully shot and very Inner North, with the locations juxtaposing student-guvvie-grunge and a glabrous middle-market bland setting for poor “Joel” and “Angela King(h)” . I spotted the former Front co-owner among the extras.

Great to hear Fire on the Hill and other Canberra bands as the soundtrack.

My only beef with the film was that the lead actress overacted throughout – but while that detracted from the experience it didn’t wreck it for me.

(I’m still confronted that those 1997 dinner party guests are practising law in Australia and were never named).

I saw the dinner party at Dendy last night and really enjoyed it. Magnet-mart-man said a few words before the film and also mentioned that because the screenings were a near sell out, Dendy will have more screenings after this week. So go see it if you get a chance.

Most of the film is shot inside a townhouse but there are a few scenes out and about with the front cafe, the junkie flats, Braddon’s big yellow bus, and (I think) Glebe park which I got a bit of a thrill from seeing on a big screen. The eerie music was a great choice to suck you into the building suspense and the last 40 minutes or so were emotionally charged and, I found, quite intense (esp the OD-ing scenes) . Lara Cox did an excellent job of portraying the character ‘Angela’ (Anu) and was mesmerising to watch.

And always in the back of my mind was the thought that these events happened right here in Canberra.

Something I’m not sure fits well is the promotional poster that was chosen for the advertising. My fellow movie goer went into the film thinking it was to be a comedy or a piss take of the story based on the poster, don’t be fooled, it wasn’t.
Highly recommended viewing.

All reports are this film is great, Congrats to Brendan on getting a local made one up on the big screen!

I phoned (Sunday 5 pm) to book & pay – Dendy manager on duty knew nothing about it. Said to phone back on Tuesday …

Dani Hache - 1 hour ago
Whilst this is 100% accurate, it cannot be fixed with the government failing to invest in an APS workforce. These businesses... View
Bill Bloxham - 2 hours ago
Been going on since Adam was a boy View
David W Jones - 5 hours ago
Just look at the number of contractors that just keep getting extensions or renewals with no questions asked! View
News 161

Jimbo Lambert - 3 hours ago
Areas in Gungahlin haven't been mowed for at least 6 months! How hard is it to use our high rates money to employ some more m... View
Jimbo Lambert - 3 hours ago
Randy Goldberg you mean 6 months later? You must live in a more affluent area than Gungahlin, as it seems we have been alloca... View
Frank Arnold - 5 hours ago
Ohhh myyy Goddd !...Crooked pavements!...pot holes in our roads!...and now it's long grass !!!! FFS we hardly had any 3/4 yea... View
News 4

Winkie Wee - 4 hours ago
I'm lucky in that I live within a short walk to either the R4 or R5 buses. I use the bus quite a bit unless both of us need t... View
kenbehrens - 6 hours ago
Mr Parton is right. If Dr Paterson is concerned about why women, (but let's just say people) don't leave the car at home and... View
bj_ACT - 12 hours ago
Removing over 700 bus stops across the city and making women have to walk much further to their bus stop is one obvious issue... View
Community 6

liberalsocialist - 5 hours ago
What a disgrace. And while in no way taking away from this cowardly act, I have come from NSW where we are told to dismount a... View
News 13

kenbehrens - 5 hours ago
That makes no sense. Your comparisons are 20-25 years apart. The "new" bus route takes longer because it services a bigger ar... View
bj_ACT - 6 hours ago
Not sure about the adding 10 minutes to the 333 journey by changing to go past College St and UC. The change Only added 1.2km... View
michael quirk - 10 hours ago
Yes,but it is by no means certain that light rail stimulates urban redevelopment more than BRT. Much depends on design of the... View
News 1

rocca66 - 9 hours ago
I was staggered to think there could be 30,000 public service compensation claims. View
News 15

Brigid Whitbread - 13 hours ago
Peggy Sue I would love to talk to you about your certificate. If you had a moment to call me at Queanbeyan Library I would be... View
show more show less
*Results are based on activity within last 7 days

@the_riotact @The_RiotACT
The @MoAD_Canberra has given the Speaker’s Suite at Old #Parliament House a makeover, taking the décor and setup back to when it was occupied by Australia's first #female Speaker, Joan Child https://t.co/q2jV4nSVAz (1 hour ago)

@the_riotact @The_RiotACT
Hot in the City: You knead a box of The Bite CBR’s pretzels in your life! https://t.co/6b3M1kuAyH (2 hours ago)