The first flight of The North Belconnen Knife Fighting Pits 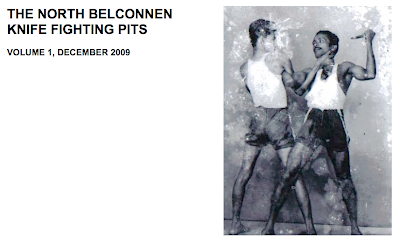 A collaboration of two of Canberra’s promising young writers the first volume of The North Belconnen Knife Fighting Pits has arrived.

North Belconnen has an active and strong freeform martial arts, cage fighting and knife fighting scene. Throughout the 80s and 90s, a lot of great fighters and fight events were run in basements, backyards and carparks. Then in 2002, local hero Hadley (aka The Human Cannonball Academy) and former Shotokan black-belt turned switchblade champion David Finig (aka blind) joined forces to set up the North Belconnen Knife Fighting Pits, a home for knife fighting in Canberra.

The NBKFP has seen a lot of great fighters and artists come through its doors since its inception: interstate and international knife-stars, plus a lot of great home-grown fighters. And of course, our loyal grass-roots following of fight-fans and supporters who keep the whole organisation rolling.

Now, at the end of a great year for knife fighting in Australia, the North Belconnen Knife Fighting Pits is celebrating by releasing four publications from its last few years of life. These four publications look back on and celebrate some great years of fighting: some highs, some lows, some triumphs, some disasters, and a lot of great blood shed on our faithful wooden floor!

So hold on to your hats, keep your guard up, and get ready for four exciting issues of the North Belconnen Knife Fighting Pits!

Scott Bell - 2 hours ago
Ya all Dreaming tax man rules who gonna pay for the Friday’s View
Karen Feng - 6 hours ago
4-day work week. Those that meant 3 of those days are double pay. or does it meant we are paid one day less View
Bianca Rossetti - 6 hours ago
I prefer more flexibility options rather than stating 4 days working.. nsw are looking into school hours changing, maybe this... View
News 8