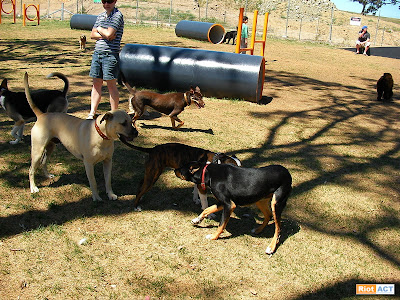 Having ventured to darkest Gungahlin this afternoon we thought we might as well do something useful. So we took George (The Kelpie Of Few Accomplishments) to the Forde Dog Park to see what it had to offer.

As I previously mentioned on the subject of dog parks; all a dog really wants is green grass to run on and the owners don’t ask for much more than somewhere to sit and a bin for the disposal of dog muck.

And to be honest despite all the thoughtful equipment built for the dogs, the ability to run around is where it’s at for them.

Owners would occasionally make desultory efforts to get the dogs to do something clever, and the dogs would sometimes oblige.

The best thing about the place is the paired gates to enter which should prevent doggy escapes.

On the downside the turf is deader than disco and it’s fast becoming a dust-bowl.

The large trees are great providing plenty of shade to the numerous park benches.

George definitely had a good time, but he probably would have had as good a time anywhere else with as many dogs to talk to. (Even better he came back onto his leash like a deceptively good dog)

So I’m in favour of gated off leash dog parks, but still not entirely convinced about the equipment.

I wasn’t aware that there were ticks in Canberra???? Certainly not paralysis ticks which are the ones you need to worry about.

I have heard on the grapevine that they are building another at Lake Ginninderra, in the area that the Dogs Day Out is held (which, incidentally, is on this weekend)

I wasn’t aware that we there were ticks in Canberra???? Certainly not paralysis ticks which are the ones you need to worry about.

I have heard on the grapevine that they are building another at Lake Ginninderra, in the area that the Dogs Day Out is held (which, incidentally, is on this weekend)

I have been warned by dog trainers to be aware of small white dogs running off-leash. Apparently potential play pal suddenly becomes prey.

…until a big dog makes short work of a little dog, then all the folk who love pointing fingers at to who’s fault the Canberra bush fires were grab hold of it, and down it’ll go.

A great idea I think, but being the realistic and cynical person I am, I see problem brewing.

mmm..dunno about the equipment…looks a bit too much like the Mt Pleasant assault course…although, probably provides interesting stuff to pee on…

That’s the great advantage chihuahuas have, they are quite happy weeing on grass clumps. Anything bigger, and they have to do hand-stands (and they do).

my rotty has had a few bounds about the daramalan ovals with two greyhounds and two whippets lately – no playground stuff, just lots of space, wears her out, all good!

mmm..dunno about the equipment…looks a bit too much like the Mt Pleasant assault course…although, probably provides interesting stuff to pee on…

There’s that, but there’s also overprotective dog owner crippling their babies.
Play growls are play, the dogs know it but some people freak.

Apparently there’s one under construction in Tuggers.

Personally O’Connor oval has the best community and largest number of dogs.

Macquarie oval at the right time is pretty good too.

I find a common problem at a lot of them is intellectually disabled dog owners with anti-social dogs and I don’t know a good answer to that problem.

Those hoops and stuff are for the dog sport stuff that some humans like?
Playing with other dogs is the big thing. That way larger (potentially dangerous to us) dogs can learn to play safe. They don’t like to hurt their little mates.

have to be a very, very small and determined dog…

That’s the thing, innit? Dogs aren’t modern-day kids, whinging that there’s “nothing to do” and wanting someone to make entertainment for them. Dogs just like space, freedom and other dogs to play with. All you need is a decent fence, and bins for the pooh (and seats, I guess, so the humans can sit and socialise their way).

Looks interesting… How big are the gaps in the fence, could a small dog get out through them?

Chris Allen - 42 minutes ago
The one thing that does worry me. When all this has settled down and we are allowed to behave and live our lives as usual, wh... View
Darren Clarke - 24 hours ago
Why do co workers share a work vehicle???? View
News 1

Acton - 1 hour ago
April Fools Day prank. Right? If not, share the pain Andrew Barr, instead of spreading it Cancel the next rates notice for al... View
News 22

Mirjam Herzog - 8 hours ago
Chris Cross' pro argument citing the rates income from diplomatic missions is a highly contentious issue as the concept seems... View
Julia Ross - 16 hours ago
If it gets developed by the usual developers in Canberra, it will be a soul-less concrete wasteland like Gungahlin which will... View
Mark Valerius - 17 hours ago
A great idea for space that’s used for sweet FA. View
News 7

Ekaterina Smirnova - 21 hours ago
What could possibly go wrong? View
Christopher Miles Y Lopez - 22 hours ago
The ACT is under the throes of a neo liberal pseudo scientific dictatorship right now. I'm sure that the space that will be m... View
Peter Marshall - 1 day ago
If the magistrates and judges stop sending new people into prison, or expecting remandees to turn up to court, and if no-one... View
Opinion 17

@The_RiotACT @The_RiotACT
The coronavirus public health emergency has forced the ACT Government to call off Canberra's premier tourism event, Floriade, despite it being not being held for another six months https://t.co/0PJI2cDakg (4 hours ago)