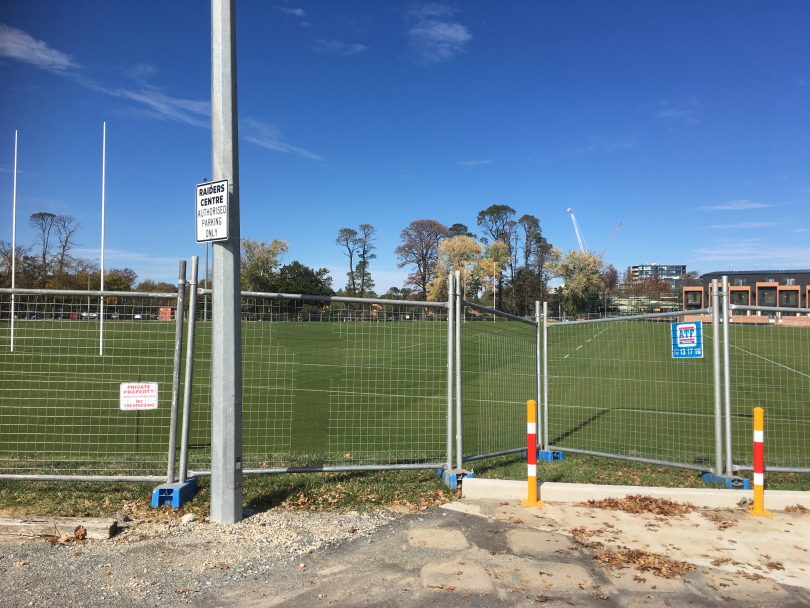 The Raiders Centre in Braddon in lockdown. Photo: Tim Gavel.

During the Super League war in the mid-90s in Canberra, uncertainty over the future of the code in our city was very real in the minds of supporters.

As we raced from one meeting location to another, from Canberra to Queanbeyan to the airport, just trying to get a handle on the eventual outcome was just about impossible given the situation was changing by the hour.

The uncertainty was creating angst among fans at a level well beyond the emotion of a loss or a perceived bias refereeing decision.

It ran far deeper with supporters genuinely concerned about the future of the code and the Raiders.

The anxiety currently experienced during this COVID-19 shutdown of the NRL, while nowhere near the levels of the Super League war, has created uncertainty like we haven’t seen since 1995.

That semblance of normality is about to be restored to a certain degree when players start training again this week in preparation for the re-start of the season on 28 May. 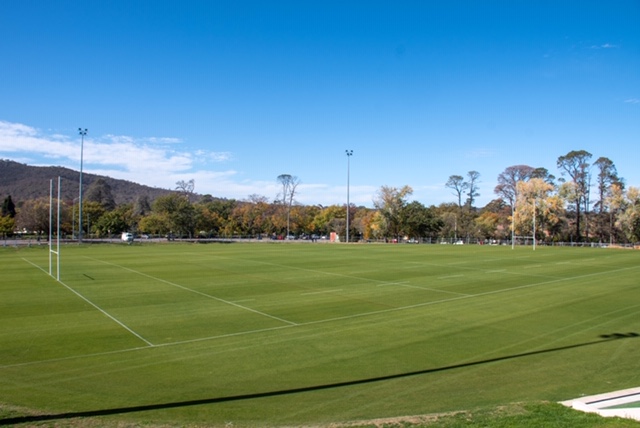 Picture perfect, the Raiders Centre is ready for use. Photo: Tom Logan.

The NRL has driven the return to competition harder than any sport in Australia, largely due to financial pressures, but there has been an element of concern that the longer no games are played, the more probable a disconnect with the fan-base could occur.

While the reasons for fan turn-off were totally different during Super League, the disconnect took the Raiders years to recover from. Only now are we seeing a return to the sizeable supporter base enjoyed by the club in 1994.

I must admit I was a sceptic about the code’s eventual recovery in the wake of Super League, just as I was about the likelihood of the competition re-starting on 28 May in the midst of the COVID-19 pandemic.

The sight of players at the new Braddon training centre with players about to start training again behind the steel fence as part of the quarantine requirements suddenly made it real.

It was no longer a pipe dream.

Rugby League has a habit of proving the doubters wrong and it appears as though it will be the case again.

One Response to The NRL might just pull this off, proving most of us naysayers wrong
Filter
Showing only Website comments

I’ve still got doubts Tim but let’s hope we were wrong. Keep up the great work and go the Green Machine!

Sue Skinner - 52 minutes ago
I never knew that this existed! Susan English have you seen it? View
Katie Erskine - 10 hours ago
So glad we had breakfast there with you Jennifer Lindley . A great piece of Canberra.... View
Ramon Montero - 11 hours ago
Incredible I worked par time there also my wife in the kitchen the early '70s was so busy every night, very popular. View
News 8

Michael Cameron - 3 hours ago
Shawn Mulgrue 1st..YES! View
Mandy Savery - 10 hours ago
How about delivering on campus for the students that are here? Or even delivering lectures live online instead of videos from... View
Opinion 11

Jack Horne - 9 hours ago
Charlie Karmenu Flask must have been with Hellstra in the aluminium lined carriages and metallic glazing that stops 5g emissi... View
Charlie Karmenu Flask - 12 hours ago
NASA can operate a helicopter on Mars and I couldn't ring my wife, from the XPT, around Albury/Wodonga...it's 2021 NSW/Vic ra... View
HiddenDragon - 12 hours ago
There's quite a lot to be said for this, so it probably won't happen - but if it does, it will make Canberra that much more o... View
Food & Wine 26

Kristy Lee Morrison - 9 hours ago
Ken McInnes Used to go for coffee there in the mornings on a walk and they’re always so friendly 🥰 Great family business... View
Breaking 1

ChrisinTurner - 13 hours ago
Why has the supply of vaccine to GPs been delayed? If GPs are capable of giving us our annual flu jab, why were they not used... View
Business 40

Daniel Kelly - 14 hours ago
Great news for our town, hopefully we won't be waiting 16 years for nothing again. https://www.youtube.com/watch?v=Umx5S1vCLU... View
News 48

Jeff Smith - 14 hours ago
I'm completely gobsmacked the Burns club can do this. Each year we seem to lose another little piece of public amenity in Kam... View
Yvette Croft - 18 hours ago
Tom Walsh They just want their equipment at a standard required by Australian and World Athletics, is that too much to ask fo... View
Tom Walsh - 18 hours ago
Yvette Croft they Cried about it, be realistic. View
Lifestyle 10

Andrea Trappes - 17 hours ago
Gosh my kids had nothing else but cloth nappies. They survived. View
Community 1

ChrisinTurner - 19 hours ago
A study a few years ago determined that the best effect on traffic congestion would be to delay the school day by 30 minutes.... View
show more show less
*Results are based on activity within last 7 days

Anyone who visits Canberra businessman Terry Snow's 2000-acre equestrian park at Bawley Point on the NSW South Coast is, quite...
Property 15

@The_RiotACT @The_RiotACT
The Wollondilly River and Mulwaree River flow through Goulburn, sustaining life for millennia and bringing peace and tranquility to the city https://t.co/rAHZDEMvOb (34 minutes ago)