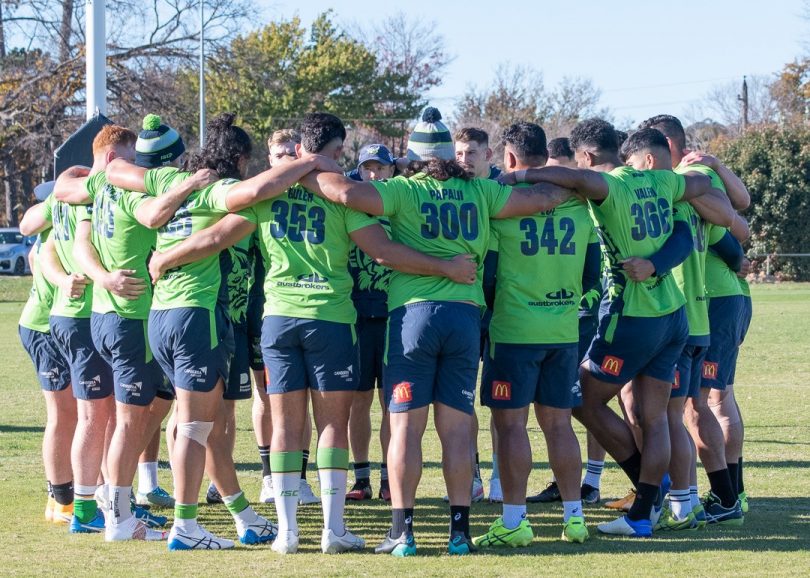 As the club contemplates its roster for next season, it’s obvious changes need to be made. Photo: Canberra Raiders.

If ever you needed evidence of the impact a halfback can have on a Raiders team, simply head back to the 1993 season.

In the second last game of the regular season, the Raiders beat Parramatta by a record 68 to nil, the biggest winning margin in the history of the NRL where the losing team was kept scoreless.

But the game on 22 August 1993 at Canberra Stadium won’t be remembered for the historic nature of the Raiders win; instead, it has become known as the game in which Canberra’s season came crashing down.

Ricky Stuart, who ended up being awarded the Dally M as the competition’s leading player in that year, went down during the later stages of the Parramatta game with a serious ankle injury.

I remember it well. It happened just in front of our commentary box.

Stuart was out and the Raiders would not win again that season, despite being premiership favourites.

The next week, following the Raiders huge win over the Eels, the Raiders prepared to play against the Bulldogs. Coach Tim Sheens brought in a young halfback named Trevor Schodel to replace Stuart.

Sheens gathered the media at Seiffert Oval on the Thursday night prior to the game to announce the selection and make it clear that Trevor Schodel would not be doing any interviews.

Such was Stuart’s stamp on the team that most of us had never seen Schodel play before.

As it turned out, Schodel would only last one game as the Raiders went down 32-8 to Canterbury, having easily beaten them earlier in the season.

The following week, for the major preliminary final against St George, a new halves combination was put in place for the Raiders, the third in as many weeks.

The Raiders had beaten the Dragons twice through the season, including a 30-2 win in round 16. In the major preliminary final, the Raiders looked rudderless and went down to St George 31-10.

The following week in the minor semi-final, the Raiders lost 30-12 to the Broncos, a team Canberra had beaten 20-4 in round 19.

With these losses following Stuart’s ankle injury, the Raiders were out of the finals series.

So as the club contemplates their roster for next season, it’s obvious changes need to be made. Either the Raiders sign a halfback or develop one of their own.

It’s easier said than done with the majority of experienced halfbacks already locked in for 2022.

Sam Williams and Matt Frawley are great back options, but I can’t see the club winning the premiership with either option. Don’t get me wrong, both have done a good job for Canberra, but following the departure of George Williams, there has been a lack of structure.

Brad Schneider is a young halfback coming through the Raiders ranks, but I haven’t seen enough of his play to make a judgement.

It could be that the Raiders head into 2022 with Schneider, Sam Williams and Frawley as their halves options. If this is the case, they may need to change the way they play with the side focusing more on creativity from elsewhere, such as fullback.

I didn’t mind the option of having both Hodgson and Starling on the field at the same time, along with the two halves. It was different, but there was a feeling that it was makeshift.

There is an air of uncertainty about the final makeup of the squad next season, but it’s all part of being a Raiders supporter. They can take you on a wild ride, that’s for sure.

Why don’t Stuart try Hodgson at 7?

Because he is on the outer and a pommy sook.

The raiders need to sign a half back as well as the left wing..cheers

Jokx Wama Rapa and HSS are our wingers for next year, no issues there.

Disappointing yes, but nowhere near in such dire straits as my old team the Tigers!

Btw TimboinOz, having also played in the unlimited tackle era when ball security was the main priority, I’d say anyone with your flair at half would have been lucky enough to have had support at the play the ball. I certainly can’t recall a whole lotta love from coaches or teammates for anything fancy like trying to get the ball away in the tackle. (In my case, as a scrawny runt in a fodder team in the Balmain Juniors the overriding priority was self preservation as the toughs of the Glebe Police Boys or Codocks (Cockatoo Docks) juggernauts – even the names terrified us – rolled over us on the way to the try line.)

Thanks, Tim. Such a sporting visionary.

They need more than a halfback and a new coach

Anthony Briscoe I hear they’re signing Nathan Cleary on $2M, Tommy Turbo on $2M, the Fox on $1.5M and 20 tackling machines on $100K each, no coach needed!

Even without the scrum the half-back is THE pivotal role in any RL game.
Seeing opportunities and making them into openings.

I became a scrum half in 1966 at 15 or so, because I’d started seeing possibilities when on the field and as balls were played after tackles.

I had 3 brothers who played and had taught me the basics.

But, when you can see openings you do stuff or tell, and the basics start to became as vital as they are, being basic to the created situation.

I used to be a big fan of the Raiders, including back when we had Chicka Fergusson.

Do my readers remember the mazing thing he did right on the opposition’s line, wiggling around them all for a try.

The Raiders need a half who can see opportunities, and make them happen, with the team.

And, the whole team should be encouraged to see them, too.

At least, once they have such a half, they might begin to see such openings themselves, and get behind the idea.

I’m sorry to say but they need more than a halfback. They need to axe six or seven players from their starting thirteen and replace them with mentally tough, hardworking players.

The rest of the squad need an attitude adjustment in defence because they lack intent and commitment in this area.

And finally they need a captain that has the ability to lead by example.