The return of the ‘Cock. @ Transit 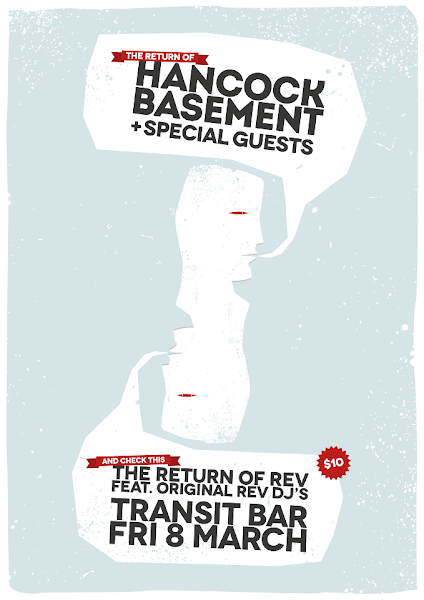 PARTY LIKE IT’S 2007! FOR ONE NIGHT ONLY! (MENTAL NOTE: YOU SHOULD DEFINITELY COME TO THIS!) FEATURING:

Imagine a Canberra Pre-Facebook, Pre-Vampire Weekend and Pre-Smartphones. Can’t do it? This might jog your memory – you were probably wearing a Palestinian scarf, ordering a Frappuccino at Starbucks and discussing the inevitable decline of Sanity whilst simultaneously wondering how it was still in business.

Now you can go back to that magical place where a tweet was something only birds did for ONE NIGHT ONLY this FRIDAY MARCH 8th at the TRANSIT BAR! Come early as capacity is limited! $10 on the door!

Sometime during the Myspace boom, Hancock Basement rode the zeitgeist from house parties and Monday night Phoenix gigs to become arguably Canberra’s most exciting musical prospect. They played with bands that would go on to do great things (The Presets, The Aston Shuffle, Goyte & Kimbra – separately!), at festivals with some of their idols (Spoon, Vampire Weekend, The Avalanches) and with some bands fated to fade away (Cut Off Your Hands, Bertie Blackman, The Sleepy Jackson, Youth Group).

The ‘Cock (as they had become affectionately known) got busy. They launched CDs and vinyl, toured the east coast multiple times, had egg-related run-ins with Daniel Johns and Luke Steele in the studio, and eventually took out Triple J’s second Canberra-centric unearthed competition (post-relaunch) in 2008. In 2010 they made a music video that was featured on Rage for their single “One in A Million Does”, which was heard in ads for Just Jeans, on Bondi Rescue and on US TV shows and college radio. Then, without warning, Hancock Basement disappeared.

Maybe they were ahead of their time. Maybe they burnt the candle at both ends. Maybe their wave broke too soon, or at the wrong part of the beach. But for those concerned they may never be able to re-live the magic Hancock Basement created, fear not. They still feel the power of Canberra, and, by that same power, Hancock Basement will once again bring their potentially decade-defining music to the capital for the 2013 centenary weekend for two shows – one at Transit Bar on the 8th of March and a final performance after the fireworks at the Canberra 100 celebrations on March 11. Don’t miss either one or both of these shows!

Chris Kubara - 30 minutes ago
My Hockey involvement started quite a few years ago firstly as an unpaid chauffeur, then Team Manager, Junior Coach and then... View
Annalise Rae - 1 day ago
Xtiney yessss we must! It’s so fun (and smelly, the steam literally wafts off the players as they squeeze past the crowd!).... View
Xtiney Beany - 1 day ago
Annalise Rae lets go so I can have memories View
News 53

TR Saechao - 7 hours ago
Trains from Osaka-Tokyo and Paris-Saarbruken travel at 320kph, reducing a 5-6hr car ride to a 2.5hr train ride. It’d be nic... View
Keith Anderson - 13 hours ago
Must be an election this year... View
Phillip Jones - 16 hours ago
....only in the LNP held electorates though.... View
News 11

Sam Wong - 22 hours ago
Well done View
Ash Pagett - 2 days ago
May Agnew not sure He had much to do with it. The RFS/ESA did the job View
Liz Lyell - 2 days ago
Great news, thank you to everyone who helped. View
Opinion 91

John Hynes - 1 day ago
Why isnt the fedral government helping? Simple. We have a bunch of people in Canberra who point blank refuse to vote liberal... View
Ashley Wright - 1 day ago
Amanda Adams because the batteries still need charging by running under the wires. Or you do like Sydney did on George street... View
Tijana Delov - 1 day ago
Ashley Wright true.. but why is that? The technology is there to move away from petrol. Could have built dedicated lanes for... View
News 72

Garry Dodds - 1 day ago
Shannon Battison article said we suburbs are boring and there need to be a change,well what are those changes as you don't ap... View
Amanda Beattie - 2 days ago
Not mentioning the lack of parking on the streets be cause the roads are too skinny and unable to park on the lawn as there a... View
News 7

Suzanne Milne - 1 day ago
Meanwhile the staff just get on with it View
Sharen Petrovsky - 2 days ago
A change of Government will not change the culture of The Canberra Hospital - it needs to come from the Management. This has... View
News 49

UPDATED 4:00 pm A lockdown at Canberra Grammar School has been lifted after a threatening email was sent to the school...
News 49

A development application to open a McDonald’s restaurant at Chisholm has been rejected by the ACT Planning and Land Authority (ACTPLA)....
News 72

A cookie-cutter approach to planning and overdevelopment is condemning Canberra's new suburbs to boring uniformity and making them incapable of...
Police Wrap 1

ACT Policing has released the CCTV footage of an assault that occurred at the 88MPH nightclub in Civic at about...
News 24

Motorists in the ACT who use their mobile phones while driving may soon have an extra deterrent with the ACT...
News 53

Upgrading the Canberra to Sydney rail link so it can provide a faster service has been listed as a priority...
Opinion 91

It should not have come as a surprise that the ACT Government would opt for a wire-free run to Commonwealth...
0

ACT Policing is seeking witnesses, CCTV or dash-cam footage of two ram raids that occurred within one hour of each other...
Property 1

When corporate landlords dream at night, they dream of buildings like Garema Court. Fronting Garema Place, the landmark block in...
Property 32

Canberra Airport is expecting to clinch direct connections to China, New Zealand and Vanuatu within the next eight years and...
Opinion 91

It should not have come as a surprise that the ACT Government would opt for a wire-free run to Commonwealth...
News 72

A cookie-cutter approach to planning and overdevelopment is condemning Canberra's new suburbs to boring uniformity and making them incapable of...
News 53

Upgrading the Canberra to Sydney rail link so it can provide a faster service has been listed as a priority...
News 49

A development application to open a McDonald’s restaurant at Chisholm has been rejected by the ACT Planning and Land Authority (ACTPLA)....
News 196

The 1.7 kilometre extension of light rail from Alinga Street to Commonwealth Park via London Circuit will be wire-free, in...
Property 32

The ACT Planning and Land Authority (ACTPLA) has rejected claims that it's a toothless body unwilling to fight for its...
News 24

Motorists in the ACT who use their mobile phones while driving may soon have an extra deterrent with the ACT...
News 29

@The_RiotACT @The_RiotACT
Bid for a piece of Australian history as five iconic Holdens from 1948 to 1955 go under the hammer thanks to AllBids https://t.co/5rwpa5XTUV (3 hours ago)

@The_RiotACT @The_RiotACT
National Gallery of Australia’s newest commission called In Muva We Trust is a spectacular video projection that will enliven the gallery’s iconic 60m tall façade throughout Enlighten https://t.co/ceUwH6pdxW (4 hours ago)