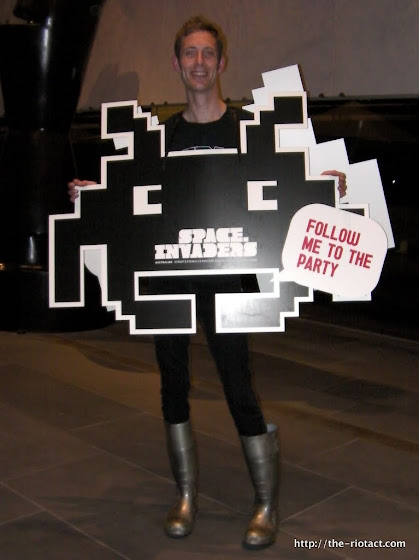 The National Gallery’s Space Invaders exibition of Australia street art opened on Friday night. The exhibition is as striking and iconoclastic as you would expect from a premium collection of stencil and zine art.

As the launch was a ticketed event open to the public it’s worthy of review in it’s own right.

It can perhaps best be described by saying that by 11.30pm at the after party my date was stumbling drunk and had disappeared to smoke cones with a German, and three women had given me their phone numbers.

(normally I’m the sort of guy who goes home wishing he’d remember to ask for a number from the women I’ve been speaking to).

So it was a pretty sensational blow out and by the time I went home around 2am it was still going strong at the after party venue in New Acton.

With a younger crowd of around 500 and an open bar, including a vodka bar smashing out cocktails there was a lot more broken glass than the gallery is used to.

With a DJ pumping and the exhibition’s art work projected onto the side of the building the new gardens and Gandel Room made a great setting.

The canapes were sensational.

The artists visiting to see their work go on exhibition were trying to play it as cool as only big city street artists can be “oh well, I’ve had my work exhibited at galleries in Melbourne you know”.

But when their own pieces were projected up 10 metres high on the wall there was still some jaw droppage.

The after party at New Acton was a paid bar but still a sensational shindig with desert theme hor d’oeuvres something I’ve never seen before.

Well worth keeping your eye out for future similar events at the Gallery.

Also check out the exhibition if for nothing else than the chance to buy some very cool t-shirts based on the art.

Haha thelozenger you should blame some of the other employees for that rudeness, my group of friends was told by a waiter (after we asked for a beer) to wait by the door specifically because drinks came from there (and no, we didn’t do that). Besides, if your team had gotten drinks out fast enough there wouldn’t have been thirsty drunk socialites waiting on you at the kitchen door ;]

I was working there and whilst a lot of people were lovely, some were extremely rude! People were waiting outside the kitchen doors to mob us as we came out with food and drinks, and I got pushed over as one woman tried to grab the champagne bottle I was taking around to top up drinks right out of my hands!

Plus all the pretentious ones who look down on you because you’re working there, not at the party. It was a public event, not a VIP one! You paid to be there!

My one gripe was the fact that upon arrival I asked an NGA employee when the gallery would be open for viewing and was told it was “being set up”. I asked another employee about an hour later and was told it was closed for the night! Great party though and the afterparty at NewActon was fun, minus the Sydney students walking around dropping names and design courses to anyone dumb enough to care. We get it, you’re unemployed, go away.

John Goodwin - 5 minutes ago
29th April 1770 was when an explorer landed /discoverd Australia View
Chris Hobbs - 3 hours ago
Unless I'm missing something, James cook landed in botany bay on 29th April 1770. The first gun shot was fired on this day. I... View
Linda Stapleton - 10 hours ago
Changing the date will just be like reconcilliation day.. it becomes a nothing action. remember when they said we had to have... View
Community 6

Lucy Baker - 1 hour ago
Michelle Langsam please share to church? View
Robyn Jones - 5 hours ago
Where is it located View
Monica Tiffen - 5 hours ago
I find it hard to put a light-bulb in!!!!! View
News 16

Ali Geez - 4 hours ago
Russell Nankervis our ex-PM once said ‘mum and dad should chip in for their kids’ View
David Graham - 5 hours ago
Is it on stalled or installed? View
Russell Nankervis - 11 hours ago
As if students could afford an apartment that close to the Parliamentary triangle View
Community 42

Peter Major - 6 hours ago
Hugo Young Ride in single file and comply with ALL road rules, do not impede the flow of traffic and there are minimal proble... View
Kirby Haines - 6 hours ago
lol sure, costs 10x in admin what it would recover in revenue. Where do you draw the line? Are you going to insist some gorml... View
Hugo Young - 7 hours ago
Adam Jovanovic I'll be sure to suggest to my cycling club that we start running groups rides on paths. A group of 15 people t... View
Opinion 53

Adam Jovanovic - 7 hours ago
Daniel Burden Government owning up to its own mistake buahahha View
HiddenDragon - 7 hours ago
Unless there's a nice little quid pro quo coming up for the ACT in the next federal Budget (dream on....), this outbreak of "... View
Opinion 21

@The_RiotACT @The_RiotACT
Sweet Piper had a litter of puppies when she was only a baby herself, and is now at @rspcaact waiting to find her forever home https://t.co/VHBQOCXP4f (7 hours ago)