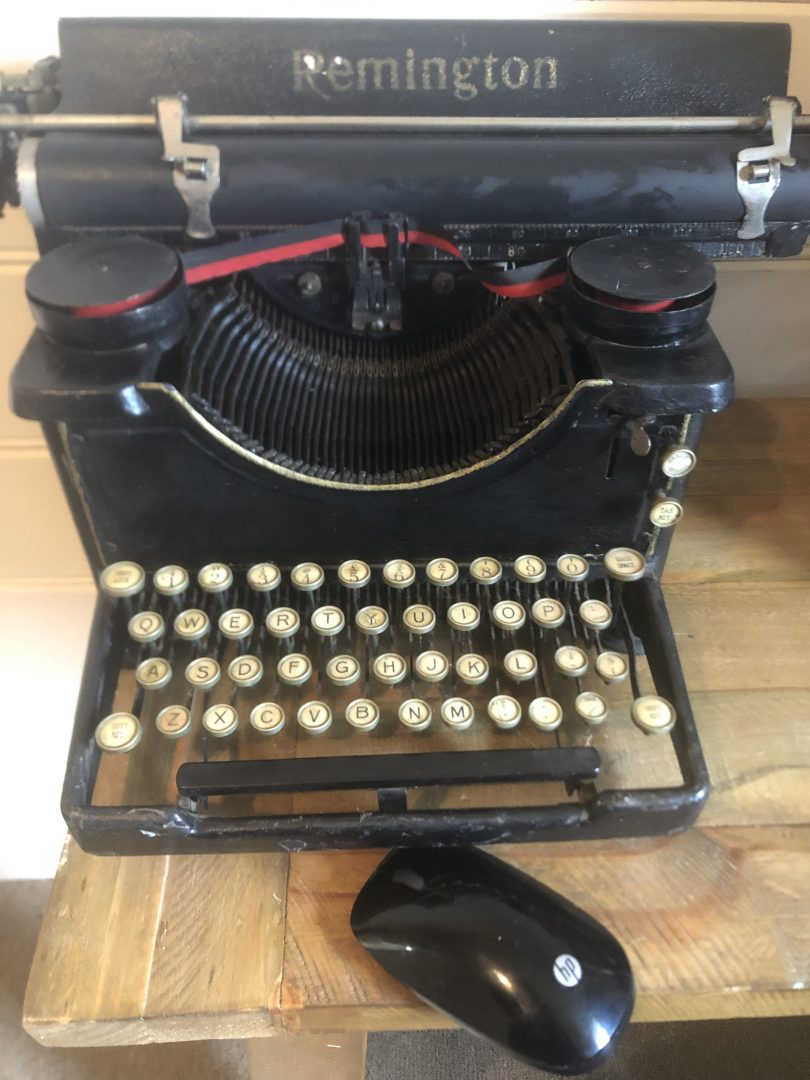 One click and we’re back to the good old days. Or have a really heavy object to throw at the laptop. Photo: Sally Hopman.

I think I’ll start up a new little project. Something suitable for a middle-aged woman that won’t interfere with her knitting. I’m going to rid the world of computers.

While I’m at it, I might also round up and hide, temporarily of course, those four-year-old children who give you that look when you ask them a perfectly reasonable question like – how did you do that?

Working from home, I attend a couple of online meetings daily. They’re called stand-ups. Mistake No 1: I sit down.

They’re at the same time every day, we talk about what we’re working on and, for one of them a week, my favourite, we mostly talk about our animals and manoeuvre them subtly in front of the computer’s camera for others to admire.

For a week or so, this laptop’s microphone wouldn’t work. It told me I wasn’t connected. I was. It went on to allege that there were too many people on the one online meeting call so I couldn’t be heard.

It just continued to do its best to embarrass me in front of my online colleagues to the point where I abandoned all pretence of computer literacy, and wrote notes on the screen saying I couldn’t hear them, could they hear me and, it doesn’t matter because I’m going to blow myself up.

READ ALSO: Why modern technology is such a turn-off

On my day off, I went to the local IT shop, of which, up until then, I’d thought sold clothing for the IT crowd.

They told me my mic (computer talk for microphone) no longer existed and that I needed to buy a really expensive set of headphones to communicate with my colleagues. This information only forthcoming after I ended up stalking their shop when they didn’t answer the phone, email or even open up when they said they would. It’s like if you have computer skills, you can rule the world. In your own time.

To learn how to do this IT stuff you have to know what you’re looking for in the first place.

How do you ask them to fix it if you don’t know what’s broken in the first place? Or when it works one minute then crashes and burns the next. Yes, you’re supposed to ask a child or Google it but sometimes, you just want the answer without having to ALT-DEL yourself. Or worse still, Control Z yourself so everything comes back to haunt you.

It is such a me and them thing. And me has had enough.

READ ALSO: When it comes to old remedies, who can you trust?

I want my typewriter back.

Not that I ever used this one for work – I may be old, but if I had used the old Remington for work, I would have died before I got old. No, it was a gift from a friend who knew my dream of living and working in Luddite Land. Where people talked to each other’s faces, computers were great big lumpy things featured in bad spy movies and the Internet was said by someone with an accent to mean, in the net.

The only time I feel confident with anything computer-al is when I visit my mother in her nursing home. Being the youngest person there by a hundred or so years, the residents rush at me, waving their mobiles around in the air, asking me to call the grandchildren, admire the long-dead cat, what this message means and can I order them a taxi so they can escape from the place. Or at least order a pizza.

If you are having trouble with the sound in video conferences, try using your phone. Microsoft Teams, Zoom and other systems, allow you to dial in for the sound and link this with your computer for the video (you can do the whole thing on a smart phone, but the screen is a bit small). Apart from better sound, because the audio is via the hone network, it will keep working even if there are problems with your Internet connection.

I won’t comply with QR codes, it’s a slippery slope of losing freedom

John Haddon - 26 minutes ago
Brian Woodbridge not really, most contractors are just ex-APS or ex Defence who have good skills in demand and want better pa... View
John Haddon - 35 minutes ago
I've always questioned why IT staff need to be APS. APS should be customer facing, whereas IT Staff are just providing a serv... View
Anna Vavrina - 8 hours ago
Yep. Going on for years. View
News 19

Rien Wiersma - 39 minutes ago
Raiders will win the Grand Final Jack Josef Brzozowski View
Rick S Tar - 10 hours ago
Michelle Kwan a better camera and or drone would of captured the moment better. Cyber Monday still has some sales. View
Charlie Williams - 10 hours ago
In my time it was up and down all the time and didn't really seem to have anything to do with local rainfall- pub talk in que... View
News 137

Andrew Sage - 9 hours ago
On my ... View
Denise Bourke - 9 hours ago
We love the work of mower teams and their supervisors. Keep em coming. View
David Fenwicke - 9 hours ago
The grass needs to be mown before it sets seed otherwise noxious weeds like Chilean needle grass which I saw on Northbourne a... View
News 7

JC - 9 hours ago
As was the case with delta the over reaction as you put it is just a pause to buy time to see how big a problem it really is.... View
HiddenDragon - 12 hours ago
With Australia's international border being "thrown open" (as tonight's TV news reports are reminding us) from next Wednesday... View
jorie1 - 13 hours ago
Close the international borders to everyone but Australian citizens! And have strict quarantine for Aussies coming in here .... View
Opinion 58

The housing market in Canberra is absolutely back with a vengeance. There were a record number of auctions last week:...
News 19

Up to 2600 dwellings could be built at Bruce over the next 15 years in a massive land deal that...
Public Sector 24

Two reports this week have highlighted the growing housing divide in the ACT, in the rental market, and between renters...
Public Sector 24

It could be a case of all quiet on the War Memorial front after the National Capital Authority gave the...
News 19

@the_riotact @The_RiotACT
Many Canberrans would like to see more bang for their rates buck. An extra Assembly sitting day could help with that, says Ian Bushnell https://t.co/Ke1HTvAzdi (18 minutes ago)

@the_riotact @The_RiotACT
The battle lines are drawn. Who do you know that needs to get drenched? The Great #HaigPark Water Fight is back, with this month’s Play Outside Day to transform Haig Park into a #waterfight arena https://t.co/XVI03UjeCX (10 hours ago)