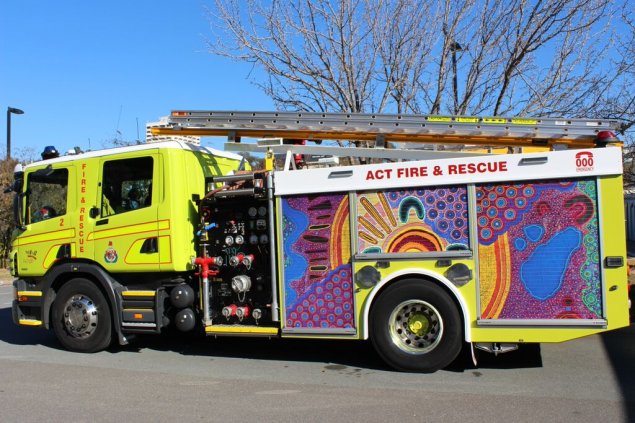 The ACT and surrounding areas face a total fire ban today with the temperature set to reach 39 degrees and west to north-westerly winds gusting to 65kmh forecast.

The fire danger rating for today in Canberra and nearby NSW shires is SEVERE, which means that if a fire starts, it may be uncontrollable and move quickly.

Eight units attended the fire reported at Spring Hill late yesterday. The public may have noticed some smoke in the area.

The fire is listed as under control. The ESA advises the community to go to the NSWRFS website for updates.

Meanwhile, the ACT Ambulance Service has strongly advised the community to take sensible precautions to avoid heat stress today. Signs of heat stress can include nausea, dizziness, fainting, weakness, headaches, vomiting and the loss of sweating. The most vulnerable to heat stress are young children and the elderly.

Drinking water, the best liquid to ensure that hydration remains at a safe level;

Reducing intake of alcohol and excessive caffeine as these can have a dehydrating effect;

Wearing sensible clothing including a hat and sunscreen;

Avoiding strenuous physical exercise in the heat of the day;

Seeking air-conditioned environments or shade when outside;

Not leaving children or pets unattended in hot cars; and

Calling Emergency Triple Zero (000) for an ambulance if someone is showing signs of heat stress.

Given the extreme conditions today, ACT Emergency Services Agency Commissioner Dominic Lane yesterday declared a Total Fire Ban for the whole of the ACT under Section 114 of the Emergencies Act 2004 from 12am today till to 11.59pm tonight.

If a fire starts at the forecast fire danger level of SEVERE it may be uncontrollable and move quickly. Flames may be higher than roof tops.

Expect embers to be blown around. Spot fires may occur up to 4km ahead of the main fire.

There is a chance people in the path of a fire may be injured or die. Some homes and businesses may be destroyed.

Leaving early is the safest option for your survival.

Well-prepared and actively defended houses can offer safety during a fire.

The ESA advises you to make sure you know where you will get more information and monitor the situation for any changes. You can do this through local ACT media outlets, the ESA website www.esa.act.gov.au, the ESA Twitter and Facebook accounts or by calling Access Canberra on 13 22 81.

The following nature reserves and roads will be closed for the duration of the Total Fire Ban:

The Boboyan Road and Brindabella Road remain open to through traffic.

The Tidbinbilla and Namadgi Visitors Centres will remain open.

Swimming areas at the Cotter and along the Murrumbidgee River such as Kambah Pool, Pine Island Point Hut and Uriarra Crossing will remain open.

Electric BBQs in Parks and Reserves including the National Arboretum Canberra and in Canberra’s urban parks will be available, however all gas barbeques will be turned off.

If a fire starts, the ESA advises you monitor the situation for any changes through the ACT Emergency Services Agency website www.esa.act.gov.au, the ESA Twitter and Facebook accounts, local ACT media outlets or by calling Access Canberra on 13 22 81.

Meanwhile, ACT firefighters are investigating the cause of a fire which significantly damaged a home in Florey last night.

Four people were home at the time but self-evacuated before alerting ACT Fire & Rescue.

It is believed the fire began in a bedroom and has been deemed not suspicious.

There is significant smoke and fire damage throughout the home. The fire spread to a nearby carport and the car inside also caught alight.

Crews are conducting atmospheric monitoring of the area.