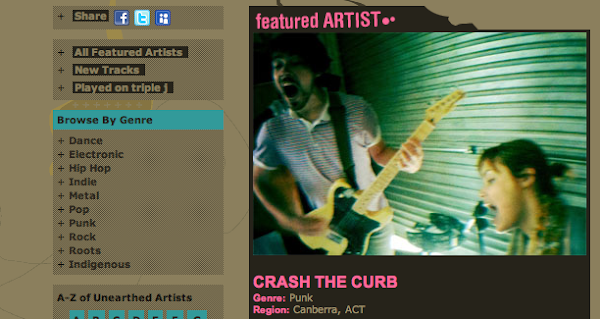 Unearthed Review hitting its stride again. Rather than choosing at random and being subjected to every lonely teen who thinks he’s the next Mike Skinner we’re going to work through the acts that have earned themselves a drum logo.

Today we’re having a listen to Crash the curb.

They had this to say about their music in their featured interview:

We pretty much wanted to make a band that was no bullshit with lots of energy and a bit rough around the edges. We are definitely a punk band but we try to incorporate indie rock elements similar to Pavement, Built to Spill Etc.

Never mind the bollocks, this is The Pixies before they got old and fat.

I have no higher praise than that.

The hooks might be derivative, but they’re damned catchy.

The songs are nicely paced.

There’s a sly smile to go with the punk sneer.

If you like your music turned up loud every now and then you’ll want to get downloading!

Excuse me, I’ve got to step away from the keyboard to do some pogoing.

Nick Savino - 42 minutes ago
I prefer making coffee at home don’t see the point of cafes everyday View
Nick Savino - 44 minutes ago
Stephen Page-Murray correct the food is rubbish I complained so many times that the food manager and his 2 mates came to my r... View
Amy Nelson - 1 hour ago
Sashika Mendis we loved living there. Now living in Melbourne, a “most liveable city”, we question why more people don’... View
News 5

Marc Edwards - 14 hours ago
Maybe the Berra Party View
Paul Leins - 14 hours ago
Sure, just bet a former liberal will be a real check to his mates in the liberal party 🙄 View
Michael Ilsley - 15 hours ago
Glad to see him engaged in the community after the tragic loss of his son. View
What's On 1

@The_RiotACT @The_RiotACT
Planning authority has rejected the controversial W2 high-rise proposal in Woden but it is not going away https://t.co/FlTw7zPKZc (10 minutes ago)

@The_RiotACT @The_RiotACT
A Mini Cooper drove through the shopfront at KFC Hawker last night. Remarkably, no one was injured https://t.co/5sfUWXD1q0 (56 minutes ago)