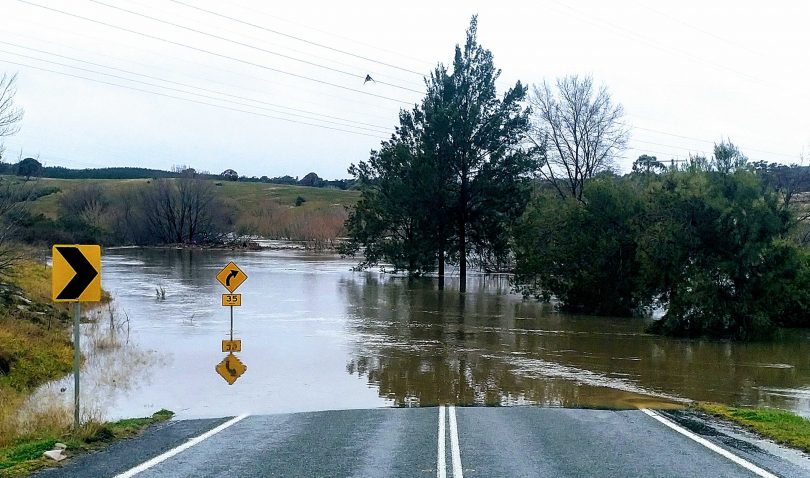 UPDATE 7:30 pm, 9 August: A man has died while kayaking in the flooded waters of the Murrumbidgee River near Point Hut Crossing this afternoon (9 August).

At about 2:00 pm, the man, one of a group of kayakers, became stuck under a bridge in his kayak.

The man was located about 6:20 pm unresponsive in the water, with ACT Policing confirming the man had died.

“The water levels are very high and the water is flowing very fast and is also very cold. There are also a lot of obstacles under the water as well,” said Inspector Brett Booth.

The remaining group of kayakers is assisting police with their investigations at the Tuggeranong Police Station.

Police are urging the public not to enter or play in floodwaters or swollen rivers.

“While river levels are high, there is swift and very cold water about. It’s very dangerous and we recommend that people stay well clear of the banks of rivers and don’t enter the water under any circumstances, regardless of your own abilities,” Inspector Booth said.

The Murrumbidgee River is one of many in the region experiencing major flows, with all creeks and rivers in the area swollen following flooding rain since Friday.

ACT Policing will now prepare a report for the coroner regarding the death of the man at Point Hut.

Tramcar Trev - 11 minutes ago
I must be really old, I remember when to get to Broulee it was dirt road. View
Clive John Trenton - 59 minutes ago
Come on people. It was replaced for a very good reason! As an old bridge it was likely costing a fortune to maintain due to i... View
Mitch Carrington - 1 hour ago
Was fun riding over this for some reason Mark Humphrey Wheeler View
News 35

Greg Myat - 15 minutes ago
Warwick Bradly Take it to Belco where people are, first. Or past asio and russell offices across kings ave. It needs to go pa... View
Greg Myat - 18 minutes ago
Martin Budden Every road will just be one big carpark then. View
Tramcar Trev - 41 minutes ago
$162million for about 1km of light rail does seem excessive. why do they insist on laying the track inn concrete where the tr... View
Community 7

Grahame Barnett - 34 minutes ago
We "bribe" our magpie gang. We feed them. They don't attack their feeders. View
Karen De Britt - 35 minutes ago
Feed her mealworms, she'll come around 😁 View
News 28

whatwik - 46 minutes ago
Ha, try NSW regional travel. Disappointing yes, but prudent. Some of us do wonder about the obsession with the ACT Chief Mini... View
chewy14 - 2 hours ago
JC, No spin here, just facts. Whatwik claims that others have had to backtrack on their plans. Except none of the other state... View
Community 25