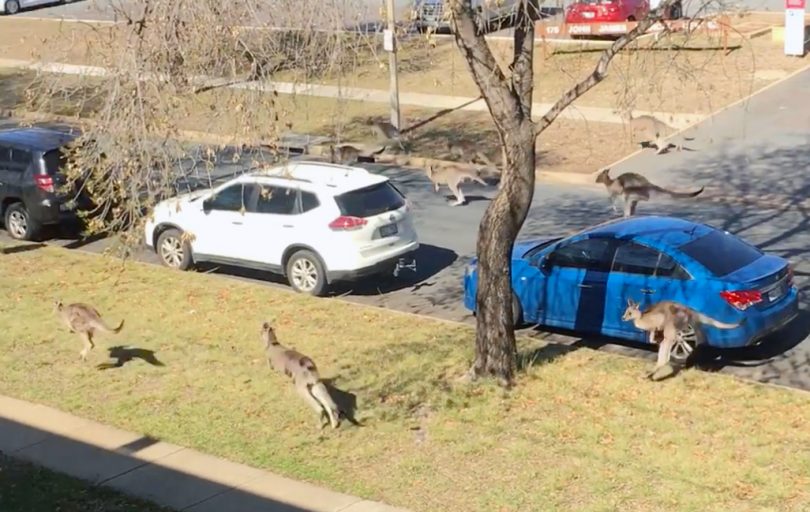 A Facebook video of a mob of about 20 kangaroos hopping at speed past a Deakin office on Tuesday has gone viral – attracting 1.6 million views and 29,000 shares to date with interest rapidly increasing.

The video taken by Canberran Matt Bailey from the window of his Denison Street workplace seems to live up to overseas myths that kangaroos bound down the main streets of Australian cities.

The sheer number of kangaroos hopping through the heart of Canberra followed by the fun commentary provided by Matt’s workmates adds to the video’s slightly comic appeal.

“Only in Australia,” says one colleague. “Here comes the male,” says another as the initial mob of kangaroos is followed a few seconds later by a large buck bounding down the centre of the road.

“Here comes the big fellow – get off the road dumbo,” comments another colleague.

Matt told The RiotACT that the interest in the video took him by surprise.

“The reaction has been ridiculous,” he said. “I’ve had interest from a number of media outlets both here and abroad.

“I only ever put the video on Facebook for my friends to see. I then had a couple of friends ask if I could make it public so they could share with friends overseas. From that, it took off.”

Matt suspects the kangaroos would have come from the Red Hill Nature Reserve and said it wasn’t a total surprise to see them in the area but he was surprised by the number of kangaroos.

“We have seen them on Denison Street a number of times but only in small numbers like two or three,” Matt said.

“The size of this mob was a surprise. They came down past the hospital on Strickland Crescent and then got caught in the car park. They then made a right turn and that’s the point I started filming.”

More and more kangaroos have been seen in Canberra suburbs and near local roads in recent times as the extremely cold and dry weather depletes grass supplies and kangaroos are attracted to the ‘green pick’ in these areas.

ACT Parks and Conservation director Daniel Iglesias recently told The RiotACT that Canberra is heading for a record year for kangaroo-related road crashes.

Canberra is heading for a record year for kangaroo-related road crashes as more kangaroos are attracted to the ‘green pick’ by our roadsides. Photo supplied.

Mr Iglesias said that there is likely to be close to 4,000 eastern grey kangaroos killed on ACT roads in 2018 – an increase of around 1,300 on previous years and something “never seen here before.”

He said that Long Gully Road and Sulwood Drive are currently seeing the highest number of kangaroo-related collisions but there are a number of other kangaroo-collision hotspots including the roads around Red Hill Nature Reserve.

Matt said that he, like many others, has seen kangaroos in local suburban areas.

“I think they have always been a concern in Canberra, but the current state of the countryside seems to be pushing them further in as they look for decent feed,” Matt said.

Below is the Facebook video of the kangaroos which was taken by Matt Bailey and has been shared from his Facebook site.

Jon Rooks - 9 minutes ago
I'm glad Belconnen is being further developed as a community hub. My main concern are the single lane 'spokes' (like Bindubi)... View
Elspeth Shannon Rollason - 7 hours ago
All these buildings. If families move here then where are the playgrounds for kids to be active? What is being done about saf... View
News 3

David Stephens - 5 hours ago
In the Heritage Guardians submission to the recent NCA consultation process, we said this about how the Memorial consults: "N... View
Stephen Saunders - 5 hours ago
Mr Anderson, it is laughable to quote a skewed “survey” of punters already visiting AWM. Ms Barnes, as ever, a puppet. Ga... View
Property 1

@The_RiotACT @The_RiotACT
Discover what Kent Nhan from XO and ILY loves about #Canberra dining and what's in his own pantry https://t.co/RtSwUJSBZF (31 minutes ago)