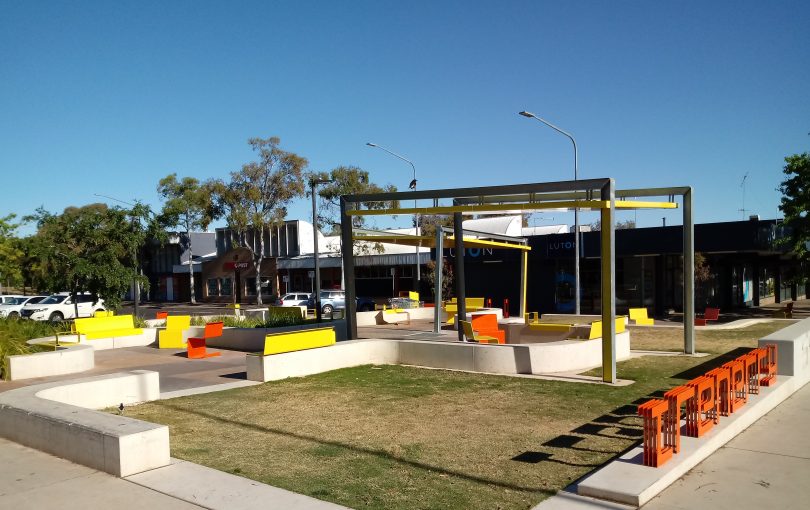 The upgraded Trenerry Square in Weston is not what the community asked for. Photos: Ian Bushnell

It cost more than $800,000, it’s not what the community wanted and nobody uses it. Welcome to Weston’s Trenerry Square, featuring fluro orange and yellow metal seats, concrete borders, some industrial shade structures and, thankfully, a patch of turf.

The idea was a good one – to upgrade Trenerry Square on Brierly Street opposite Cooleman Court but the execution has left the locals nonplussed.

Weston Creek Community Council president Tom Anderson says a combination of unsociable design and poor choice of materials had made the square, completed in March 2018, an uninviting place to be.

He said the metal seats needed a covering so they were not either burning your bottom off or freezing it for more than six months of the year, and they needed to be closer together.

“There’s not a table in there, there’s not two seats close enough together where you can actually have a conversation,” he said. “A mother and two children can’t go and sit there at a table and have morning tea, or lunch.”

The company behind the project, Redbox Design, says on its website that “the refreshed plaza has a unique and contemporary feel created by an arrangement of interesting elements that enhance user experience and inject much-desired vitality into the place.” 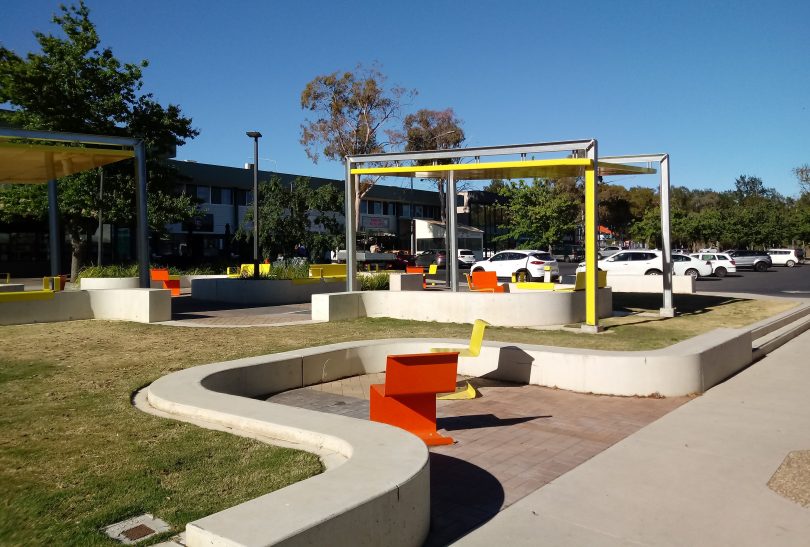 Except, according to Mr Anderson, ”it’s a space that is rarely used by anyone.”

Mr Anderson said the council spoke to City Services in June about ways to improve it but had not heard anything since.

While there was initial consultation when the project was first mooted, he said it took six months to get officials to come back to discuss the final design and when they did it was a fait accomplis.

“They came along to a public meeting and said we’ve signed the contract today, prior to any further feedback about what it was going to be like,” he said.

“We’ve got what we’ve got because that was what was decided by City Services, and it’s just not really usable.”

But Mr Anderson said his advice was that it could be improved without much extra cost.

“The infrastructure is there and you can fiddle around with it and make it much better,” he said.

But it will also need more protection from the wind, mainly the westerly, to make it more hospitable.

Mr Anderson said the temporary furniture in Woden Square was a much better outcome than this.

Whoever decided on it should be made to pay for it. Perhaps then they might think sensibly next time. Or sack them.

I'm sure this is an example of 'hostile architecture', specifically designed so that homeless people can't use it. They have made it so hostile that no one wants to use the space.

As an example of the intended hostility, the seats have two arm rests set in them, that splits the seat into thirds. You can't even sit with your bag right next to you.

Terrible waste of money on a hot/cold/exposed area with no shade, no tables and lots of concrete! No one uses it! Coolemon Court is tired and needs a complete upgrade. The ACT Govt needs to listen to the people !

Why didn’t they fix the roads around Coolo instead of making this ugly area??

Does not seem to have any shade trees. Typical lack of effective consultation. When will the ACT government learn that consultation is more that just telling people what they are going to get.

Actually a giant Pac Man could only improve it

$800K somebody is making tremendous profit. ACT gov got con!!!

Yep, pretty well useless. The money would have been much better spent on the tired old playground on the opposite side of Coolo.

Aaron T Williams it’s ‘Weston’ can def tell your from the north side. Lol

Convert it to motorcycle parking.

“the refreshed plaza has a unique and contemporary feel created by an arrangement of interesting elements that enhance user experience and inject much-desired vitality into the place.” How many times have we read that drivel. My bet is they’d use the same boilerplate rubbish for a safe injecting room. Come to think of it …

Pull it up and recycle it at the Woden Light Rail Terminal which looks like being another dud plan also. Build a multi storied car park on the site for all the Molonglo shoppers who come over to Coolo as the Government have dudded them as there’s no prospect of a nice big shopping complex there!

Put the car parks back in that used to be there. Parking is a shortage at coolamon court.

Look on the bright side! Several hundred thousand dollars cheaper than Andrew Barr’s Container Village -and no broke businesses involved.

cant help it when gov still need to "waste" money on openspace n prevent parents from suing from contamination from birdsht.....the world we live in now.....

What an ugly looking bomb site. There is nothing that would even slightly recommend it as a place to sit and relax. Hot, harsh and looks like a licorice allsort. Not sure anyone would use it apart from skateboarders challenging themsleves on it.

Jeannou Zoides - 59 minutes ago
Disappointed Labour that’s all I can say we too need to have top education View
Nick Anderson - 5 hours ago
Absolutely not, unless each and every arrival presents a valid vaccine certificate with their visa and spend two weeks in qua... View
Shehzad Sarwar Hossain - 6 hours ago
Great thinking and in the right direction. View
Opinion 5

ChrisinTurner - 1 hour ago
A contribution of less than 1% towards the LR network won't go far. However this amount would be against the advice of Infras... View
jwinston - 9 hours ago
I wholeheartedly agree with your summation here Chewy14. This is a bit off subject but I’m very interested in the comment y... View
keek - 10 hours ago
I think you believe light rail to be a far bigger election issue than it actually is. I've found that outside of here, very f... View
News 5

bryansworld - 5 hours ago
However, this would create a signal for new suppliers to enter the market and undercut the original ones who are trying to go... View
keek - 6 hours ago
Great way to ensure the prices of these things all rise very sharply once suppliers know there is an easy 15 grand in it for... View
Food & Wine 2

Ol L - 7 hours ago
When COVID 19 blows over most will rush back overseas. Hope there’s no COVID 20 or they will all want to rush back here aga... View
Community 1

Capital Retro - 7 hours ago
Are public toilets included in the plan? View
Community 13

Ol L - 9 hours ago
Brindabella s? Would look like nothing recognisable as there hardly the Himalayas View
Food & Wine 1

TimboinOz - 22 hours ago
How to spend money, in public? AKA Konspikewus Konsumption. Look at ME!!!!! YAWWWWWWrrrrm. Build a veggie garden, grow your o... View
News 24

chewy14 - 23 hours ago
BJ, You aren't meant to bring these things up. The only information allowed is positive. It's efficient, it's modern, it's vi... View
chewy14 - 1 day ago
JC We don't need news reports, transport Canberra publish the patronage reports. BJ's figures are accurate. https://www.trans... View
bj_ACT - 1 day ago
Just for the record, the light rail business case for expected daily patronage was quite low in 2019 and we beat that in the... View
Property 6

Someonesmother - 1 day ago
Gee why does this not surprise me? Look who the developers are. 43 car parks in a completely congested street, using Canberra... View
News 5

Call-out culture is a phrase that seems to twig the ears of every far-left and far-right keyboard warrior out there...
News 25

The ACT Government has rejected the recommendation to widen the fire break between the park and neighbouring rural landholders as...
Opinion 12

The news this week was grim for anyone caught up in Canberra's brutal rental market, as rents continue to climb...
Property 6

@The_RiotACT @The_RiotACT
The government is promising a greener, safer and passenger friendly Woden Interchange, with plans lodged for the $35 million project https://t.co/diIRBUCOcX (53 minutes ago)

@The_RiotACT @The_RiotACT
The ACT Chief Health Officer has announced all COVID-19 travel restrictions placed on people from Victoria will be removed at midnight tonight https://t.co/wL1ccTOWym (2 hours ago)