What Aidan Sezer learnt from his time on the bench 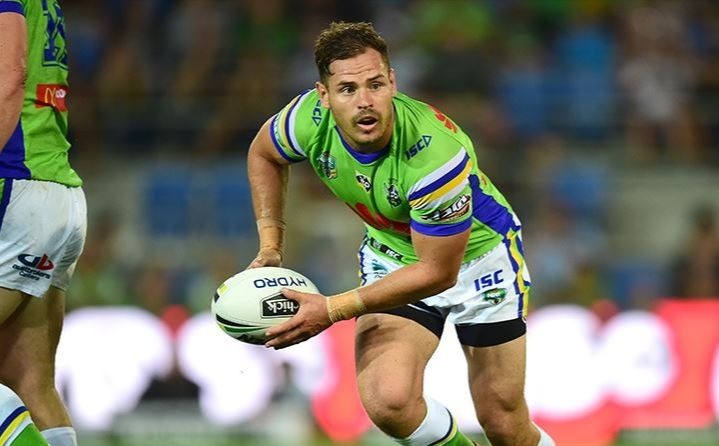 “It’s good to be back in the team and we’ll see how we go from there.” – Photo: Supplied by Canberra Raiders.

After coming off the bench against the Knights during the Raiders last home match, five-eighth Aidan Sezer is certain he doesn’t want to do it again.

“Being a professional footballer, you don’t want to play on the bench,” Sezer said at Wednesday’s press conference. “It’s something I’m not used to, I’ve never really come off the bench in my career and I don’t want to get used to it.”

“It’s good to be back in the team and we’ll see how we go from there.”

After enduring a pair of two-point defeats, the Raiders are aiming to finally secure their first win of the 2018 season when they take on the undefeated Warriors at GIO Stadium on Saturday afternoon.

The Green Machine will look to continue their dominant record against the Warriors in Canberra, winning 12 of the past 16 clashes at GIO Stadium.

As the Raiders prepare to face a confident Warriors side, who sit second on the ladder, Sezer felt that the Raiders had to fix a few “errors in judgement” if they wanted to come away with a win on Saturday afternoon.

“Definitely the reads, rash decisions on the edge, it affects the team and is affecting our result,” he said. “Yardage defence has been good, we’re controlling the ruck really well, but I just think as you saw on the weekend just a few errors in judgement in defence is letting us down.”

“On your goal line, if you make an error on the edge, it usually costs you in points.”

Joey Leilua was surprisingly named to start in the centres after sustaining an ankle injury last weekend against the Knights and will be given the opportunity to prove his fitness. Michael Oldfield has been named on an extended bench to cover Leilua.

Liam Knight could make his Raiders debut this weekend after he was named in the 17, with Charlie Gubb ruled out with a groin injury. Gubb will undergo treatment on his groin and will be reassessed weekly.

David Stephens - 3 hours ago
In the Heritage Guardians submission to the recent NCA consultation process, we said this about how the Memorial consults: "N... View
Stephen Saunders - 3 hours ago
Mr Anderson, it is laughable to quote a skewed “survey” of punters already visiting AWM. Ms Barnes, as ever, a puppet. Ga... View
Property 1

@The_RiotACT @The_RiotACT
Van Gogh has proven once again to be an unbeatable crowd-pleaser in Canberra. And some young local artists were even inspired to create their own Sunflower-inspired masterpieces https://t.co/pdFL3jtLXi (58 minutes ago)