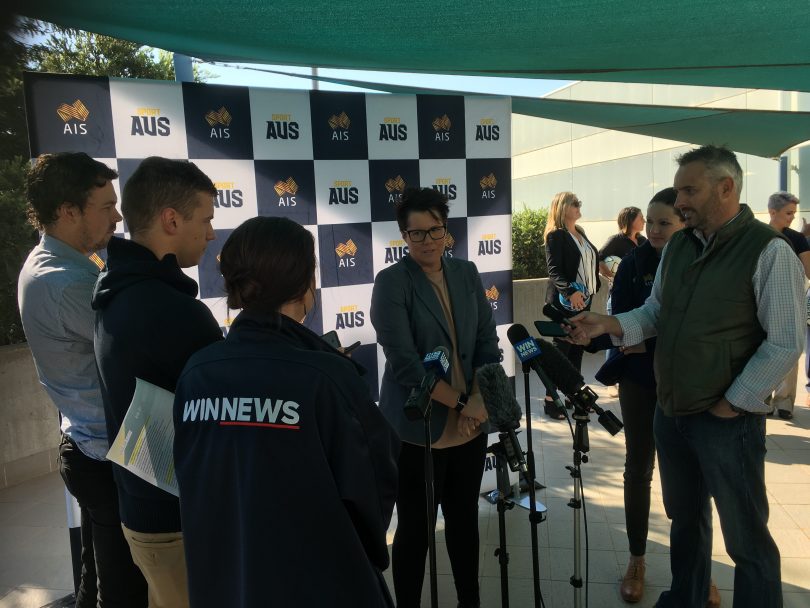 Bec Goddard in front of the media in Canberra. Photo: Tim Gavel.

I believe if Bec Goddard was a male sporting coach, she would be knocking back a plethora of offers from rival clubs.

Her record in coaching speaks for itself. She coached the Adelaide Crows to the premiership in the inaugural season in the AFLW in 2017, she was assistant coach at the Canberra Demons last year, a season where they made the finals in the NEAFL for the first time, and her role at the Canberra Capitals, contributing to the team winning the WNBL title last month for the first time in eight years. With the Capitals, she is credited with adding a physical advantage to their game.

Everything she touches in sport, it would appear, turns to gold. Yet the offers are far from forthcoming. Bec applied for the Gold Coast Women’s AFL 2020 coaching job, only to see it go to David Lake. There are now no women in head coaching roles in the AFLW.

Bec, it would appear has hit the glass ceiling, and may have to literally re-invent herself to return to the AFLW. She has decided to head back to the grassroots of Australian Football. Bec has approached AFL Canberra with a desire to coach Auskick, a game for kids aged five to eight years-of-age. The added kicker being that she wants to mentor young boys in this age group. Her reasoning? She is keen for young boys to become familiar with having a female coach.

I spoke to AFL Canberra about Bec’s desire to coach Auskick and the response has been very positive. Auskick is a growth area in the code with over 1,800 kids between the ages of five and eight in Canberra participating. The growth is particularly strong amongst girls.

Young women now see a pathway through to the AFLW. In the past, after Auskick, they had to play in the mixed competitions.

So why doesn’t the same pathway exist for female coaches?

This doesn’t just occur in AFL. Only nine per cent of Australian coaches involved at the Rio Olympics were women.

In seeking a reason behind this apparent anomaly, the arguments presented highlight how much work needs to be done to change perceptions.

One suggestion was that both male and female athletes respond better to male coaches. Another was that those making the decisions about coaches didn’t have confidence that women could do the job, or that women didn’t have the grounding in sport to be a successful coach.

Obviously all of the above makes no sense.

How do you know if a woman is going to be a successful coach when you don’t give them the chance in the first place? And even when they are given an opportunity, they tend to face far greater scrutiny than their male counterparts.

It’s almost as if the predominantly male administrators are waiting for female coaches to fail, rather than offering support and encouragement. Tracey Menzies’ experience in coaching Ian Thorpe to gold in 2004 is a case in point.

There is a growing belief, contrary to the thought patterns of male administrators, which suggests that female coaches provide a totally different perspective. Bec makes the point, “We’re spending a lot of money on technology to try and make our teams great, yet the answer is right in front of you. Women can provide a unique perspective, and that is the sporting edge.”

What sport requires is a collective point of view that female coaches can do the job just as well and in plenty of cases better than their male counterparts.

In many sports, it will require a cultural shift.

The crying shame is that Bec isn’t a full time coach – she has to fit coaching around her day job.