Why we need to invest in Canberra

This Budget has been framed by substantial Commonwealth cuts and the ACT Government has had to respond to the impacts on our economy and on our own finances. We have made the choice not to compound the pain already being felt by Canberrans after the Commonwealth’s cuts. 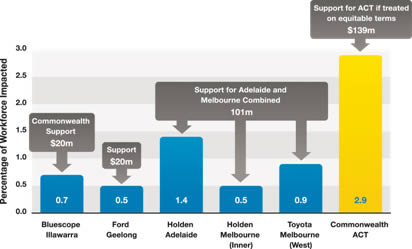 Unlike other regions in Australia that received significant support packages to help ease the blow of job losses, no such package has been forthcoming for Canberra. In fact, on Monday the Prime Minister made it clear to the Chief Minister that the ACT is on its own. 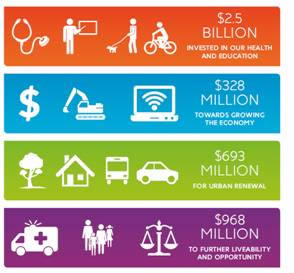 We have made the choice to deliver the $240 million in health funding that was cut by the Abbott Commonwealth Government. We cannot turn our hospital services on and off like a tap and we need to sustain the level of care needed for our people, and to grow services in keeping with our population.

The 2014-15 ACT Budget invests $1.061 billion in the ACT education system including more than $47 million for the construction of Coombs School and $9.2 million to ensure students have access to high quality digital technology in our schools.

Through the budget, the Government makes the choice to support our economy. Over the coming 12 months the Government will be working with the business and community to build a stronger, fairer and prosperous Canberra.

Lucy Jane - 50 minutes ago
4 day week for everyone but everyone gets a different day off. Will help immensely with traffic congestion and has been trial... View
Ronnie Adams - 5 hours ago
Helicopter 🚁 View
Julie Macklin - 24 hours ago
I cycled and rarely had to face the parking problems people complained about. When it rained I took the bus, even though I ha... View
Community 15

Acton - 2 hours ago
The Canberra lifestyle is fresh air, trees, birds, roos, mountain views, bush and lake walks, good roads, bike paths, kids, p... View
Jeff Smith - 4 hours ago
I think we are both concerned about the same bigger problems and to some degree on the same page. I certainly never want to s... View
Ian McLeod - 14 hours ago
Jeff Smith I see your point but I don't think planners expected the Brindabellas to become such a valuable resource for menta... View
Property 16

Malcolm Roxburgh - 5 hours ago
The government has to release more land not make it easier to raid your super. This only makes for more cashed up buyers and... View
assiduous - 15 hours ago
Low lending standards and inflated bonuses for originating mortgages based on ever rising values are core features of our ban... View
Pradeep Bishwakarma - 15 hours ago
Crazy market Shiva Sapkota! Only the RBA Can fix this View
News 1

HiddenDragon - 19 hours ago
Another case study of the incompetence and impracticality of this government. Consumed with the big picture, feel good, sound... View
Capital Retro - 1 day ago
Oh, the perils of virtue signaling. It would be hilarious (like an episode of Yes Minister) if it didn't mean this will cost... View
Opinion 1

Truck driver Brett James Hartley-Kennett thought he had been chatting with a 14-year-old girl called 'Amy'. He wasn't. According to court...
Opinion 88

When I was a child, my family went to church every Sunday. We would have been outsiders if we didn't....
Opinion 88

@The_RiotACT @The_RiotACT
More home sites are on the way in Ginninderry, with a DA lodged for Macnamara Stage 1 https://t.co/SKPYSyLgUQ (2 hours ago)