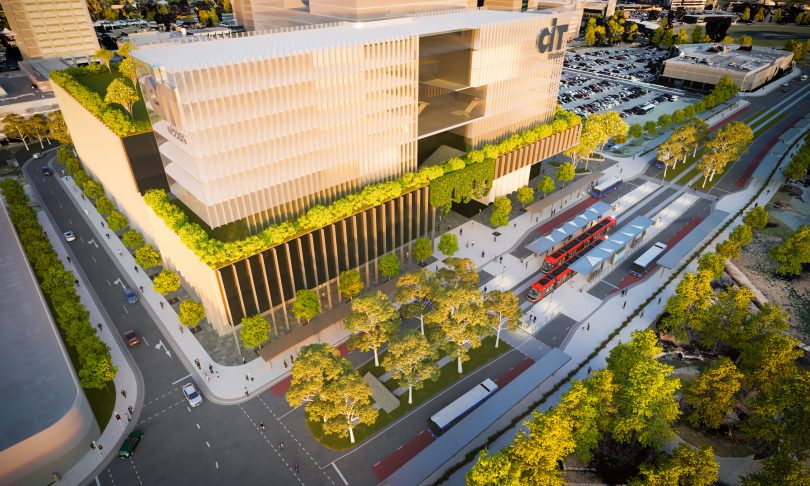 An aerial indicative illustration of the Woden CIT and interchange, including the light rail stop. Images: ACT Government.

The long-awaited east-west corridor through the Woden Town Centre looks set to become a reality in the combined CIT-public transport interchange project but doubts remain about how it will be achieved.

Woden Valley Community Council president Jenny Stewart says it will be a good thing if that’s what the government is planning to do because the east-west axis has not been given much attention in the past and the devil will be in the detail.

”At this point it’s hard to know how it will all work. We need to see more detailed plans,” she said. ”It’s a bit hard to see how they can ensure clear access to the town square from the interchange and the CIT.”

Minister for Tertiary Education and Transport Chris Steel says the $250-300 million project – up from the original estimate of $100-250 million – will respond to the outcomes of the Woden Town Centre master plan with a new east-west boulevard connecting the Town Square to the interchange on Callum Street.

The government has released new artist’s impressions of the project and a fly-through video to show how it might operate.

The indicative designs show a thoroughfare going beneath the CIT from Callum Street. Mr Steel is calling this boulevard Woden’s ‘new front door’.

Mr Steel is also promising extra green space in response to community feedback, including green roofs as part of the sustainable design brief

He says the building of the light rail station will future-proof the interchange as Stage 2 is built and it will service buses until the track is laid.

Dr Stewart welcomed plans to begin building the new interchange next year as the existing one isn’t very attractive but it was still unclear how the pieces will fit.

”We want to see where they want to put it and how it will work,” she said. 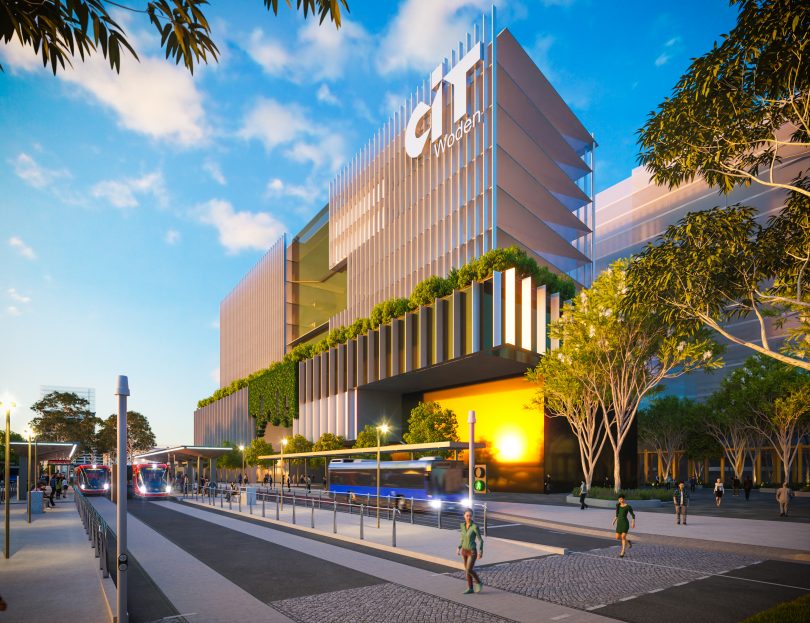 Another view of the project from Callum Street.

Mr Steel also says the CIT will have 70 car parks, and the government is reviewing parking needs in the Town Centre in light of new private developments and Westfield’s new restaurant precinct in Bradley Street where spaces have been lost.

The community council has never supported the selected site, overshadowed as it will be by Grand Central Towers and believed to be too small for an education campus.

But Mr Steel says the site on the current interchange and the old police station has many benefits, including being able to achieve two significant infrastructure projects at one time and act on the Master Plan.

”It will be quite disruptive but it will deliver a significant regeneration of the Town Centre over coming years,” he said.

”This project delivers a much better Woden for people to live, work and learn.”

The next step will be contracting architects to provide detailed designs. Work is expected to start on the interchange by mid-2021, and on CIT Woden in 2022. 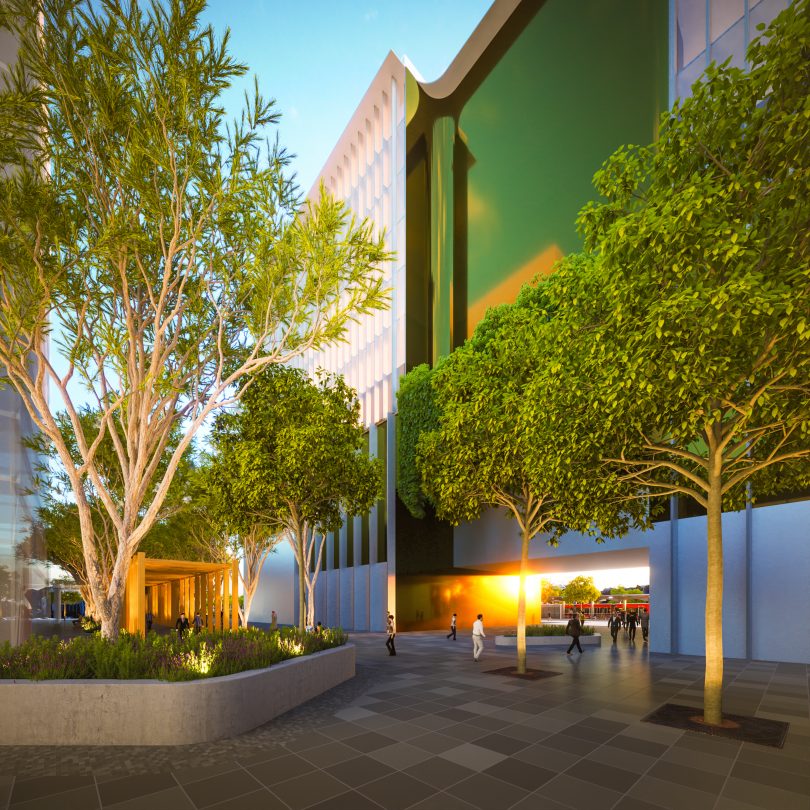 Dr Stewart says the community council will work to ensure there is adequate community access around the building as ”a lot of other people besides CIT [students and staff] will be using the interchange”.

In coming years thousands of new residents will call Woden home as major residential towers are completed, including Grand Central Towers and the A&A development by year’s end.

Geocon’s massive WOVA proposal in Launceston Street, Zapari’s plans for a 600-apartment mixed-use development on the corner of Brewer and Corinna Streets, and Melrose Drive, and Doma’s planned four-building development on Melrose and Corinna will continue to transform the Town Centre.

Anomalous policies
Chris Steel says the project will create a new front door to Woden, with a well-lit pedestrian boulevard connecting the interchange, CIT campus, the square and Westfield for more vibrant and welcoming town centre.
The boulevard is on the south side of Grand Central, in the shade, and the town square is zoned for 28 storey buildings so it will be in the shade. What exactly is welcoming about being on the south side of tall buildings in Canberra’s winter?
I am advocating to save the centre of Woden and keep the sun in the Town Square.

In addition, why is the policy objective to integrate with the bus interchange and achieve two significant infrastructure projects at one time? The CIT has the potential to be an anchor for the Town Centre and create a community hub with an arts centre and a community centre. Why aren’t we developing policy for great outcomes for the community to provide a sunny place that builds community and is welcoming, safe and inclusive.
Candidate for Murrumbidgee