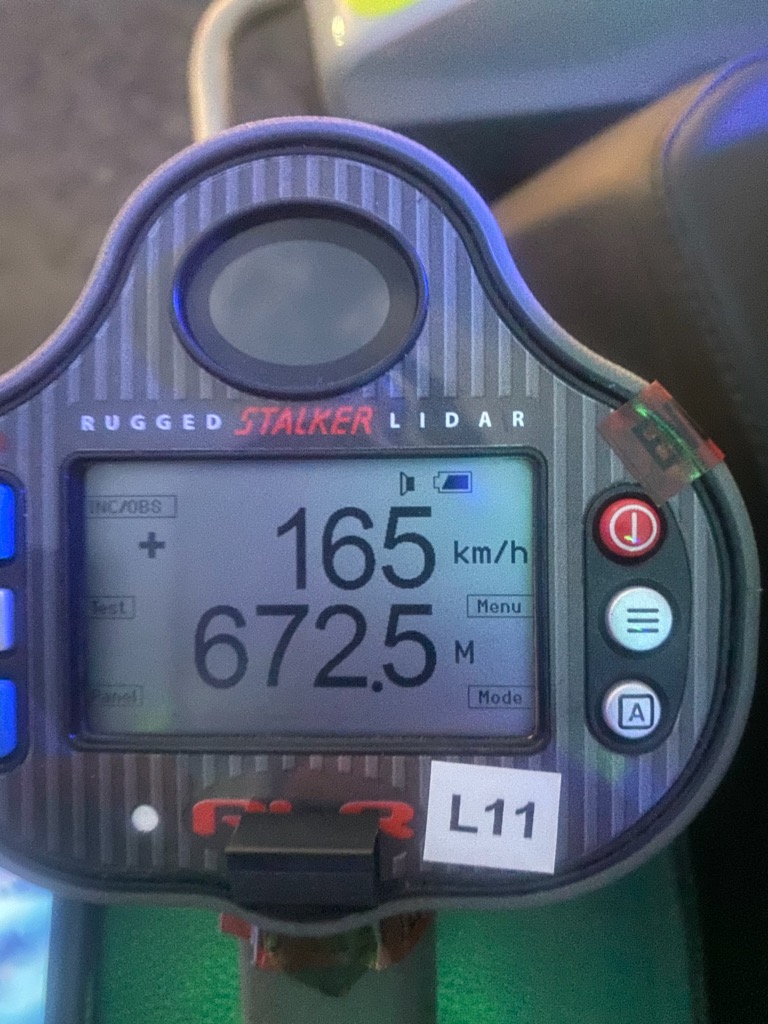 A 29-year-old man from Amaroo was detected doing 165 km/h in an 80 zone on Gungahlin Drive in Franklin on Thursday. Photo: Supplied

An unlicensed woman with drugs in her system has failed to stop after dangerous driving was noticed by police in Belconnen yesterday (3 November).

Shortly after, the 22-year-old Turner woman’s vehicle collided with a fence on Benjamin Way, Belconnen.

The woman was arrested at the scene and subsequently charged with offences including driving with a prescribed drug in oral fluid, failing to stop, driving without ever having held a licence, dangerous driving, using an unregistered and uninsured vehicle, and using a number plate issued to another vehicle.

Police will allege the woman was driving a vehicle with incorrect number plates attached and failed to stop when directed to in Luxton Street.

The woman will face eight charges at the ACT Magistrates Court.

This incident comes after three unrelated traffic incidents over the previous four days where motorists were detected speeding at more than double the posted speed limits.

On Thursday evening (31 October), a 29-year-old man from Amaroo was detected doing 165 km/h in an 80 zone on Gungahlin Drive in Franklin.

The driver was fined $1841 and will receive six demerit points.

A 17-year-old male provisional licence holder from Franklin was recorded speeding at more than 135 km/h in a 60 zone on Thursday morning. This incident occurred at the Belconnen Way and Springvale Drive intersection shortly after an accident scene had been cleared.

The 17-year old’s licence will be suspended and he was issued with a $1841 fine.

A second vehicle was also detected speeding along Belconnen Way at the same time. Police investigations to identify the driver of the vehicle are continuing.

Anyone with information about this incident is urged to contact Crime Stoppers on 1800 333 000, or via the Crime Stoppers ACT website quoting reference 6456112. Information can be provided anonymously.

Julie Nimmo - 48 minutes ago
I met Sue often. Always gracious and dignified. So very saddened when I heard that a 4x4 had killed her on the Com Av Bridge.... View
Louise Roberts - 4 hours ago
Sue was my daughters primary school teacher. My daughters favorite ever teacher. We still talk about today. Well deserved Sue... View
News 229

Dean Soccol - 55 minutes ago
Nathan Grieve in Queensland every time we get a fine we lose points. So if you are one of those that don’t care about the m... View
Nathan Grieve - 1 hour ago
Andrew Nelson not every offence comes with demerit points, so unfortunately that statement is incorrect View
Andrew Nelson - 2 hours ago
Nathan you’re forgetting what the points system is about View
Opinion 90

Chifley woman to face court on 12 charges including drug driving