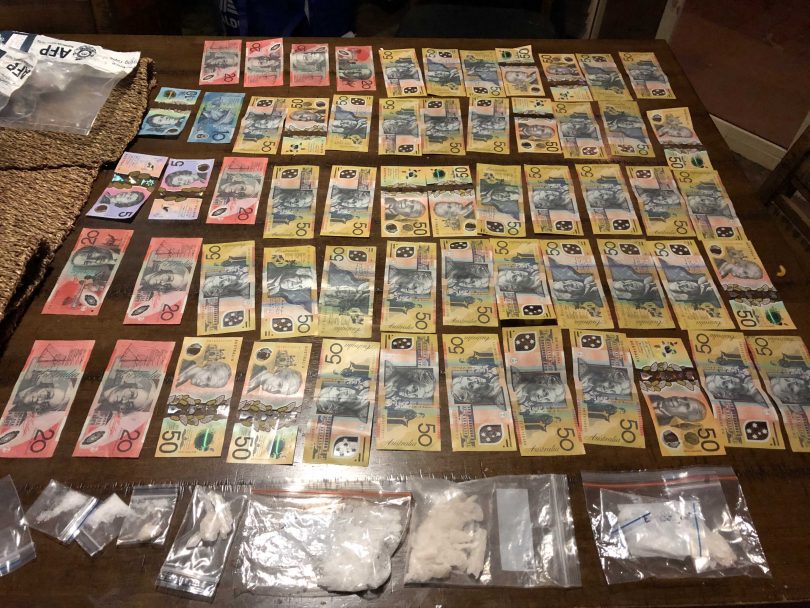 Cash and drugs seized by police following a search of a Ngunnawal home on Monday night. Photo: ACT Policing.

Police have arrested and charged a woman from Ngunnawal in an operation that has resulted in the seizure of approximately 90 grams of methylamphetamine (‘ice’) and more than $8000 in cash.

The 33-year-old woman is expected to appear in the ACT Magistrates Court today (31 March) where bail will be opposed.

The woman will face charges of trafficking a controlled drug, possession of property suspected to be the proceeds of crime, negligent driving, drug driving and breaching a good behaviour order.

The woman was involved in a traffic collision in Fraser on 29 February where a large amount of cash and methylamphetamine was discovered in a bag in her possession.

Investigations into the activities of the woman continued until last night when a vehicle stop of the woman in Dickson and an associated search of her Ngunnawal residence discovered further cash and methylamphetamine.

Where is the rest?

Don’t the AFP love their little “X” on a table photo opportunities.

Netting less than 3 k and a QP of whatever will definitely put a cramp on Criminal enterprise in the city.

I’m sure the two year suspended sentence the perpetrator will receive will stand as a stark reminder to people to not deal in illicit substances as well.