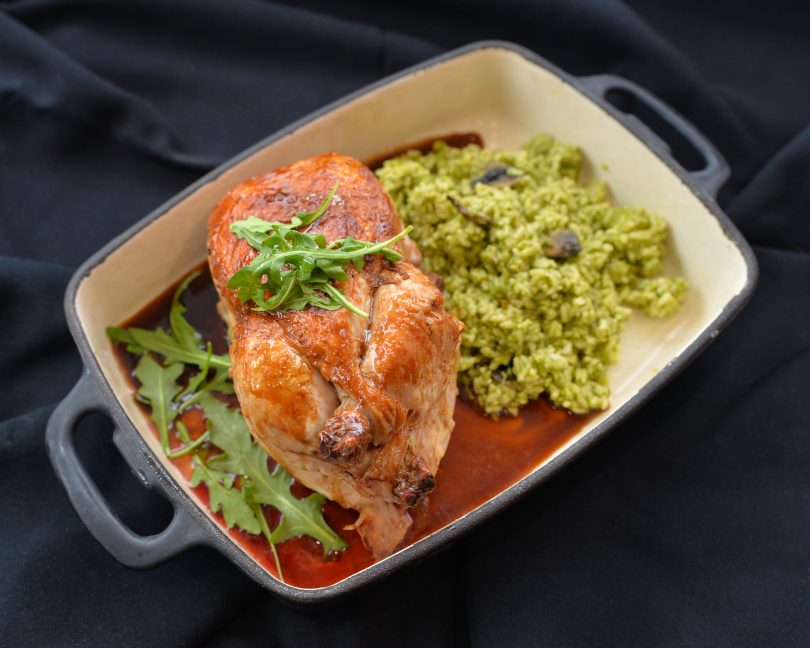 It may not be a formal record (if there even is such a thing), but it will probably get close.

Eastlake Group and Youngs Meat Poultry Smallgoods are partnering to host the ‘World’s Biggest Chook Raffle’ to raise funds to help the many firefighters on the frontline and all those affected by the South Coast fire disaster.

Youngs is a Queanbeyan-based supplier and has been serving the Canberra and Queanbeyan food industry for more than 20 years.

Over 120 chooks will be raffled at both Eastlake Gungahlin and Eastlake Calwell this Saturday night (28 December) and organisers say 100 per cent of the revenue raised will go to those affected by fires between Canberra and the South Coast.

“We all travel to the Coast, it’s our second home and while we can’t go down there, we need to let the businesses and people of the Coast know we are here to support them,” said Kylie Qiu, Youngs’ managing director.

“We wanted to work with Eastlake to see what we could do – this will be both great fun, and a great chance for Canberrans to help out.”

Youngs Chicken have donated the raffle prizes and Eastlake will be selling tickets on Saturday for the draw commencing at 7:00 pm.

The Eastlake Group say that this is the largest event of its kind they have ever been involved with. They’ve had fundraising tins on the bar at their clubs in Calwell and Gungahlin since the crisis began almost two months ago.

That’s already raised several thousand dollars for the firefighting effort, but they hope the massive chook raffle will raise some serious money.

“We’ve never done a raffle with this many prizes – we can’t wait, it will be such a fun night” said Louize Glenn, corporate affairs manager of the Eastlake Group. “Hopefully this will be a great kick to helping out our families on the South Coast.”

There are 120 prizes, so there is an excellent chance that plenty of people will be going home a winner, but both the clubs and Youngs say they hope the real prize will be the funds raised for the people affected by the fires.

Eastlake Gungahlin is at 51 Hinder Street, Gungahlin; Eastlake Calwell is at 1 Were Street, Calwell. 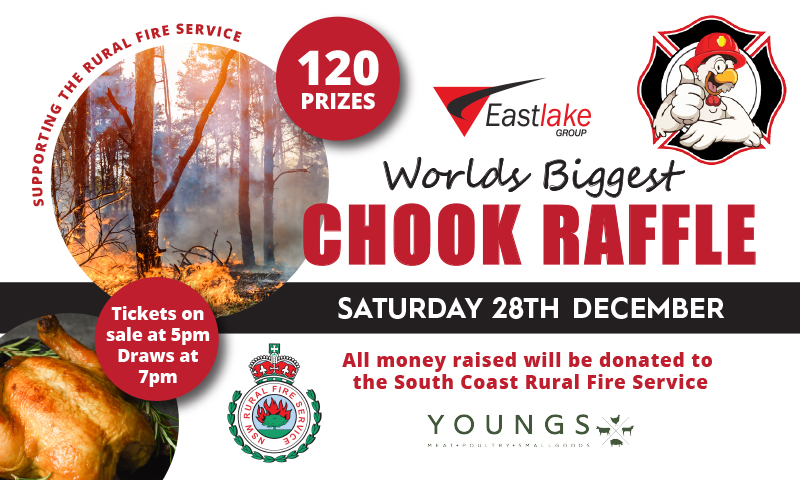 Jason Matthew or theres this instead of chinese. We can add another club card to our growing collection

Thanks for your support. We hope to raise as much as we can to support the RFS on the South Coast.

Capital Retro - 7 hours ago
Thanks to the COVID 19 pandemic, telecommuting is now well established and it will stay that way: https://theconversation.com... View
chewy14 - 9 hours ago
JC, The heavily redacted "business case" for the whole of stage 2 doesn't break even either so it doesn't really make much di... View
JC - 11 hours ago
Try 15,000 boardings per day prior to COVID. Though I doubt the extension will generate much extra traffic, but that’s not... View
News 71

JC - 8 hours ago
Yup. And if going to knock it down (Civix) and rebuild it may as well do it elsewhere and keep Civic with its Duby done open... View
JS9 - 19 hours ago
I think the Civic pool is probably a lost cause in terms of fixing it, without knocking it all down and starting again. View
Rob Chalmers - 1 day ago
So Gungahlin pool is to be repaired good. What about the Olympic pools at Civic or are these to be sold to be developed ? View
Community 6

HiddenDragon - 8 hours ago
"Could the Brindabella Ranges be incorporated into the ACT’s coat of arms,..." An image which combined the mountains and th... View
jwinston - 16 hours ago
So many more important things to spend money on - health, education and roads come to mind. View
News 58

Capital Retro - 9 hours ago
I've already pointed out the folly of people building in the forests which are known bushfire areas. It seems some academics... View
Community 1

ChrisinTurner - 12 hours ago
Remember when the ACT government acted to make it uneconomic to have a supermarket in Coombs? So much for walkable localities... View
News 2

Capital Retro - 15 hours ago
I don't think on-line sales are flourishing either given the now irregular sighting of the delivery vans in my neighbourhood. View
phillipbusinesscommunity - 18 hours ago
This is an interesting statistic, as many Small Businesses have noticed a drop in the volume of cash being spent in the local... View
News 10

keek - 17 hours ago
Not sure it is Governments that have painted them into a corner, more that they have been enabled to paint themselves into a... View
chewy14 - 19 hours ago
JS9, Perhaps universities could actually go back to being more about educating people rather than constantly trying to expand... View
JS9 - 19 hours ago
On the broader question of immigration, I get the view. But what suggestions do people have for making our university sector... View
News 3

bd84 - 18 hours ago
It’s a payment to assist with living expenses to while they find a job, and they also can earn more money before it reduces... View
keek - 19 hours ago
Unemployment benefits are not supposed to be a lifestyle choice. It is supposed to be assistance while you find another job.... View
chewy14 - 19 hours ago
Whilst the Jobseeker rate definitely needed to be increased advocates would do well to quit with the ridiculous ambit claims... View
News 6

jwinston - 1 day ago
If the trees on your property were Australian natives then you’ll be enjoying them a lot earlier than that - a few million... View
show more show less
*Results are based on activity within last 7 days

Police are investigating an incident in Page this morning (20 February, 2021) that has left one person dead and three...
Property 4

The second stage of the Liangis family's hotel and cinema development in Manuka has come under fire from the National...
News 11

RiotACT and About Regional readers have woken this morning to depopulated Facebook feeds as the social media giant makes good...
News 0

Coastal commuters will be among the first people to cross the new Batemans Bay Bridge over Clyde River from late...
Food & Wine 0

A flood of professionals taking up work in the national capital is putting the squeeze on the Canberra rental market,...
Opinion 12

The news this week was grim for anyone caught up in Canberra's brutal rental market, as rents continue to climb...
News 11

RiotACT and About Regional readers have woken this morning to depopulated Facebook feeds as the social media giant makes good...
News 10

Chief Minister Andrew Barr has floated the idea of the ACT receiving one flight of international students for every repatriation...
News 71

UPDATED 12:45 pm, 16 February: All the tiles, levelling screeds and coatings of the Gungahlin Pool will have to be...
News 9

The ACT Government has rejected the recommendation to widen the fire break between the park and neighbouring rural landholders as...
Community 6

@The_RiotACT @The_RiotACT
Would-be Eurovision star Montaigne joins the SummerSalt lineup set to take over Stage 88 this Saturday. Find all the details in our latest #GigGuide https://t.co/fGj8Wxbbyo (7 hours ago)

@The_RiotACT @The_RiotACT
Hot in the City: Two Before Ten in Tuggeranong is a busy café by day & does double duty at night when it becomes the Greenway Wine Bar https://t.co/GCCTCShILr (8 hours ago)

@The_RiotACT @The_RiotACT
Arts ACT has explained that the Belconnen Arts Centre received the majority of emergency arts funding due to unique circumstances related to COVID-19 and the delayed ACT budget https://t.co/ycUArhZhHE (10 hours ago)