Five multi-storey buildings rising from a podium and surrounding a plaza are planned for the former Macarthur House site in Lyneham in a massive $156 million project that will deliver an office block, a hospitality and shopping area, and 424 apartments.

Art Group has lodged two concurrent development applications for the Stewart Architecture designed Macarthur precinct project, for the basement and early works, and the other for above-ground elements.

The 11,000 sqm office block rises up to 11 levels fronting Macarthur Avenue and will be a Cross Laminated Timber structure, an innovative product as strong as reinforced concrete.

It steps down to the same level as the two six-level apartment blocks facing Wattle Street, and includes a roof terrace garden. 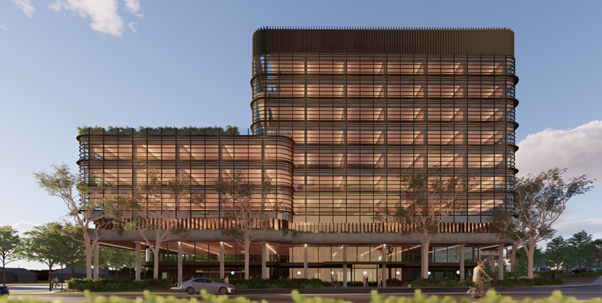 The double-height ground plane includes a lobby linking Macarthur Avenue to the plaza, a café opening to Northbourne Square and extensive end-of-trip facilities for the precinct.

The remaining two apartment blocks – one 14 levels and the other nine – face Northbourne Avenue.

The residential mix across the precinct will be 57 studio apartments, 206 one-bedroom, 133 two-bedroom and 28 three or more bedroom units.

Commercial and retail space will amount to 2698 sqm, and 500 sqm has been allocated for community use.

Community facilities will include a concierge, pool, wellness centre and gallery, as well as landscaped areas including large deciduous shade trees in the plaza.

Some trees will need to be removed from the site, but those along Northbourne Avenue will be retained.

The DA says a lower ground plane will be the primary public space linking Wattle Street to Northbourne Square, opening to Macarthur Plaza at the heart of the site, with direct access to public parking.

The Macarthur Market Place shopping centre will include a supermarket and specialty shops, while a community cinema, restaurants and bars are planned to support an “active place throughout the day and night”.

The plans show two car parks – one exterior retail car park with an access driveway to/from Northbourne Avenue at the northern end of the site, and one commercial and residential basement parking area with two access driveways to/from Wattle Street.

A total of 764 spaces will be provided, less than the 802 required.

The development has a bicycle parking requirement of 474 spaces for employees and residents, and 57 visitor spaces will be spread around the site close to entry points.

The DA‘s Traffic report says the proposed development is expected to generate 344 trips in the AM peak and 400 trips in the PM peak, and recommends adjustment to the traffic light timing at nearby intersections to avoid what it says will be adverse impacts.

The site is subject to the National Capital Plan City and Gateway Corridor requirements.

Another development which cries out for better public transport (light rail) to Belconnen as a priority: not everyone will want to go to Civic and there is a “chain of pearls” en route to Belconnen and westwards (Calvary Hospital, U of C, Belconnen Central, Bruce precinct, Kippax hub).

Only in Canberra. They might want to measure the block of land if they want to put that monstrosity on it, might have to knock down a few more buildings to fit.

Another CBR development with fewer car spaces than it’s supposed to have. How about “No. Fix that, and then we’ll talk about the rest of it.”

Traffic at that intersection is rediculous already what will it be like with an extra 424 residents coming and going?

Worse. Elon Musk’s Boring Company might be able to put a tunnel through from Macarthur Avenue to Limestone Avenue. Sydney has lots of tunnels to address the traffic issues and a wonderful opportunity to introduce Canberra’s first toll road.

They should upgrade the traffic lights at Macarther and Wattle/David streets. Too many idiots fail to give way to oncoming traffic

When it comes to uninspiring dull architecture, Canberra takes the cake. Looks like something I built out of Lego in 1985

I live nearby. Frankly it’s a reasonable proposal. The area is a major thoroughfare. Provided design is sensible, including sustainable and soundproof, then it has potential to be good for the area and homebuyers.

If this development is going to be connected to gas like other Art developments, then I hope others will also object – I will be.

This is an awesome project

Here is hoping for a coles local or woolies metro. As a neighbor to this development I welcome it and hope the public commercial/retail facilities come to full fruition!

Duncan Taylor – you may end up closer to shops than you thought?

Instead of the number of apartments, how about providing the actual size of the apartments (what are their sqm.) 400 odd dog boxes doesn’t cut it these days for the price asked.

Janet Ilchef I also do not like the look of it, but have to disagree with you on the location. I think it is in a pretty good location. It is within walking distance to Dickson and Civic. The Tram stop is across the road and that takes you to Gungahlin currently and eventually further. I ahve a feeling it may make some people a lot of money.

Linny Hawkins fair enough. It’s not a part of the city I’m in very often, but usually I’m heading elsewhere so it’s just a set of traffic lights for me. I wonder if there will be much parking space

Janet Ilchef no idea about parking but for the residents and their visitors, I hope so… I personally wouldnt live there but for a person who works in the city it might be perfect…

Janet Ilchef I think it’s a good idea for once. Need something on this side. But maybe instead of Woolworths or Coles, a Superbarn or a bigger IGA would be better, like what’s at Manuka

When is our 100% renewable energy government (which is a lie) going to start insisting new buildings are 5+ star energy rated? 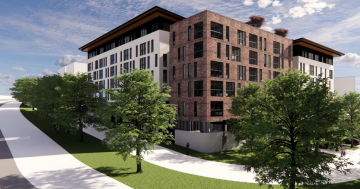