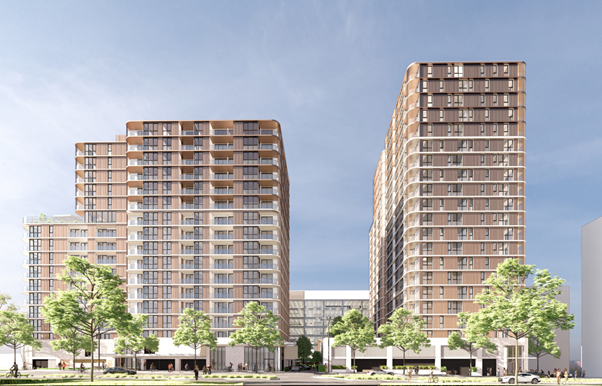 An artist’s impression of the development. Images: Stewart Architecture.

DOMA Group has lodged plans for the third of four buildings on its mixed-use precinct on the western edge of the Woden Town Centre, adding a further 207 apartments.

This building is sited on the southeast corner of the 11,212 square metre precinct bounded by Melrose Drive, Corinna Street, Furzer Street and Garth Close.

It will rise up to 20 storeys, the maximum allowed, and consist of two wings sitting on a podium and basement fronting Furzer Street, with a glazed and recessed lobby between.

The $48 million project also includes two ground-floor commercial tenancies and podium and basement parking for 282 vehicles. Twenty-one of the apartments will be adaptable.

The complex also has extensive landscaping and communal amenities at podium level, including deciduous trees, to complement the precinct’s central green space.

In fact, the precinct master plan allows for half the site to be landscaped including extensive deep-rooted planting.

A communal lounge and pool are also planned for level one of the northern wing.

The development application proposes zero setbacks on Corinna Street, saying this will support the 26-metre gap between the building and already approved Building Two on the corner of Corinna Street and Melrose Drive, as well as improved solar access to adjoining blocks, including the park to the south.

It says the proposal will mean minor overshadowing to part of the northern and western façade of the nearby A&A Development but more than three hours of sunshine is maintained at the winter solstice.

Parking is provided across five floors of the development – both basement levels, both upper and lower ground floors, and on the podium floor. 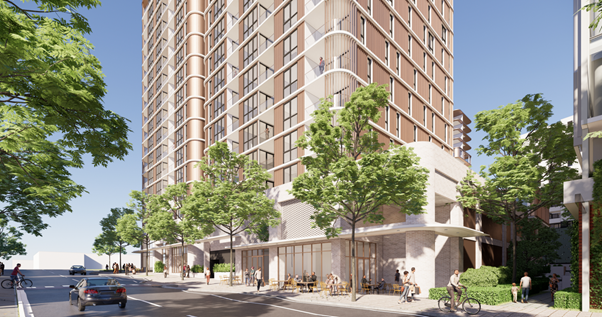 A street view of the development.

As well as the 282 car parking spaces, 218 bicycle spaces are planned plus nine for visitors above ground.

Access will be from a single driveway access off Corinna Street, which coincides with the southbound through lane of Corinna Street which should not be accessible from the site.

But the DA’s Traffic Report warns that given its near straight through alignment with the site driveway, drivers may enter this lane to shorten travel times. It recommends appropriate signage and adjustment of the median to prevent this.

The reports say the traffic impact will be minimal with an additional seven vehicles per hour or one extra vehicle on the network every 8.5 minutes.

When completed, the precinct will be home to three multi-unit structures and an office block and be part of the transformation of the western side of the Town centre that will also include Geocon’s four-tower WOVA development on the corner of Launceston and Melrose Streets and Zapari’s The Shard opposite Westfield.

They will inject thousands of new residents into that side of the Town Centre, along with retail and hospitality tenancies to service them.

Where is your building Matthew? The need for a car is different in each Town Centre, it depends on whether there are things available to walk in ride to. In the Woden town centre, culture and recreational facilities are limited and people use their cars to get to them.

Its ugly, a six year old could design something better over 200 boxes and twenty stories high will mean it will be visable from everywhere in Canberra. Let’s forget the Griffin’s plan for canberra as quickly as possible. It will have only 280 car space on 5 levels with only one driveway entrance, want a nightmare. It will be overshadowing not only the adjoining building but the whole street scape as it has no set back. As I said another ugly monster. Thanks to our current planners.

Ugly? Tbh, the design looks quite nice. As for the only having 280 car spaces, not everyone uses their space. I live in a 17 story building, and spaces in my building constantly get rented out. I guess one of the benefits of living in such a development, is that you are less likely to need a car.

So, at last the bicycle lanes might get some use. I don’t suppose the ACT govern-munt sought payment from DOMA for preparing the whole of Woden for these developments. As a nearby suburbanite, development of Woden, like the development of Civic, is all rather pretty but reduces my amenity and increases teh cost of me doing business there. The government is, like the developers, climbing the Ponzi property ladder.