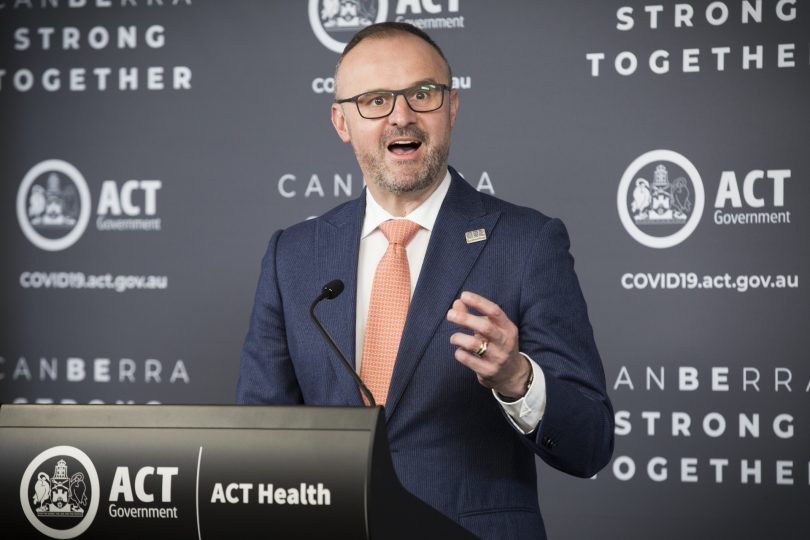 As COVID-19 lockdown restrictions are eased in Step One, 4,000 people will return to work in Canberra. Federal Treasury estimates suggest this will inject $60 million a month into the territory’s economy.

However, if restrictions were to be re-imposed, the ACT could suffer a $100 million per week hit to its economy, Treasurer Josh Frydenberg said as he released a forecast that Australia’s gross domestic product (GDP) could decline by as much as 10 per cent in the June quarter.

Canberra’s large public sector will help the Territory weather the worst of Australia’s economic storm and positions the ACT as one of the least affected jurisdictions in Australia.

The ACT’s gross state product (GSP) is increasing in some sectors because of the role both the federal and state public service sectors are playing during the pandemic, Chief Minister Andrew Barr said.

“The [drop in GSP] will be less than the rest of the nation because of the nature of our economy. Some areas of ACT GSP are actually growing rapidly – those in the public sector – as a result of the increase in activity,” he said.

“Services Australia, for example, needing to get through 600,000 applications they received for JobKeeper and JobSeeker, that sort of output that the public sector is delivering at the moment will partially offset some of the decrease in output you will see in hospitality, fitness and recreation.

“Public administration is about a quarter of the ACT’s GSP, that share will, in fact, increase over this period because of the decline of other areas.”.

As spending has collapsed across Australia due to lockdowns, total GST receipts – which are the ACT Government’s single biggest revenue source – are also expected to fall significantly. Mr Barr, who is also the Treasurer, said the total impact to the bottom line will not be known until he delivers the budget in October.

“The data to the end of the March quarter was that our revenues, our territory-owned source revenues, were down 4 per cent. That does not take into account where the GST will end up,” he said.

“We will receive less revenue across most of our revenue lines, one of the few that had an increase was revenue associated with online gambling.

“We are putting $350 million of stimulus in over a 10-week period so that is going to impact on the territory’s bottom line. Whether it becomes an all-time record or not I do not know yet.

“Every state and territory budget is going to be under pressure for the foreseeable future.”

Capital Retro - 6 hours ago
Origin are giving 0.17c per kWh on residential solar feed in some NSW regions. If I had 8 solar systems I think I would be cl... View
Capital Retro - 11 hours ago
Organics and renewables are all part of the manufactured "green-think" idealism. Some of these people even put nitrogen in th... View
John Giacon - 11 hours ago
Hi. While ACT prices are rising, they are still cheaper than NSW - though I found it hard to find clear figures on actual pri... View
News 16

@the_riotact @The_RiotACT
Recent rainfall has #LakeGeorge looking pretty full, but is it returning to its former glory? An expert from the ANU believes another wet year in 2022 and we could see water lapping the #FederalHighway like in the 1990s https://t.co/R1TWago0qJ (27 minutes ago)