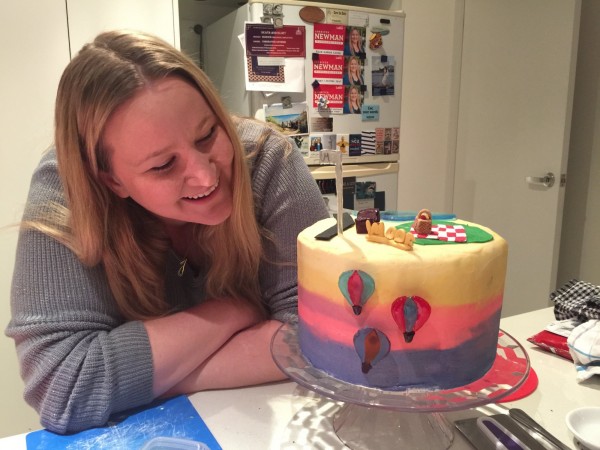 We’re hesitant to announce a winner of our candidate challenge with seven more entries to publish before election day, but you have to admit, Jennifer Newman’s chocolate balloons cake is going to be hard to beat in the Canberra vision/cake decorating stakes.

Chifley-based Ms Newman, who is running for Labor in the seat of Murrumbidgee in Saturday’s election, baked a total of seven cakes in mid-September before she was satisfied she had three that were good enough to lay one on top of the other and coat in butter-cream for her entry. She devoted her last rest day before switching up a gear to full-time campaigning to this task for us.

Not that she wasn’t campaigning before that. The young lawyer has used up all her long service leave and annual leave in a bid to win a seat. She went part-time at work mid-year, then decided to quit work altogether at the end of August.

“This is all-consuming,” Ms Newman says.

“It’s completely taken over our lives. For now, this is all we do.” 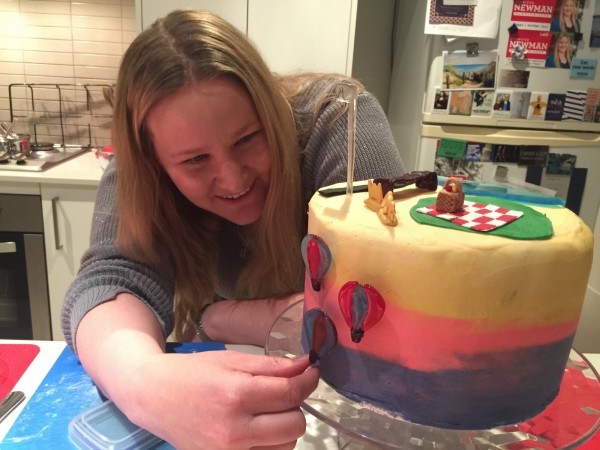 “I do regular stalls at Chifley and Waramanga and Garran shops, just to make sure I’m meeting people who maybe don’t make it into the town centre that often,” she says.

There is also door-knocking every day, because this is the best way to reach everybody, particularly as some voters prefer not to engage publicly with a politician outside their workplace or supermarket even though they may privately be a supporter.

All the walking has its benefits.

“I’m going to need new runners after this campaign, though. Aside from being well-used, they’re fairly water-logged. We’ve had a few rainy days, which doesn’t stop us.”

Ms Newman’s involvement in politics has its roots in her father’s political activism. She remembers Paul Keating corflutes sitting around the family home at Yenda.

“I used to sit at the kitchen table and copy them, and put them on the telegraph pole outside our house,” she says.

“Dad’s always been really vocal. We didn’t do a lot of politics around the dinner table, because mum was a shift-worker and dad was a water bailiff who worked whenever the farmers needed him, but we always understood the importance of being involved.”

When Ms Newman was a teenager, her mother injured her back and was unable to work.

“You don’t realise, you assume that you’re healthy and capable, and my parents worked really hard, and then one day my mum couldn’t get out of bed.

“She was in hospital in Albury and needed surgery, and I guess that really shaped the direction that I took in life, because no one expects it to be them.”

Such situations are what government is there for, she says.

“There’s an interest for the community for making sure that these people are taken care of.” 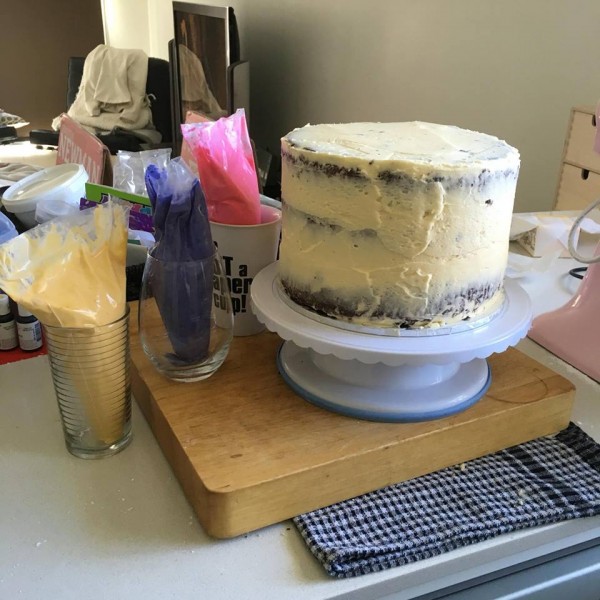 Having completed her undergraduate law degree at University of Canberra and a Masters in law at the ANU in 2013, the young solicitor recently left Blumers Personal Injury Lawyers after 10 years.

“I’m really backing myself for this,” she says jokingly, before explaining the thought process behind her decision which will lead to a change of direction whether she is elected or not.

“I’d been there ten years, and ten years of personal injury litigation, which involves injured people who aren’t at the strongest moment in their lives, and they really need someone who is absolutely on the ball, completely committed to the case and seeing it through and being a support person, it’s draining work,” Ms Newman says.

“So, I loved it for the ten years that I did it. It was phenomenally satisfying and rewarding, and I got to achieve outcomes for people for people who really needed them.”

It was during the process of handing files over to colleagues ahead of her planned temporary departure to focus on the campaign that she realised the time was right to make a change. She likes the idea of going into policy and seeing law from the other side, from its inception. 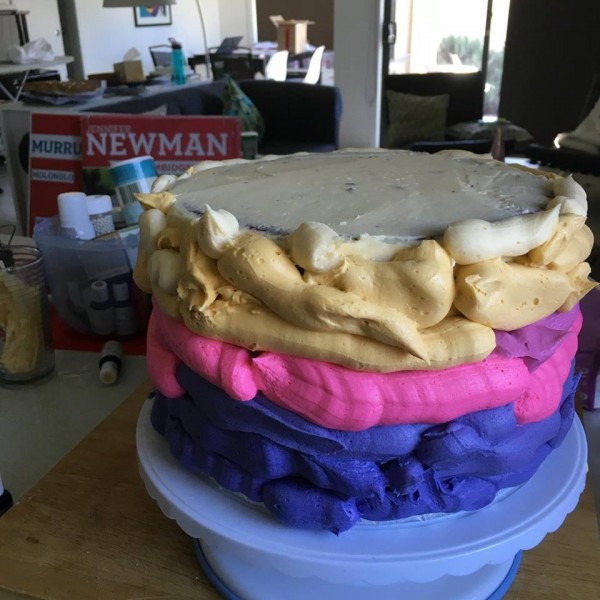 Ms Newman serves on the Board of the Domestic Violence Crisis Centre and volunteers weekly for Barnardos as a kids friend, with a young Kambah family. The community-minded young woman also volunteers with SIDS & KIDS, Menslink and at the National Folk Festival.

She has been involved in Labor since finishing her studies seven years ago, initially helping candidates she admires with their own campaigns, Federal Member for Eden-Monaro Mike Kelly and Brindabella candidate Joy Burch among them.

“Those people that I find really, really inspiring … Joy particularly, she’s such an on the ground person.”

The next step was stepping up herself.

“Progress is not a spectator sport,” she says.

“If you want to see change, you have to put your hand up and be in the room that’s making decisions that will continue to improve our city.”

Ms Newman is ambitious, as you have to be to win pre-selection for Labor in the ACT.

“Particularly in Labor, we do a really rigorous, democratic pre-selection,” Ms Newman says.

“Everyone who’s a candidate really, really wanted to be a candidate and fought hard for the opportunity.”

She came in fourth during pre-selection, ahead of Brendan Long. She notes that she got there without the support of a union or affirmative action.

“I was just someone in a sub-branch who put up my hand and said I thought I’d do alright at this,” she says.

“My sub-branch [Woden, where she had been president for two years] backed me in.

“I’m acutely aware of the opportunity I’ve got … there’s a group of people in Woden and Western Creek who backed me to do this ahead of anyone else.”

Given only two or three of the five Labor candidates are likely to get up in each seat, the battle between candidates on the same side is a reality.

“It reminds me of litigation in some ways,” Ms Newman says.

“Yes, you’re all trying to get yourselves elected, and it’d be good if your mate got elected, if you had to choose, you’d choose yourself, but at the end of the day, you’re all working to a common cause, you’re working within the same system.”

“It’s competitive, sure, but the end goal is the same: Labor government.”

As for how her own campaign is tracking, she says it’s hard to know.

“We had a plan at the start of this, we’re exactly where we wanted to be, whether or not that turns out to be enough to get me through, we probably won’t know till ten days after the 15th.”

“I think this is going to be a long count.”

The cake is based on Taste’s super easy chocolate cake. 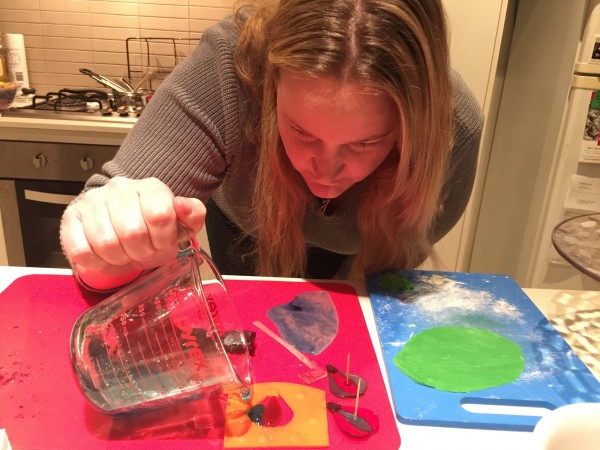 The icing is traditional Australian Women’s Weekly butter cream icing tinted using gel colours. The sugar glass of the balloons is created using isomalt, and the picnic blanket, bike path and woof statue are made with fondant. 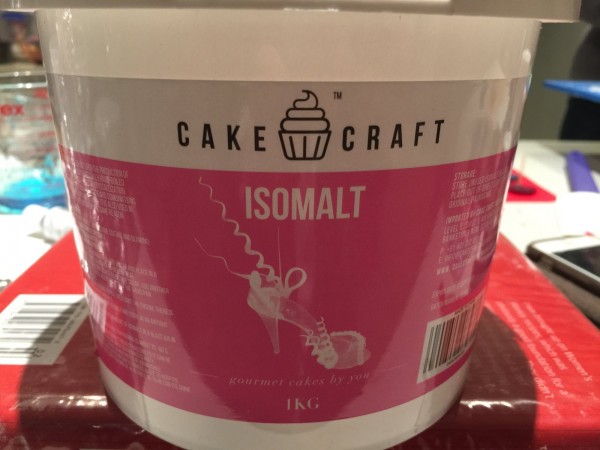 Colette Robinson - 44 minutes ago
As both a pedestrian and cyclist on shared paths, I am so sick of the arrogance, double standards and behaviour of certain cy... View
Peter Major - 44 minutes ago
get then off the road would be progress View
Aleksandar Vujić - 3 hours ago
Anthony Olivera gives cyclists somewhere to ride so they don't share the footpath with people, wont give motoring enthusiasts... View
News 1

@The_RiotACT @The_RiotACT
Multicultural Eats: Where to find the best Indonesian food in Canberra https://t.co/v5lPRYRs5P (1 hour ago)

@The_RiotACT @The_RiotACT
ADF veterans, first responders and emergency services are invited to lunch at Siren Bar on Australia Day by the APPVA and Effective People https://t.co/8SSUsQUmhu (5 hours ago)