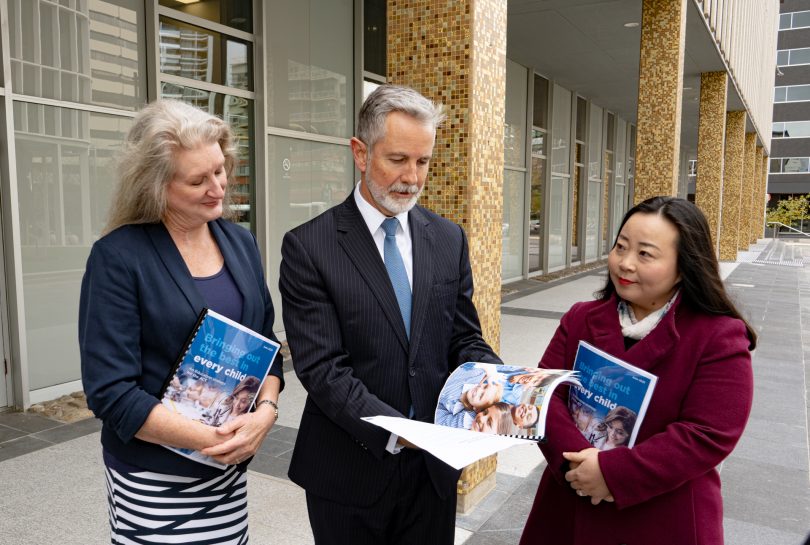 The Canberra Liberals’ new Education Strategy will resonate with the many Canberra parents who have growing misgivings about the direction of ACT Government schools.

It covers many of the sore points and suspicions held by parents that all is not well despite the efforts of teachers, principals and their school communities, and calls for a review of the system.

The Liberals argue it isn’t a matter of money. In fact, school performance seems to be slipping despite adequate funding and the relatively high incomes of most ACT families.

They point to several studies – from the Auditor-General through to academics – that NAPLAN scores, when adjusted for socioeconomic status, show a decline in performance.

While careful not to malign teachers, the Liberals point to low university entrance scores for education degrees and training that leaves them ill-equipped for getting results on the classroom floor.

They also say it’s time to revoke the autonomy that was supposed to allow schools to respond better to their local community but has created a collection of individual, unequal schools rather than a government system that gives confidence to parents no matter where they live.

One of the key philosophical thrusts of the ACT system – the idea of child agency through inquiry-based learning – is blamed for some children missing out on important literacy and numeracy skills early in their school years.

The academic who crafted the Strategy, Dr Karen Macpherson, concludes that inquiry-based learning may be fine for older, more mature children, but it can leave younger students all at sea, as can expecting them to make decisions about their own learning and even the open plan environment of many modern classrooms.

Much of the Strategy’s language would not be out of place in the Directorate’s own documents, but the Liberals have highlighted enough to support its call for an overhaul of the system and a recalibration to a more uniform governance of schools and a more instruction-based, direct teaching model, at least in the early years.

It could be seen as part of a growing backlash against the pedagogical reforms that started in the 1970s, the reading wars and, more recently, the row over how to teach mathematics, including basic skills such as times tables.

No one argues that schools should revert to the authoritarian regimes of the 1960s and the stultifying environments that hindered and even discouraged the development of critical thinking, but the Liberals have hit on some significant issues that many parents recognise.

Teaching reading without phonics is folly, kids do need to learn basic maths processes repetitively to retain them and calculators undermine that, sequential learning is crucial because a missed step means the chain of understanding and knowledge is broken, and subject matter needs to be age-appropriate.

READ ALSO: Are landowners hogging too much space in Canberra?

Many parents will relate to the experience of primary school assignments way beyond the ken of children who end up relying on their parents’ research skills, of children who are happy to sit on the computer clicking their way through multiple choice maths questions or down some other rabbit hole but getting nowhere, and who are clever enough to bluff their way through class until it is too late.

Some Catholic schools in the region have already changed tack after discovering that some children were left behind.

The headlines lend themselves to the ‘back to basics’ label, but that reeks of a nostalgic view of those golden years that for many were pretty grey.

That is the ‘vibe’ Education Minister Yvette Berry is resisting in her staunch defence of teachers and the Directorate, but beyond the rhetoric, she needs to take the issues the Liberals have raised seriously because they are exactly what parents are thinking and their children experiencing.

Politically secure for now, Labor will be doing Canberra families and eventually its own re-election prospects a disservice if it continues to ignore the evidence.

I went to a public school, what a shambles. Sent my son to a private school, and it was the best thing that I could have ever done for him

Spot on. It’s about time our children gets a better deal and time for a better learning system to equip our kids with skills that are necessary for the 21 century job market.

Carl Ostermann - 34 minutes ago
In the nineties, it was adventurous gnomes sending their owners... postcards from all over the world View
News 30

Barbara Boswell - 1 hour ago
Definitely hope so. Love V8s.... View
Dale Brittain - 1 hour ago
Choco Munday i experienced them first hand. I understand what you are saying View
Choco Munday - 2 hours ago
Um....no. The green lobbyists had the ear of government then, and they will oppose this now, even more fervently. The inner c... View
News 33