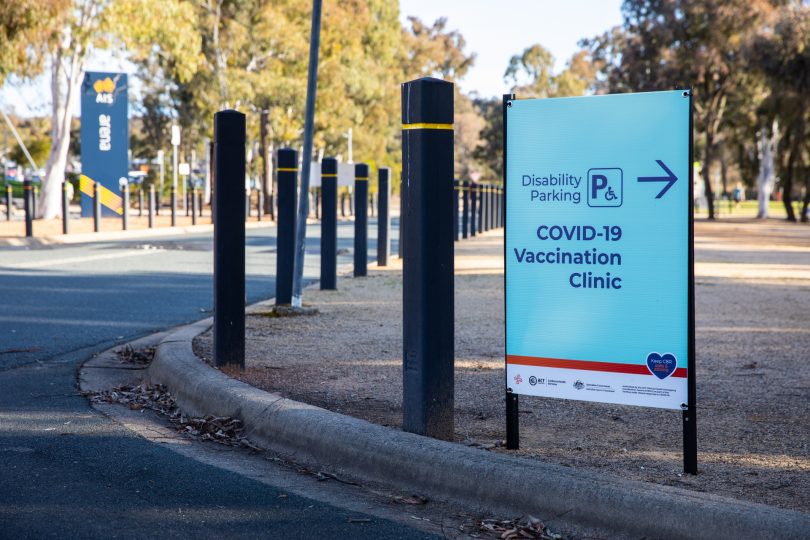 More than 90 per cent of Canberrans aged 12 and over have now had their double dose. Photo: Michelle Kroll.

The ACT today became the first jurisdiction in the country to achieve a 90 per cent full vaccination rate, prompting some changes to the rules for close and casual contacts.

Chief Minister Andrew Barr today expressed his pleasure at seeing the ACT cross the 90 per cent threshold for the population aged 12 and above, noting this put Canberra and Canberrans in a strong position as the nation opens up.

Speaking at an earlier press briefing, Mr Barr said discussions and work with the Commonwealth were underway for a booster shot program, with Canberrans who received a first shot more than six months ago eligible for another dose shortly.

The Chief Minister said the first stage of the reopening had been extremely successful, and while no changes had been made for this weekend’s easing of restrictions, he and other officials will consider bringing forward some of November’s changes. 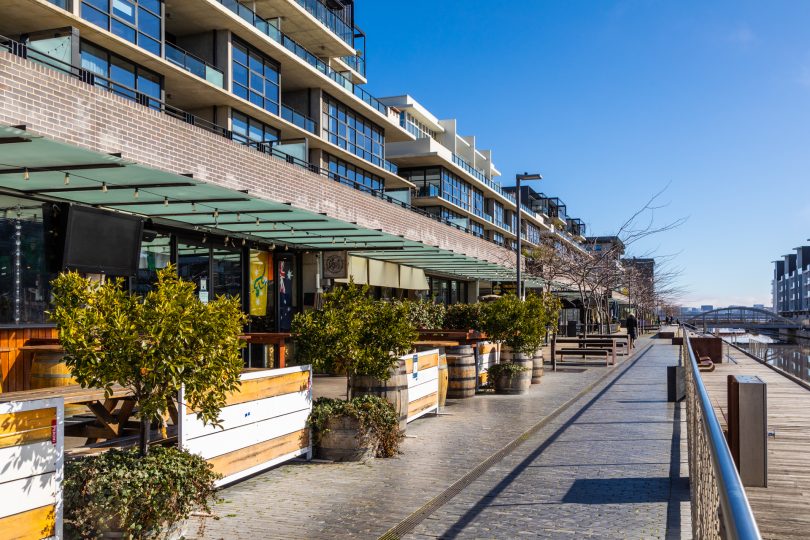 Face masks will also no longer be required outdoors from this Friday.

“The ACT can now take the next steps forward with confidence.”

Next Monday (1 November), more changes will come into effect. These include the already-signalled removal of the COVID-affected area declaration for Victoria and NSW – allowing free travel between the jurisdictions.

From then on, travel restrictions will be managed by the ACT identifying high-risk areas within larger jurisdictions. Mr Barr said these could change but were unlikely to be a large number.

The Chief Minister said that travellers from these high-risk areas would be differentiated based on their vaccination status, with vaccinated people granted an automatic exemption.

“Unvaccinated people will only be allowed to travel for essential reasons,” he said.

It’s not yet clear which areas will be identified as high-risk.

Some testing, stay-at-home or quarantine requirements could also be imposed and exemptions will be considered on a case-by-case basis for those unvaccinated people.

Children under 12 who are not currently eligible for vaccination will only be subject to the same requirements as their parents or carers, Mr Barr confirmed.

All students will also go back to school next Monday (1 November).

From 8:00 am on Friday, 29 October, health facilities in the ACT will move to allow one visitor per patient per day.

She noted that while this was still a strict policy, it would come as a relief to patients and that compassionate exemptions to this advice will be determined on an individual basis, and while these visitors don’t have to be vaccinated, Ms Stephen-Smith said it was highly recommended.

“All COVID-safe principles and behaviours will continue to apply for all visitors to healthcare facilities, so please do not come and visit a healthcare facility if you yourself are unwell,” Ms Stephen-Smith said.

Further changes to the Territory’s contact tracing system will also come into effect from Monday, 1 November.

Chief Health Officer Dr Kerryn Coleman said there will no longer be a quarantine requirement for casual contacts from this day forwards.

However, casual contacts will still need to complete a declaration form and isolate until a negative test is received.

“You will need another precautionary test six days later or six days after the exposure, but you won’t need to do anything special in that week, and you can carry on your day-to-day activities,” Dr Coleman said.

The quarantine requirements for fully vaccinated close contacts will also be relaxed, with quarantine only required for seven days.

“We are asking you to take some precautions for the second seven days, and these will be available on the ACT’s COVID-19 website.”

Dr Coleman said those who were not fully vaccinated would still be required to quarantine for 14 days.

The Chief Health Officer also continued to urge anyone with even the mildest of COVID-19 symptoms to get tested, once again expressing her concern about the length of time some positive cases are active in the community.

Despite low testing numbers in the past week, Dr Coleman was unwilling to say whether she thought rapid antigen tests – which will soon be available to purchase in major supermarket chains from next month – will feature heavily in the ACT’s public health response moving forward.

“When we have low community transmission, the risk with rapid antigen testing is that we might miss cases,” she said.

It’s likely more information will be provided as the Commonwealth and state and territory governments decide what role the tests should play.

Likewise, there is still a degree of uncertainty about what will happen if a positive case in a school community is recorded; the hope is that schools can remain open as much as possible, the Chief Health Officer said.

Boosters??? When is this going to open up to everyone who is at the 6 month and moving forward?