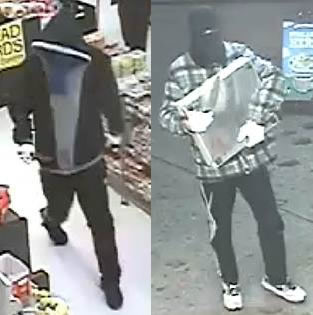 ACT Policing is seeking to identify two men following the aggravated robbery of a supermarket in Isabella Plains on Sunday night (June, 15).

About 7.20pm, two males entered the IGA Supermarket on Ellerston Avenue, Isabella Plains, carrying large kitchen knives. Both men moved behind the counter and removed draws from two cash registers, containing cash. The men then fled the store on foot.

One male is described as Caucasian in appearance and approximately 6’3” (190 cm) tall. He was wearing a black hooded jumper, black pants with white stripes down the sides, white gloves, dark shoes and his face was covered with a blue piece of material. He appeared to be pigeon-toed as he walked.

The second male was described as Caucasian in appearance and approximately 5’9” (175 cm) tall, wearing a vertically and horizontally striped long sleeve shirt, white gloves, a dark balaclava over his head, black pants with white stripes down the sides and white and black shoes.

Police are urging anyone who may have witnessed the incident to contact Crime Stoppers on 1800 333 000, or via www.act.crimestoppers.com.au. Information can be provided anonymously.

Colin Butcher - 5 minutes ago
Freeze a jolly good fellow. View
Juliana Vallejera - 33 minutes ago
I defrosted a chicken the other day. Sadly, upon defrosting it did not regain the ability to cluck or lay eggs. 😥 View
Lee Hughes - 1 hour ago
Jason Good Great investment! Imagine thawing out these two spuds in 2000 years expecting to find a Hemsworth. Ultimate time c... View
News 10

Rowan Hartcher - 14 hours ago
Alan Hopkins like wise View
Peter Quinn - 15 hours ago
So when can we celebrate colonisation????. Whatever day is nominated it will always be contested View
Alan Hopkins - 15 hours ago
its not that hard to change the day. just do it... View
Opinion 24

Bradley Heanes - 17 hours ago
Didn't the defence department already appologise for this? (Even though they were assisting the RFS at the time) Didn't they... View
franky22 - 19 hours ago
Why can't the ADF simply state that they made a mistake. View
News 21

Julie Macklin - 21 hours ago
Mark Katalinic Likewise why not use the roads for car racing? No, silly suggestion, as is yours. View
show more show less
*Results are based on activity within last 7 days

A Belconnen GP surgery was forced into lockdown yesterday (21 January) over concerns that a patient had recently been to...
Community 23

This week it's Australia Day, and there are some great events on around Lake Burley Griffin as part of the...
Breaking 0

Who would have thought that Canberra's Nick Kyrgios would morph from tennis brat and national embarrassment to statesman of the...
Community 23

@The_RiotACT @The_RiotACT
This week’s newsletter covers everything from a sumptuous Lebanese breakfast spread to algae in Canberra’s waterways to lively discussion around Australia Day https://t.co/hyR7zinwv6 (11 hours ago)

@The_RiotACT @The_RiotACT
Red & purple are the new black according to a group called the Red Hatters who provide encouragement + empowerment to women in Canberra https://t.co/nuHKJ26rGA (12 hours ago)