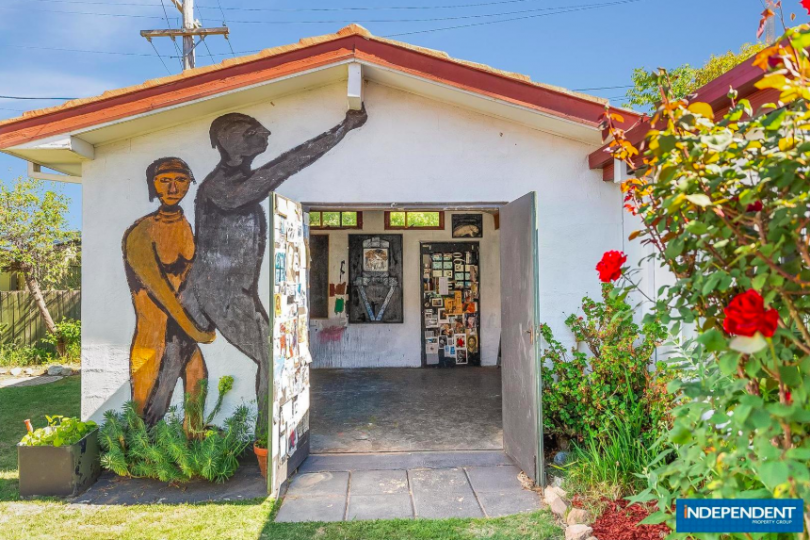 George Foxhill’s art studio at the back of the property is still intact. The home goes to auction on Wednesday 21 November. Photos: Supplied.

If you’re an Australian art fanatic, here’s your chance to own a piece of history. The Dickson property once called home by long-time Canberra resident and artist George Foxhill is on the market for the first time in over 60 years.

George Foxhill, who has been described as “one of Australia’s most accomplished and sophisticated expressionist artists,” lived at 16 Lowrie Street in Dickson from the 1950s until his death in 2011. He enjoyed a high profile locally and in Europe – with his works exhibited across Australia, in his native Austria, and in Germany. 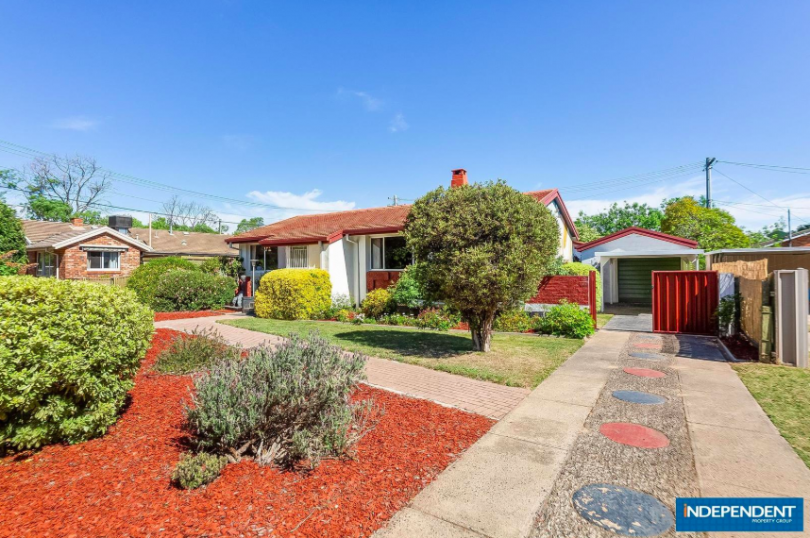 Don’t let the exterior fool you. This is a home with an interior that oozes vibrancy and creativity.

While the outside may look like your run-of-the-mill inner north property, the interior of this three-bedroom, one-bathroom home is anything but bland. There’s Foxhill’s art studio in the backyard, for one. The property listing describes the studio as “filled with character and warmth reminiscent of another time.” That’s a much more eloquent description than what this author could attempt, and it’s also accurate. 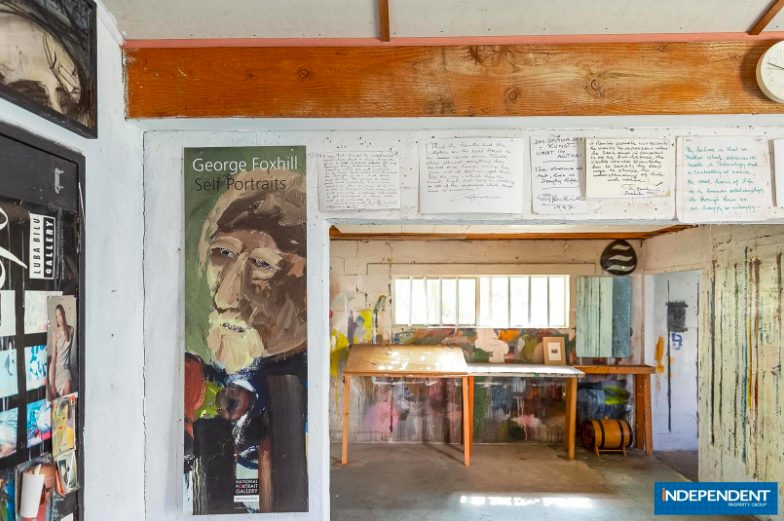 Countless famous artworks were birthed in this studio.

Perhaps unsurprisingly, this home is attracting strong interest from people with hobbies such as pottery and painting. However, Independent Property Group Inner North and City’s Grahame O’Brien says the home would also suit families seeking a well-maintained property in a central location.

“The location is a big drawcard. It’s a quiet little street and close to the Dickson shopping precinct and high schools,” he says.

“Some people have come through and said they’d be interested in converting the studio into a liveable area for their kids, like a teenager’s retreat. Of course, they would have to go through all of the normal approval processes, but people have certainly indicated that type of interest.”

Families will also appreciate the spacious bedrooms and large backyard with ample space for children to play. 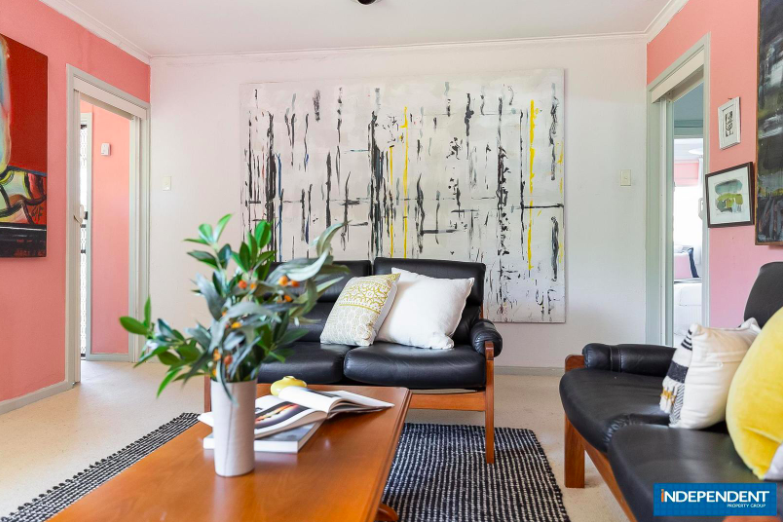 The living areas are well-lit and quirky.

The rest of the home is packed with personality and functionality. Bright colours and patterns adorn the walls, while double-brick construction means that it stays cool even on the hottest summer days.

“It’s a north-facing home with living areas at the front. It’s light and bright, with a great aspect,” Grahame says.

“People love the fact that it’s quite quirky. A lot of the interest we’re seeing is from people who are looking to buy to live in, or potentially rent it out with a view to future development. 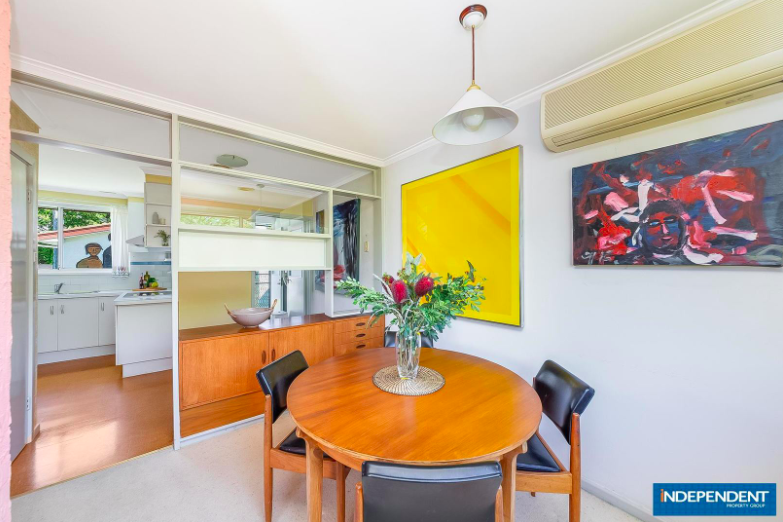 Old meets new in the kitchen and dining areas.

“It’s a nice and unique home. And really, you don’t need to do anything. You can move in and start enjoying it now, which isn’t something you can say about most properties that are sixty years old.”

Charles Black - 7 minutes ago
Ahh yes. It’s a journalist. Let’s simplify everything to a simple “look they are bad” and “let’s make sure we sel... View
HiddenDragon - 12 hours ago
Boiled down, that sounds like an argument for more people on the public payroll in Canberra - good luck with that when the Au... View
Monda Scoltock - 12 hours ago
Alexandra Hunter - no doubt! View
News 34

Peter Bucke - 17 minutes ago
Has it been booked for parking on the nature strip ? View
Bob Foster - 4 hours ago
How long till it gets graffitied??? View
Derek Simpson - 12 hours ago
Steve Ager i think she who must be obeyed would have a differing opinion 😁😁 View
News 25

Amanda Salske - 23 minutes ago
The parents should be given the tests to do at home with their children. I don't feel comfortable having teachers touching my... View
Amanda Salske - 26 minutes ago
No one will be testing my children apart from myself or a doctor. View
Emjay Barker - 45 minutes ago
Daniel Duncan that’s a great idea 🤣 View
News 44

Capital Retro - 42 minutes ago
I know that JC but it wasn't in the link I referred to. The "arms length" ownership is along the same lines as the Canberra L... View
Capital Retro - 46 minutes ago
Never heard of this dude. I note he refers to CGS as a "business" too. How come no one is criticizing the Federal government... View
doomattheend - 11 hours ago
Good to see the Greens MLA attacking a private school for a federal issue rather than keeping the labour party in check. Of c... View
News 316

Kalo Arepo - 2 hours ago
Not only do gum trees fall over at the drop of a hat but they are also potential bombs ready to explode when a bush fire occu... View
Public Sector 14

Mark Johnson - 11 hours ago
Belinda Makrides don’t think it would make a difference. Toyota have a pretty good rep no matter where they are made. The H... View
Mark Wallin - 12 hours ago
A car you operate rather than drive. View
show more show less
*Results are based on activity within last 7 days

Why your strata complex needs a facilities manager

Former goldfields hotel and lockup transformed into a modern home

@the_riotact @The_RiotACT
Peter Walker's overcome some serious battles over the past 20 years, but he says he's ready to take on the #challenge as the new mayor of #Goulburn https://t.co/OCLVo6yk2h (43 minutes ago)