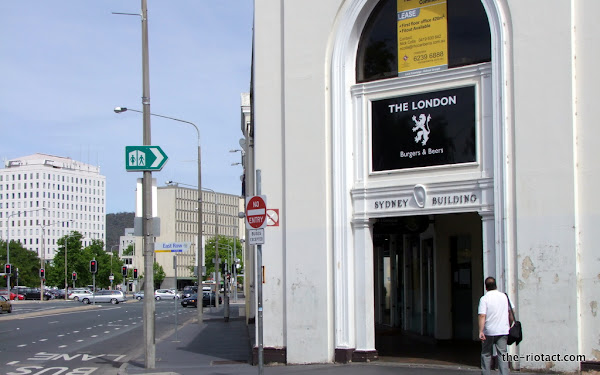 The manager of London Burgers and Beers has criticised ACT police in the Canberra Times today following the raid on his business last October.

The business was closed for a week while police, as well as health and work safety officers, searched the premises for drugs.

”When you’ve got 20-odd police officers in suits, confining you to a booth, while they go through the place from head to toe for 6 hours and find absolutely nothing, it makes you wonder what they base their information on,” Mr Soprano said.

”We had to keep our staff on wages for over a week even though we weren’t open, because people have families to worry about. Effectively, it cost us a lot of money.”

IF this is the same guy featured in Tooks’ link..

IF you are a ‘Colourful Sydney (Dog) Racing Identity’ and the subject of much media innuendo, it makes sense to change your name – fresh start, new city and all that.

But could there be a worse choice than Tony Soprano? Why not go completely brain dead and go with Al Capone?

Dumb AND smartarsed is a bad combination. Well done Plod.

Like I was saying in a previous post – being served your meals by biker/felon looking waiters who look like they want to smack your head in did give the place a really suss feel! The burgers were so good though. I am going to miss a certain flirty Barmaid there too.

Not going there again knowing that Soprano is a known felon.

Good on the cops for pouncing so fast on the business. Even if they didn’t find anything – it’s the thought that counts!

Is it the same Tony Soprano? If so, thats the (fisrt and) last time I’m going to The London!

“ALL muscles and imposing stature, Tony Soprano allegedly did not mince words.

Reminds me of the spoon the Romans found in Life of Brian.

Is it the same Tony Soprano? If so, thats the (fisrt and) last time I’m going to The London!

It’s a bit like that silly story on ABC last week about the “dark secret” of tattoo parlours – that the money really goes to organised crime. Since when was that a secret?

There’s the local restauranteur whose former business partner recently chased him around the kitchen of one of his current establishments with a knife.

Then there’s the local bar owner whose wife’s bar went bust after operating at a loss for years and who himself was found to be in breach of workplace laws around the same time he called in an MP mate to help him skip a DUI charge.

There have been curious brawls, evictions and so on. Asian cafe in Manuka many years ago comes to mind. In fact the bar owner referred to above accused several other bar owners of trying to turf him out to convert the building into a new nightclub.

Wouldn’t it only take 20 minutes for a drug sniffer dog to go through the place?

They’ll be looking for anything that links them with the “motorcycle gangs”, so any financial records. Any sheets of paper with details/names/numbers etc. Weapons that can’t be smelt with a dog. If its not a cash dog, it might not be able to smell cash. etc

Call me ignorant, but 6 hours? Wouldn’t it only take 20 minutes for a drug sniffer dog to go through the place? It’s good enough for airport security…

London Burgers and Beers, it would seem.

Yes, the old “I didn’t do nuffink” defense…

London Burgers and Beers, it would seem.

After reading that statement, i had this mental image of a guy in a white tracksuit and bumbag saying to the police “youse got nuffin on me”.

As #8 said, if his “health and safety” was up to scratch, he would be open 6 hrs later. Having said that, all the computers were taken, which may make re-ordering difficult

I’m pretty sure the Police search took 6 hours but the premises was closed for a week because it took them that long to fix all of the “Minor health and work safety breaches”.
And if nothing was found, why were several items seized?
http://the-riotact.com/police-statement-on-the-london-raid/57708

Probably only 98%. Obviously it’s that 2% that spoil it for everyone.

The guy’s name is Tony Soprano.

Annie Wyer - 40 minutes ago
Mark Ryan actually no, I don’t. But it sounds like you’re a liberal voter who hates contributing towards the common good,... View
Margaret Freemantle - 1 hour ago
Got to be kidding to vote Libs in Canberra!! View
Mark Ryan - 4 hours ago
Annie Wyer sounds like you know someone who got let go from an over inflated over funded lazy parks n gardens service. Vital... View
News 4

Janice Clemson - 1 hour ago
And , yes, we do have excellent water quality 😀🐾🐾🦮🐕‍🦺🦮 View
Janice Clemson - 2 hours ago
Plastic bowls not as easily cleaned as stainless steel. View
Opinion 19

@The_RiotACT @The_RiotACT
From an all-local lineup bushfire benefit show to Abbey Road Live, here are the gigs worth catching in #Canberra this week https://t.co/ga0VbqGlcI (47 minutes ago)