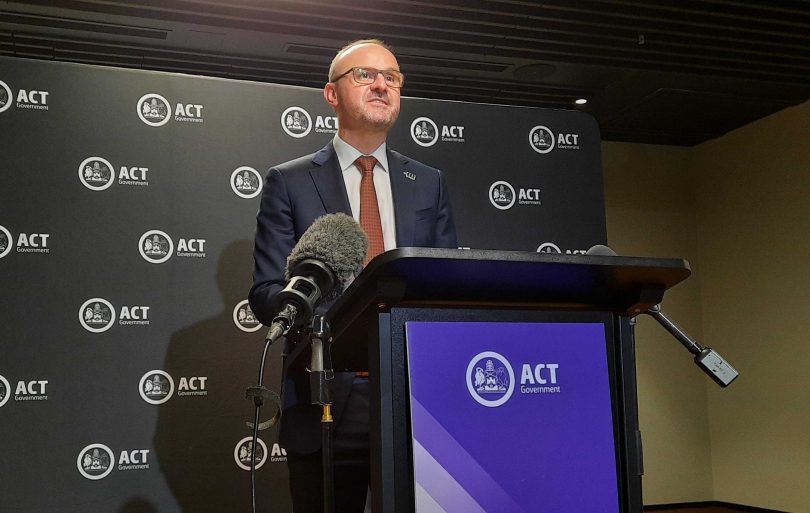 The 2021-22 ACT Budget’s record deficit and debt beg the question of whether the numbers hold any real meaning anymore.

The Territory is far from alone in pulling out the credit card to fund its response to the pandemic and the economic recovery to come, but Chief Minister Andrew Barr assures us that its unprecedented level of debt is manageable and there has never been a better time to borrow given the historically low interest rates.

Should he have gone even further to, say, build even more social housing or push on with the City Cultural Precinct? Hell, why not throw in a stadium as well?

Mr Barr acknowledged it was an opportunity to get things done, but while he is happy to be a Keynesian, there are limits; more practically, to do with having the capacity to actually deliver projects.

As it is, time management has not been one of the Labor Government’s strengths, say when it comes to the Canberra Hospital expansion, although Mr Barr would be the first to remind the critics that the first stage light rail was delivered mostly on time and on budget.

The point is that in a time of uncertainty and supply line and labour issues amid a nationwide infrastructure boom to restart the economy, it is probably wise for the government not to bite off more than it can chew.

The big three – light rail stage 2A, the hospital, and Woden CIT – and the host of other smaller projects that the budget funds is probably enough for the ACT to digest for now.

Mr Barr knows various stakeholders will be disappointed but was upfront when he said some things will just have to wait until the second half of the decade.

It is a shame that the Cultural Precinct and Canberra Theatre redevelopment has been set back a couple of years. There is some money for site investigation but don’t expect a start before 2024-25. A two-year build will take the much-needed project out to probably 2027.

If the government really wants Canberra to be the nation’s arts capital, then this particular project should have been kept on track.

That particular section of the city is desperate for a makeover, as is the dated theatre, and many in the arts sector are losing heart that they will ever see a new precinct.

The impressive Constitution Place development nearby has only highlighted the drabness of the Civic Square surrounds.

The growing Molonglo community can also feel miffed that the land release for the long-awaited Group Centre has been put back until 2023-24.

The business sector has complained that the government has not done enough to support it, particularly the many small businesses affected by or taken out by the COVID-19 restrictions.

It is also worried about workforce shortages and believes Mr Barr could have done more to attract or build the skills the ACT will need.

Throughout the pandemic, the government has been labelled anti-business despite the millions of dollars in support the ACT and the Commonwealth have provided.

In recent times, Mr Barr has had to bear the brunt of criticism that relief was reaching businesses too slowly or not all. Time and time again, he has had to explain that the Morrison Government decided to abandon the efficient JobKeeper scheme for the more complicated state and territory-administered programs.

Industry has to carry part of the blame for skills shortages, preferring to rely on migration to fill gaps rather than invest in training. It is a bit rich to turn around and point the finger at the ACT Government which has done what it can while conservative governments elsewhere have done their best to dismantle TAFE systems.

It is interesting that Mr Barr can hand down a Budget with a nearly billion-dollar deficit and still be told by business that he should have spent more when usually he would have been pilloried for being irresponsible.

Mr Barr is right to predict that when lockdown ends and the economy opens up, the money burning a hole in Canberran pockets will fuel a v-shaped recovery, as will the infrastructure pipeline.

People should also remember that the Budget’s primary goal this time is to deal with the pandemic and its ramifications.

This is a Budget that necessarily has a lot of fish to fry, and an economically conservative Mr Barr still needed to calibrate a way back towards a balanced book, not that that has particular virtue for its own sake.

Even in these expansive times, he can’t please everyone, but it is a Budget that will support business through tough times, protect the vulnerable and, as he says, turbocharge the economy, particularly with the Commonwealth on a similar trajectory.

The challenges remain: the double-edged sword of the housing boom, the balancing act of ‘sustainable’ development, the broken planning system and maintaining first-world services in a jurisdiction that expects the best but has limited revenue options.

Start reducing the speed limits across Canberra should see the budget come into surplus by next year.

Now we just need to figure out what that job is.

Was the Eating Disorders Treatment Facility promised to be in this years budget mentioned?
Surely this is more important than the light rail.

why would you cherry pick which one is the most important… they are both important, just in different ways and to different parts of society…the disabled benefit greatly from the light rail and quite frankly I am getting quite fed up with people forgetting that point.

“….and maintaining first-world services in a jurisdiction that expects the best but has limited revenue options”

That is THE issue in all of this, and it’s the reason why the ACT government shouldn’t be using the cover of the pandemic to pretend that all of its discretionary spending choices are wise and necessary and that there is no alternative.

With the costs of the major programs delivered by state and territory governments (particularly health, as the recent letter from state/territory ministers to the federal government pointed out) rising at a rate far above inflation and growth in household incomes, the space for “nice to haves” in their budgets is shrinking rapidly.

The real crunch will likely come first for the smaller jurisdictions and, even with higher average incomes, may be felt most sharply in the ACT – due to the limited revenue base, and little realistic prospect of broadening the economy much beyond the current reliance on federal administrative spending and the overseas student trade.

When that crunch comes, there may be some very unpalatable choices to be made – something to reflect upon for Canberrans who have recently taken comfort in the relative freedom that the ACT has enjoyed in managing the pandemic independent of decisions made in Sydney and elsewhere.

Point of clarification; When Mr Barr said that the budget contains 3 big projects; light rail stage 2A, the hospital, and Woden CIT, what he meant to say was “light rail” and the hospital.
The new Woden CIT is actually part of the light rail project, because they are demolishing the existing CIT to make room for the Woden light rail station.

What are you talking about, they’re doing nothing of the sort. The old Woden CIT was over at the old high school site and was knocked down because it was full of asbestos.

Rather they’re going to knock down the interchange to make way for the CIT, not the other way around.

I apologise for the error. It’s that unique spider shaped building that is being knocked down for the new interchange / train station.

well only time will tell, wont it

Can we just get Mr Barr’s press release directly copied here next time? It would be more efficient.