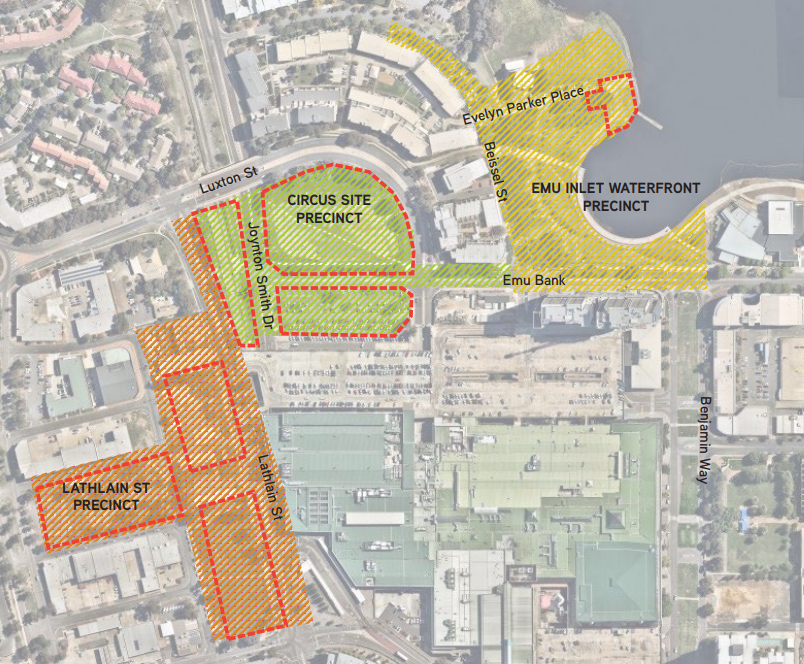 Future development in the Belconnen Town Centre will allow up to 1000 new dwellings and building heights up to 18 storeys, but developers will need to abide by a community-based design brief that emphasises people-friendly places and desirable urban experiences.

The ACT Government has released the Place Design Brief for three areas of the Town Centre identified for development after a six-month community consultation in which people called for an intimate urban experience, better and walkable connections between precincts, open and green spaces, shared spaces and facilities and activated street fronts including cafes, restaurants and bars.

The seven land-release sites are in the Emu Inlet Waterfront by Lake Ginninderra, Circus Site and Lathlain Street Precincts, and the brief outlines what development is allowed and the kinds of landscape, connections and community facilities desired in the areas.

On Thursday (17 June), the Suburban Land Agency released the first stage, comprising the four Emu Inlet and Circus sites, in a request for proposal process that will close on 7 October.

Up to three proponents may be invited to participate in the second stage Request for Tender (RFT) and the process to determine the preferred tenderer. Selected proponents who will be invited to tender are expected to be announced by the end of 2021.

The Lathlain Street sites are scheduled for release in 2022-23.

Residential and commercial development is envisaged in the Circus and Lathlain Street precincts, while Emu Inlet, with its park setting and access to the lake, is considered to be a destination site suited to restaurants and cafes and a water-based recreation business.

Building heights vary across the three areas, with the Emu Inlet waterfront only two storeys, Circus mainly four but up to 12 storeys and the Lathlain Street sites capable of eight to 18 storeys.

The Circus and Lathlain Street precincts could accommodate 500 dwellings each, including a requirement for 50 affordable and 25 public housing dwellings in the Circus Precinct.

The brief says that a double-sided retail/hospitality strip could be developed along Emu Bank, described as being potentially a buzzing little boutique strip.

It envisages mixed residential, offices and retail in Circus, including clusters of small shopfronts along strategic locations of priority streets, key corners or adjacent to open spaces.

A mix of mixed residential, offices and retail, including food and beverage outlets, has been identified for Lathlain Street, where the main street character could be created on Section 21 to complement the hospitality offering on the east side as part of the shopping mall.

This would mean upgrading Lathlain Street into an attractive slow-traffic shared street.

The brief says Section 23 could include community use such as a library or indoor sports facility on the ground floor.

“Lathlain Street will require a significant amount of design consideration and intervention to create and activate an attractive 250m stretch of street frontage,” it says.

Housing and Suburban Development Minister Yvette Berry says the brief will guide future development and ensure developers understand what’s important to the community and develop the sites in line with its aspirations.

“The sales package for the release of key sites along the foreshore will ask for innovative design and development proposals that respond to the Place Design Brief,” she said.

“This will encourage developers to put place planning and people at the forefront of their development proposals.”

To view the Place Design Brief visit the YourSay website.

I recall something from the past about the lakeshore belongs to the people and will NOT be built on???? Oh….that’s not convenient for…..oh….developers???

I’m glad Belconnen is being further developed as a community hub. My main concern are the single lane ‘spokes’ (like Bindubi) that are becoming inadequate to cope with transport to the Parkes Way and Tuggeranong Parkway traffic corridors. One could observe this with the opening of the most recent apartment development despite the increased public transport capacity.

All these buildings. If families move here then where are the playgrounds for kids to be active? What is being done about safe bike transportation routes around the town centre? Increased car traffic? Schools? The closest preschools, primary schools etc are located in the surrounding suburbs.

Sarasi Perera i should buy at belco foreshore 😂😂😂

All these homes… what about a school?

Residents can’t afford kids after paying for their 1BR units (and they wouldn’t fit anyway).

I love Belco as much as anyone! But even I can’t see this being achieved 😂

Vander Leal when they say community they mean committee Of developers

Timmy Holness so true. Builders and developers who are related to the planners 😂😂😂